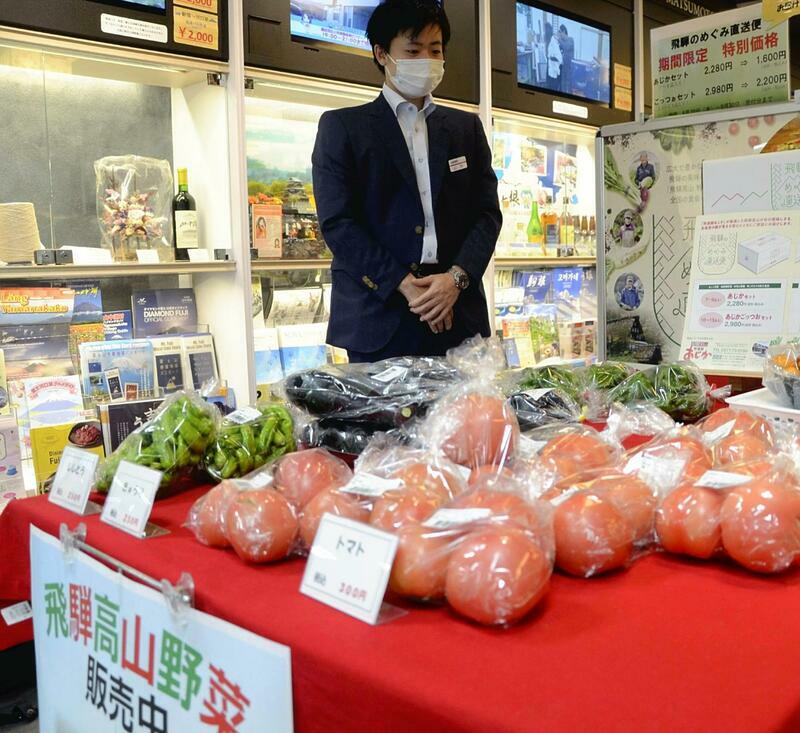 As railway companies are promoting the carrying of cargo in vacant areas of their passenger trains amid the pandemic, a company that has routes mainly in Tokyo looks to deliver produce from Gifu along with passengers to Shinjuku Station in the capital.

Keio Corp. came up with an idea of using its expressway buses to carry cargo before transshipping the freight to Keio trains. Trial runs are being conducted to see whether the business will be practical.

Around noon on Aug. 20, tomatoes, eggplants and shishito green peppers were displayed in the underground shopping mall near Keio Shinjuku Station. The crops were attached with labels from Takayama or Hida, areas of Gifu Prefecture.

The vegetables were harvested the day before in those parts of the prefecture in central Japan. Passers-by stopped to buy some fresh vegetables.

"I was surprised that such fresh vegetables from Gifu are offered in Shinjuku," said an 83-year-old woman who bought tomatoes.

These vegetables are loaded on an expressway bus at a retail facility in Takayama from Tuesday through Saturday. The bus arrives in the capital and drops off passengers in central Tokyo before the cargo is transported to the Keio Group's warehouse in Setagaya Ward.

The next day, the cargo is loaded on a Keio train at Hachimanyama Station, leaving for Shinjuku Station with passengers at 10 a.m. or later. The crops are displayed at Central Honshu Information Plaza in the underground shopping mall at the station.

"Fresh crops are suitable for conveying the charms of each region because they are more understandable as 'local seasonal food' than processed products such as sweets," said Tomohito Shimada, a person in charge at the company.

Railway companies are struggling with the decline in commuters and travelers due to the pandemic, and Keio has also been directly affected. Passenger transportation revenue in the last business year was down about 32% from the previous year to about 54.8 billion yen, and total sales of Keio Group's bus companies was down about 37% to about 15 billion yen.

East Japan Railway Co. has also conducted trials to carry cargo on passenger trains four times since February. It transported vegetables and fruits from Yamanashi Prefecture on limited express trains to sell them at Hachioji Station. This drew people's attention because these regional produce can be eaten the day they were harvested. Normally, it takes two to three days to deliver harvested crops to urban shops.

This type of business model has been difficult for Keio because its trains run mainly in Tokyo except for part of the Sagamihara Line that reaches Kanagawa Prefecture. So the company focused on using expressway buses operated by a Keio Group company.

Gifu Prefecture was chosen for the attempt because the group company has a bus route there. In 1998, Keio Dentetsu Bus Co. began operating an expressway bus connecting Hida-Takayama and Tokyo. Keio has also operated the Central Honshu Information Plaza in Shinjuku since 2016 to offer tourist information on Gifu and nearby regions.

Keio's experiment began on July 27 and the company's staff said that they often see vegetables sell out by the evening.

"After the pandemic is under control, we hope these endeavors will spark people to use such means of transportation to visit the places these produce come from," Shimada said.