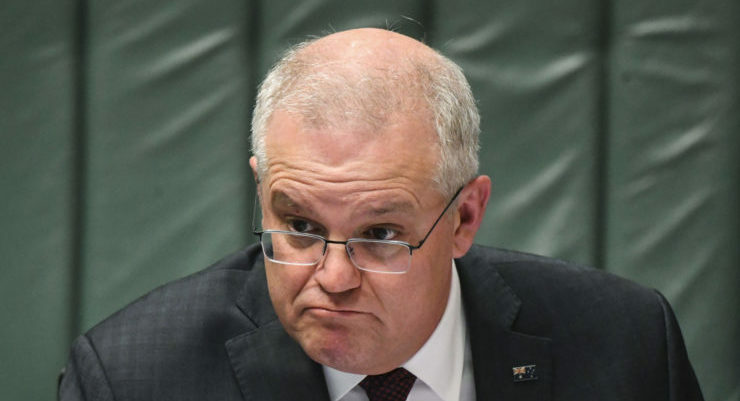 The prime minister is still paying the price for his secret trip to Sydney to see his family for Father’s Day. Day two has provided us with more juicy headlines about the trip, even an inside look at the private jet that ferried him back and forth from the capital.

The outrage can be distilled into two categories: anger over the fact he could see family when others could not (unfair), and that he tried to conceal it (misleading the public).

With much of the population stuck in lockdown for a second year thanks to the federal government’s botched vaccine rollout, Scott Morrison should know that people have no time for either. Instead he has exacerbated both.

Most people wouldn’t begrudge him wanting to see his family on Father’s Day, even if it meant using special exemptions. But once again it’s his office’s attempt to cover it up — even using an old family pic cropped from a picture at a remembrance service for the death of four young people — that has enraged people the most.

Morrison’s obsession with keeping the public in the dark may have worked in his favour in the past, but with a nation under huge amounts of stress it’s starting to backfire.

The same problem is unfolding with his government’s apparent vaccine favouritism. Once again it taps into the two issues proving corrosive in the current environment: unfairness and a lack of transparency.

The story broke on Monday night with 7.30’s chief political correspondent Laura Tingle revealing the extent to which vaccine deliveries were allocated to NSW at the cost of other states.

There is some debate about whether or not the vaccines were, in fact, unfairly prioritised to NSW. But of course truth matters far less than perception in politics.

It’s just another example of an issue that could have been avoided had the government been more transparent and upfront about its strategy for rolling out vaccines in the first place.

The Morrison government’s desperate attempt to keep secret the names of companies who profited off the handout has played into the public’s anger again.

It’s another story of the government’s own making and refuses to go away. It also touches on issues of inequality and lack of transparency.

The attempted cover-up has made matters worse. There is no reason why the government cannot provide the names of those companies, as it does with any company that benefits from a government contract, for example. And it might even stop endless stories being drip-fed to the media.

The electorate has a long memory when it comes to cover-ups and politicians acting above everyone else. Morrison’s lowest approval rating was after the black summer bushfires when he made his “I don’t hold a hose, mate” comments about his secret trip to Hawaii.

Whether the Father’s Day outrage will leave the same mark is yet to be seen. But it has certainly hit Morrison where it hurts — in his carefully crafted image as a dad who believes in fatherhood (perhaps at the expense of others).

Do you think the prime minister should be more open and transparent? Let us know your thoughts by writing to letters@crikey.com.au. Please include your full name if you would like to be considered for publication in Crikey’s Your Say column. We reserve the right to edit for length and clarity.