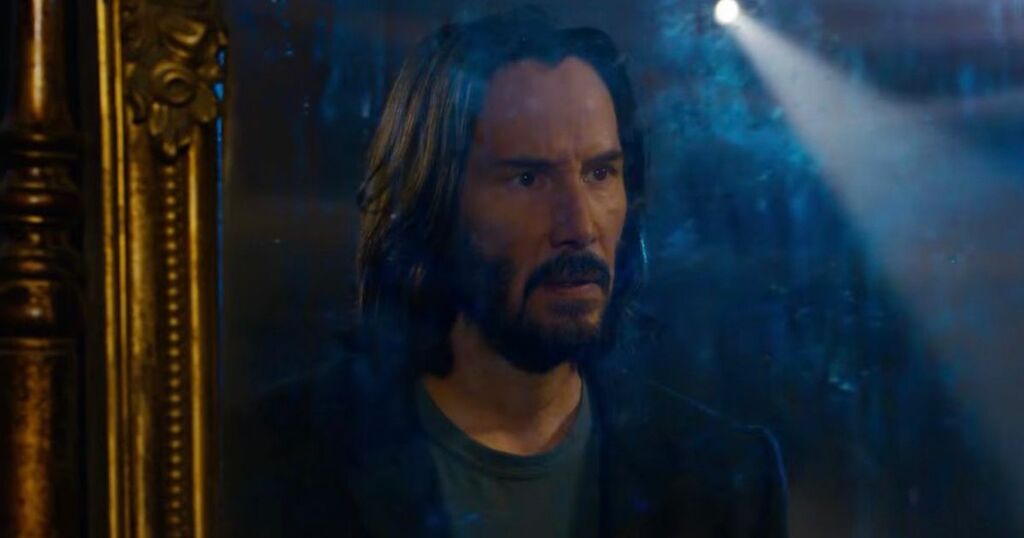 Keanu Reeves reprised his role as Neo in the first trailer for the long-awaited Matrix film, The Matrix Resurrections.

The hotly-anticipated trailer first debuted at CinemaCon last month, and Warner Bros. finally released the first footage from the film today, delighting fans who were over the moon to see Keanu back as leading man Neo.

The trailer begins with Neo, who has reverted back to his original name of Thomas Anderson, in a futuristic San Francisco as he speaks to a therapist, played by Neil Patrick Harris.

“I’ve had dreams that weren’t just dreams. Am I crazy?” he asks, prompting the therapist to reply: “We don’t use that word in here.”

Neo is seen taking prescription blue pills, and he then bumps into Trinity, played by Carrie Anne Moss in a cafe.

Sparks fly as their hands accidentally touch, prompting Neo to ask her: “Have we met?”

As Jefferson Airplane’s 1967 song White Rabbit plays over the trailer, Neo is seen emptying his blue pills into a sink, and he later looks in the mirror, only to be shocked to see a distorted reflection of an old man staring back at him.

He then meets a mysterious man, played by Yahya Abdul-Mateen II, and after a brief meeting, he encourages Neo to take the red pill, telling him: “Time to fly.”

Fans have speculated that Yahya is playing a younger version of Laurence Fishburne’s character Morpheus, as the 60-year-old Oscar-nominated actor was reportedly not asked to reprise his role for the fourth film.

Viewers are then catapulted into footage of high-octane stunts, as Neo is encouraged to go back into the Matrix by newcomer Jessica Yu Li Henwick, whose mysterious character is unknown, and she leads him through a brightly lit door on a rooftop.

The movie, directed by Lana Wachowski, is set to be released on 2 December in cinemas, as well as on US streaming service HBO Max.

Jada Pinkett Smith is also reprising her role as Niobe in the new film, although she doesn’t appear in the trailer.

While new cast members include Priyanka Chopra, Christina Ricci, and a sinister-sounding Jonathan Groff, who appears at the end of the film talking about Neo re-entering the Matrix.

"After all these years to be going back to where it all started, back to the Matrix," he tells Keanu’s character.

Before the trailer was shown at CinemaCon in August, a behind-the-scenes feature was shown to excited audiences at the event, with Keanu and co-star Carrie-Anne discussing how the original Matrix trilogy has affected their lives.

“The first Matrix felt like something beyond yourself… You’ll hear the sentence ‘The Matrix changed my life.’ I say, ‘Thank you, it changed mine too,” he shared.