By Christopher Rickleton with Jonathan Brown in Moscow 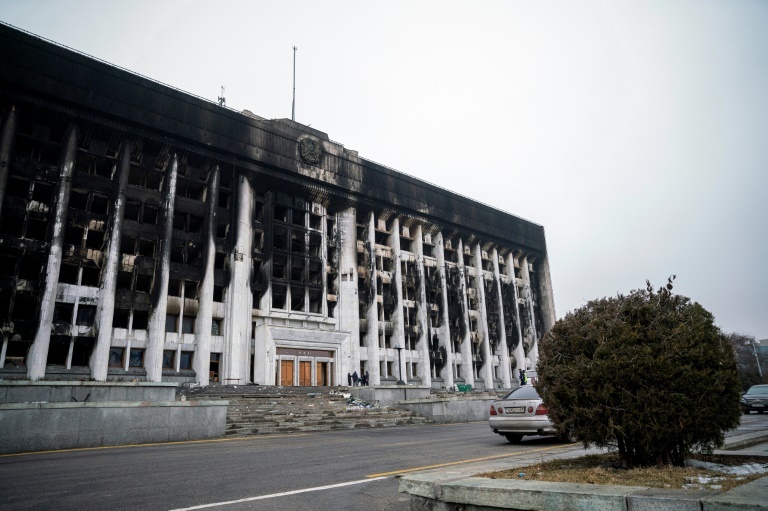 He also insisted that Russian-led troops called in to help quell the unrest were in the country to only protect strategic facilities and would go home "soon".

The Central Asian country is reeling in the wake of the worst violence in its recent history, but life in Kazakhstan's largest city Almaty appeared to be returning to normal Monday as the nation observed a day of mourning for dozens killed.

Tokayev said Monday in a video conference with leaders from several ex-Soviet countries that "armed militants" had used the backdrop of protests -- which began with rallies over a fuel price hike -- to try to seize power.

"It was an attempted coup d'etat," he said.

Kazakhstan and neighbouring Moscow have repeatedly blamed the unrest on forces outside the country, without offering evidence.

The ministers said "foreign mercenaries" were involved "in attacks on civilians and law enforcement officials, the seizure of state institutions and other facilities", according to the Russian foreign ministry.

Almaty, the country's main city and former capital, had been nearly completely offline since Wednesday.Local and foreign websites were accessible again Monday morning but connections were far from stable.

AFP correspondents saw public transport operating there for the first time since the violence, which left government buildings burned and gutted and many businesses looted.

Following a request from Tokayev, the Moscow-led Collective Security Treaty Organisation (CSTO) deployed troops and military hardware to the country.

Concerns have mounted that Moscow could leverage the mission to shore up its influence in Kazakhstan.

US Secretary of State Antony Blinken warned last week that "once Russians are in your house, it's sometimes very difficult to get them to leave".

Putin told Monday's meeting of ex-Soviet leaders that "a contingent of CSTO peacekeeping forces has been sent to Kazakhstan -- and I want to emphasise this -- for a limited time period."

He said measures taken by the CSTO showed that its members would not allow "so-called colour revolutions" to break out in Russia's backyard.

Large protests, Putin added, were "used by destructive forces from outside and inside the country".

Kazakh authorities have struggled to provide a clear and full picture of the unrest.

Tokayev said in the meeting that his country's security personnel "have never fired and will never fire on peaceful demonstrators".

On Sunday, the information ministry retracted a statement that said more than 164 people had died in the unrest, blaming the publication on a "technical mistake".

Officials previously said 26 "armed criminals" had been killed and that 16 security officers had died.

In total, nearly 8,000 people have been detained for questioning, the interior ministry said Monday.

Tokayev dismissed his cabinet last week in an effort to placate the protesters and was expected to present a new government to parliament Tuesday.

On Saturday, authorities announced the arrest on treason charges of Karim Masimov, a high-profile ally of founding president Nursultan Nazarbayev who was dismissed from his post as security committee chief at the height of the unrest.

Nazarbayev, 81, who was widely regarded as holding the strings in the country despite stepping down from the presidency in 2019, has not spoken in public since the crisis began.

The Kremlin declined to say whether Putin had spoken with Nazarbayev as well.

Nazarbayev hand-picked Tokayev as his successor when he stepped down after more than a quarter-century as head of state.