On Aug. 5, 2019, the Bharatiya Janata Party (BJP) government of Prime Minister Narendra Modi revoked the special constitutional status of Indian-administered Kashmir. It did so by using a legislative sleight of hand, relying on its parliamentary majority at the national level. Had it chosen to adhere to constitutional proprieties it would have had to obtain the imprimatur of the local, elected legislature in the state before embarking on the change.

After the ending of its special status, the state was divided into two Union Territories—regions under the direct rule of New Delhi. In practical terms, the termination of Article 370 of the Indian Constitution (as well as an earlier law, Article 35A, which had defined the basis of state citizenship) not only ended the state’s autonomy, but also made it possible for non-Kashmiris to acquire land in the state.

Why did the BJP government resort to this drastic—and possibly legally dubious—tactic?  Ostensibly, the decision stemmed from a desire to improve the socioeconomic status of the state, to boost economic growth, and to facilitate investment. But none of these objectives have been fulfilled in the last year. Despite much talk of a surge of investment into the state, little has materialized. Rights to mineral mines are being sold to non-Kashmiris, with no likely benefit to the local population.

Thanks to the largesse of past governments, the Indian state of Jammu and Kashmir once boasted some of the best social indicators in India. Its Human Development Index, a composite of several social indicators, put it in 11th place among 25 states. It ranked third in terms of human life expectancy and eighth on poverty alleviation. Investment, the one area in which the state was lagging behind the rest of India, had little connection with the constraints of Article 370 and Article 35A, and more to do with its problems with militancy and frequent outbursts of violence.

Fiscal matters aside, there were other reasons for the BJP’s decision to revoke the state’s unique constitutional dispensation. For decades, the BJP and its predecessor, the Bharatiya Jana Sangh, had been ideologically opposed to the Muslim-majority region’s special status. The BJP is keen on changing the demography of the state through a process that may be referred to as “ethnic flooding”—the opposite of ethnic cleansing. With the removal of Article 370, this prospect becomes feasible: Hindus from other parts of India can now legally settle in Kashmir, eventually changing its demographic makeup. Finally, if political turmoil can be contained, India can weaken Pakistan’s legal claim to the state.

A year later, is the Indian state any closer to the realization of its stated goals? The record seems to suggest otherwise. Political activity remains in a state of suspended animation with the entire political establishment either under house arrest or incarcerated under the Public Safety Act. A former chief minister of the state, Mehbooba Mufti, just had her detention extended for an additional three months under the terms of the act. Saifuddin Soz, a long-time member of the Indian National Congress, remains confined to his home in the capital city of Srinagar. And thousands of political activists and protestors remain behind bars both within and outside the state.

Nor has investment started to flow into the state as the government had touted. With high-speed internet and phones shut down until earlier this year, businesses were hardly incentivized to expand their activity in Kashmir. And the lack of communications also ended up worsening health care and education in the region, especially in the wake of the coronavirus pandemic.

Meanwhile, New Delhi continues to increase its militarization of the region. Even before Aug. 5 last year, the government had sent in an additional 38,000 troops to the state anticipating public disturbances.

The region now faces a distinctly uncertain and troubled future. While COVID-19 stalks the world, it is unlikely that Kashmir will experience significant political disturbances. But once the pandemic ends or even significantly ebbs, widespread protests are bound to emerge from a disaffected, sullen, and alienated population. A harsh state response will not quell such demonstrations, but instead draw increased attention to the plight of the hapless Kashmiris. India’s stance on Kashmir has strengthened Pakistan’s resolve to further its strategy of exploiting discord in the region. Islamabad will, in all likelihood, find fertile ground to sow the seeds of insurrection. It is within reason to surmise that Pakistan’s security apparatus will continue to organize, train, arm, and provide sanctuaries to disgruntled Kashmiris who have turned to militancy. Apart from quelling routine street protests, Indian forces will again have to deal with insurgents who will be suitably armed, well-trained, and clearly dedicated to the cause of undermining India’s control over the disputed state.

The question, then, is what possible avenues of action remain open to the government. Given the ideological bent of the Modi-led BJP, New Delhi is prepared to maintain its iron grip on the restive region regardless of moral, human, or material costs. It seems the decision it made last August as irrevocable; To turn back at this point would be a fatal show of weakness.

What about Indian public opinion? Might segments of the country feel any sense of distress about the plight of the Kashmiris who are, after all, fellow citizens of India? Thus far, the signs are far from encouraging. It is true that a handful of political commentators and public intellectuals have criticized the government’s actions in Kashmir with both courage and verve. But the majority of the population, especially under the dire conditions of the pandemic, will remain mostly preoccupied with their everyday lives. It is hard to visualize how their stance on Kashmir will shift anytime soon.

With the exception of Pakistan, none of India’s smaller neighbors are in any position to question New Delhi. China, however, expressed its dissatisfaction with India’s decision last August. To that end, it may well have chosen to stir trouble in Kashmir’s northernmost area, Ladakh, in May and June of this year when troops from the two countries came to blows. But given its own treatment of minorities, especially the Uighurs and the Tibetans, Beijing is hardly able to comment on Indian policy with any moral authority.

Other key members of the global community have only issued anodyne statements gently urging India to ease the terms of its lockdown in Kashmir. Even these unobjectionable remarks have been met with a shrug in New Delhi. Given this configuration of national, regional, and global forces the future of Kashmir looks particularly bleak. The BJP knows that if it lifts its restrictions on the internet and public gatherings, protests may ensue, and that’s why it is likely to maintain the status quo no matter the economic costs. As long as most non-Kashmiri Indians accept this eventuality, little can change. 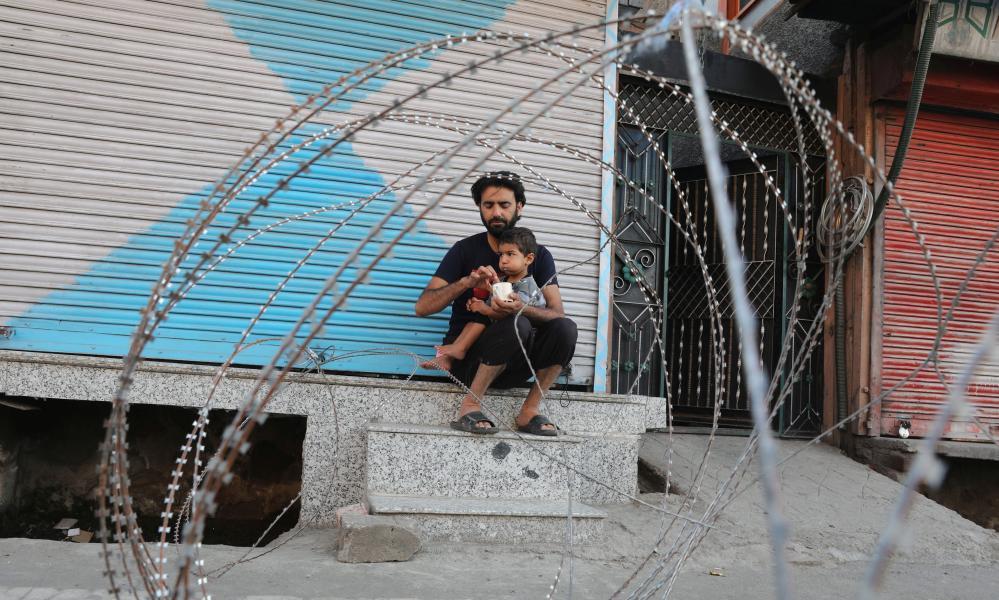 'Our identity has been robbed': life in Kashmir after a year of crisis
On 5 August 2019, India revoked the Muslim-majority territory’s semi-autonomous status and began a devastating crackdown

Authorities enforced security restrictions in many parts of Indian-controlled Kashmir, a year after New Delhi revoked the disputed region’s semi-autonomy…

Irish Independent
A year on, Article 370 and Kashmir mythmaking