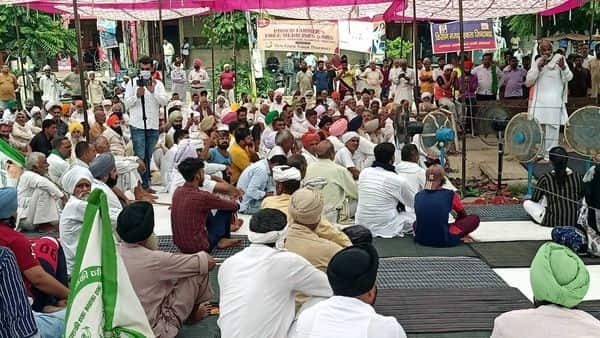 Two family members of Satish Kajal, the farmer who was allegedly killed in the lathicharge by Karnal police on August 28, will be compensated with jobs at the deputy commissioner (DC) rate on sanctioned posts, informed Haryana Additional Chief Secretary Devender Singh.

"After holding talks with farmer leaders who are also present at today's joint press conference, the state government has decided that the deceased farmer Satish Kajal's two family members will be compensated with jobs at DC rate on sanctioned posts," said Singh.

The probe will be conducted by a retired judge, Haryana Additional Chief Secretary Devender Singh told the media in Karnal. The probe will be completed within a month and former SDM Ayush Sinha will remain on leave during the time, Singh added.

Farmer leader Gurnam Singh Charuni said, "We had demanded jobs for two members of the family (of the farmer who was allegedly killed in the lathicharge by Karnal police on August 28) as compensation for his death which was accepted by the government. And they will get jobs within one week."

"We had also planned to file an FIR against the SDM and other police officials. We also took advice from our lawyers and other farmer leaders and we came to the conclusion that even if the administration agrees to files an FIR later there are high chances that the FIR filed on the basis of our complaint gets cancelled. The police officials can say that we were on police duty and gave orders as per the situation. So there are high chances of them to escape," said the farmer leader.

"But if a retired judge of the high court conducts an enquiry then there are fewer chances of influencing the charges. We had demanded a probe in the August 28 Bastara toll incident which has also been accepted by the government," added Charuni.

Haryana Police had on August 28 conducted a lathi-charge on protesting farmers near the Bastar toll plaza in Karnal, where farmers had gathered in large numbers to protest against a programme that Chief Minister Manohar Lal Khattar was scheduled to attend.

All India Kisan Sabha (AIKS) had alleged that Kajal, who belonged to Karnal district had "received severe blows in the atrocious police lathi charge" and died of a "heart attack".

The farmers had been demanding the suspension of Sinha, who was caught on tape allegedly telling policemen to "break the heads" of farmers if they cross the line. About 10 protesters were hurt in the clash with police in Karnal on August 28 when they tried to march towards the venue of a BJP meeting.

*With inputs from agencies