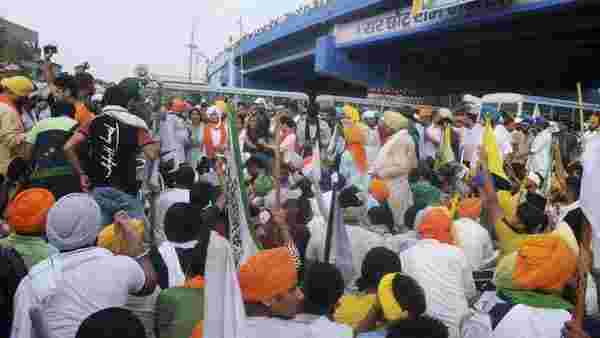 Farmers have continued to a sit-in protest at the Mini Secretariat in Karnal, Haryana on Wednesday.

Farmers held a march and gheraoed mini secretariat on Tuesday over the August 28 lathi-charge incident. The farmers have been demanding immediate action against former Karnal SDM Ayush Sinha who was seen in a video asking the police personnel to smash heads of protesting farmers on August 28.

Meanwhile, the Haryana government has temporarily suspended mobile internet and SMS service in the district to prevent any disturbance to the peace and public order.

The suspension of the telecom services will remain in effect till 11:59 pm on Wednesday.

1. The Samyukta Kisan Morcha, which is heading the farmers' agitation against three farm laws, has given a call for gherao of the secretariat demanding registration of an FIR against those officers who had allegedly ordered a lathi charge on agitators during their protest against a BJP event in Karnal on August 28

2. Farmers have said that they would continue to sit in at the mini secretariat till the government accepts their demand.

3. A large number of farmers squatted at the gates of the district headquarters in Karnal, locked in a showdown with Haryana's BJP-led government over a police lathi-charge last month.

Marching on foot from the mahapanchayat venue to the mini-secretariat five kilometres away, farmers faced a water cannon as they neared the complex. They jumped some barricades, but there was no other serious confrontation with police along the way.

The protesters are demanding action over a police lathi charge in Karnal on August 28.

4. The gherao at the mini-secretariat centers around IAS officer Ayush Sinha who was later transferred out as part of a larger bureaucratic shuffle.

The officer had been caught on tape allegedly telling policemen to "break heads" if the protesters crossed the line.

Prohibitory orders under Section 144 CrPC banning gathering of people were imposed in Karnal district on Tuesday.

5. According to Samyukt Kisan Morcha (SKM) leader Yogendra Yadav, the farmers insisted only on the suspension of the IAS officer, and no other demand was raised yesterday.

BKU leader Rakesh Tikait said the state government is not listening to the farmers. “The Khattar government should agree to our demands or else arrest us. We are ready to fill Haryana's jails."

However, Yadav said that the administration rejected the demand for any immediate action against the IAS officer.