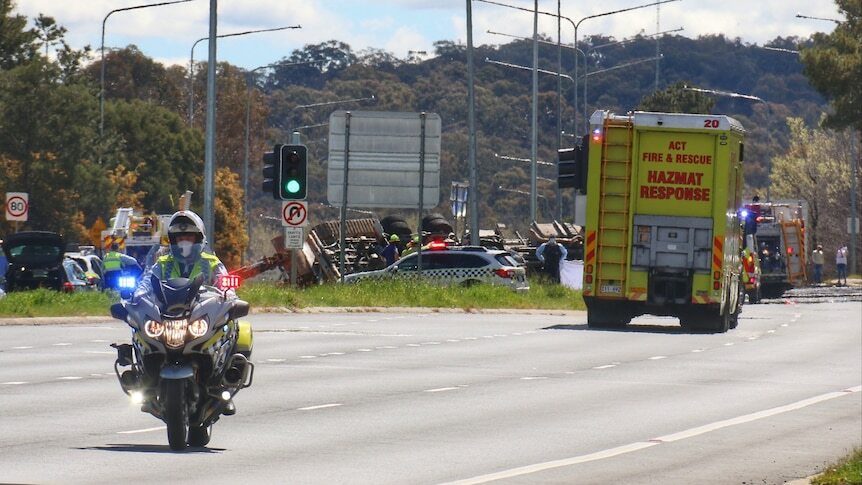 A 27-year-old man from Karabar in NSW will face charges in relation to a fatal collision on the Barton Highway in Canberra's north last month.

One man died at the scene, and another suffered "extensive injuries".

ACT Policing today announced the 27-year-old, who was driving a tow truck, will face culpable driving and drug driving charges, and issued a summons for him to appear in court.

Police allege that at about 11:30am on September 15 the tow truck, which was carrying a ten-tonne excavator, crashed into a Ford Falcon sedan west of the Gungahlin Drive bridge after running a red light.

They said both the truck and the Ford Falcon then struck a third vehicle, a Toyota Land Cruiser, which was thrown 50 metres by the impact.

The Ford Falcon and the Land Cruiser were both turning right at the intersection, while the truck was travelling northbound.

ACT Policing Detective Acting Superintendent Donna Hofmeier said the tow truck driver, who was unharmed in the collision, had been taken to hospital for mandatory blood and urine testing, and that the presence of cannabis was detected.

She said police would allege he continued through the intersection at 80 kilometres per hour, against a red traffic signal.

She said the crash was "completely avoidable".

"While it is now up to the courts to decide what happens next, what we have here are the results of a driver running a red light," Detective Inspector Hofmeier said.

She said it was understood the deceased male had been on his way to a COVID-19 testing site when the collision occurred.

The driver of the Land Cruiser's life had also "changed dramatically" as a result of his injuries, she said.

"One family has lost a loved one, another family ... has his whole life changed," she said.

Detective Inspector Hofmeier urged drivers to take care when driving as the ACT emerged from lockdown.

"We're now coming out of lockdown, there's going to be a lot more people on the roads," she said.

The 27-year-old man could face up to 16 years in jail if found guilty.

He will appear in court next month.