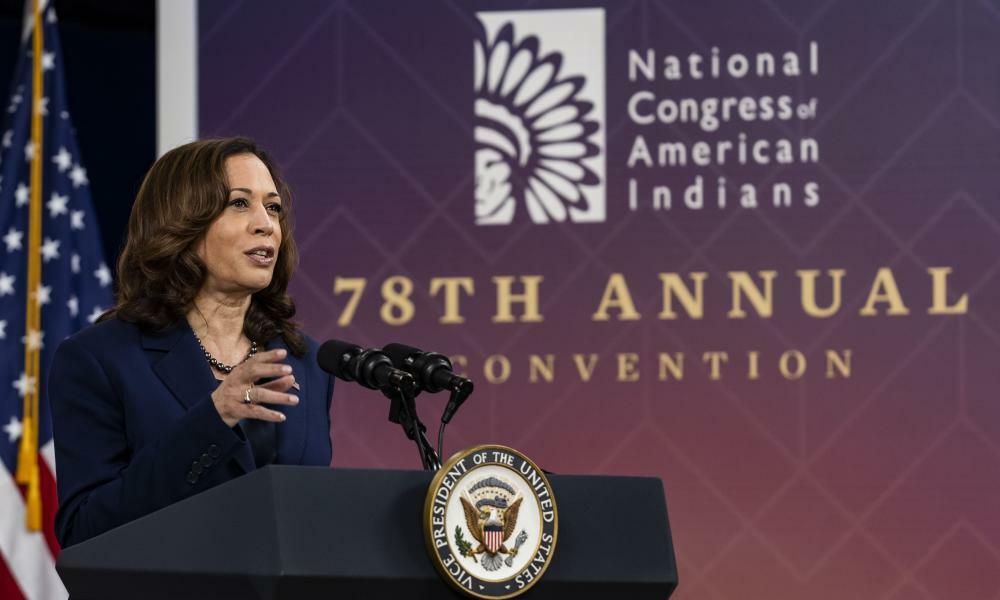 Promising to speak the truth about American history, Kamala Harris told the National Congress of American Indians the Biden administration would not shy from a history since the first arrival of European explorers that she said was “shameful”.

The US vice-president also highlighted an “epidemic” of murders of Native American women and girls, which she said “must end”.

Harris delivered a virtual address the day after a federal holiday originally named for Christopher Columbus, the Italian explorer who arrived in the Americas in 1492.

The naming of the holiday for Columbus, a slave-holder and trader who brought disease as well as oppression to the Americas, has proven increasingly controversial, criticized on the left and defended on the right and among some Italian heritage groups.

“It is an honor,” Harris said on Tuesday, “to be with you this week, as we celebrate Indigenous Peoples Day. As we speak truth about our nation’s history.

“Since 1934, every October, the United States has recognized the voyage of the European explorers who first landed on the shores of the Americas. But that is not the whole story. That has never been the whole story.

“Those explorers ushered in a wave of devastation for tribal nations, perpetrating violence, stealing land and spreading disease. We must not shy away from this shameful past. We must shed light on it and do everything we can to address the impact of the past on Native communities today.”

Indigenous people protested outside the White House on Monday, starting a concerted effort to focus attention on the effects on their communities of fossil fuel and climate crisis policies.

In Lafayette Square, named for a hero of the revolutionary war, the words “Expect Us” were spray-painted on the base of a statue of Andrew Jackson, the seventh president, who led efforts to displace and exterminate Native American peoples.

In a bitterly divided country, the teaching of American history has become a political flashpoint, attempts to tell a full story of racism and oppression as well as revolution, war and nation-building attracting fierce attacks from conservatives, from school boards to universities, the media and beyond.

Disappearances of Native American women have also come under the spotlight, a lack of attention to such crimes condemned by advocates amid a media frenzy over the disappearance and death of a white woman, Gabby Petito, in Wyoming.

Harris said: “We know that Native women and girls are missing and murdered at alarming rates. This is an epidemic, and it must end.

“We also know that Native American voters are being systematically denied access to the ballot box, which is why we must pass the Freedom to Vote Act and the John Lewis Voting Rights Advancement Act.”

Efforts to pass voting rights protections, against laws implemented by Republicans at state level and targeting communities more likely to vote Democratic, have been stymied by Republican opposition in Congress.

The filibuster, a rule by which most legislation requires a 60-vote majority to pass, means progress is unlikely. Joe Biden, for decades a senator devoted to working across the aisle, has resisted calls to remove the obstruction.

Harris also noted the disproportionate effects of the coronavirus pandemic on Native Americans, who like other minority groups can struggle to access healthcare and education resources.

Touting the administration’s Build Back Better Act, a package of spending priorities worth trillions but held up by differences within Democratic ranks, Harris announced the “reopening of our memorandum of agreement on the 477 program”.

That Department of the Interior initiative, she said, “gives tribes the power to make decisions about how best to integrate and deliver federal services within your nations.

“I know that this is an action that many of you have asked for, and I’m optimistic that together, we will be able to renegotiate this agreement to support tribal sovereignty.”