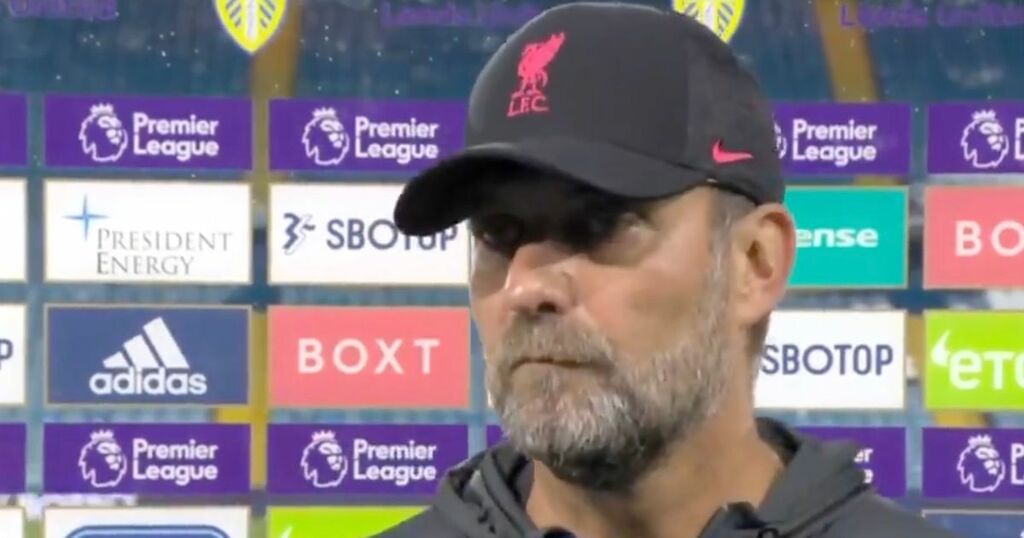 The Reds ran out 3-0 winners at Elland Road but the match was marred by the 18-year-old suffering a suspected broken ankle.

In the 58th minute, Leeds defender Pascal Struijk made a lunge on Elliott just beyond the halfway line and the Dutchman badly caught the youngster.

Struijk was sent off by referee Craig Pawson as the stadium went eerily quiet.

Liverpool had taken the lead in the 20th minute through Mohamed Salah, who netted his 100th Premier League goal.

Salah's strike was followed up by Fabinho as the Brazilian finished off a goalmouth scramble.

Sadio Mane then round off the three points by smashing in from close range after good work from Jordan Henderson and Thiago.

Post-match, a devastated Klopp - lost for words at one point - spoke to Sky Sports regarding the main talking point of the match.

"It is a bad injury. Ankle. I heard it was dislocated and we could put it back, he's now in hospital," he revealed. "He played an incredible game, an incredible player.

"Now he's out. Do I want such a young boy to have this experience so early in his career? No."

Klopp added: "We will play without him but we will wait for him. He's a top top player. I saw the situation, I saw his foot not in the right place, that's why we were shocked. That's it.

"Nothing important [to referee]. I am not sure it's the right moment to speak about this kind of things. It wasn't important, really."

On the result, the German was full of praise with his players as they made it 14 successive games unbeaten and rose up into third place in the table, trailing Chelsea and leaders Manchester United on goal difference.

Klopp's side were dominant and had 30 shots in the match, taking their tally to 100 for this term.

Virgil van Dijk also spoke on Elliott and added: "First of foremost, all our thoughts and prayers are going to Harvey.

"Hopefully he reverse quickly and as good as well possible from it. Obviously we have no idea of the diagnosis at the moment but it did look bad. Apart from that it was a fantastic win here."

Elliott posted on Instagram after being stretched off and receiving further treatment: "Thank you for the messages guys! Road to recovery stars now.

United's Marcus Rashford tweeted a message of supporting, writing: "Ahhhh man rivalry aside that looks really nasty, no one wants to see that, thoughts are with you Harvey."