A judge in Georgia on Friday found that U.S. Rep. Marjorie Taylor Green can run for reelection, rejecting arguments from a group of voters who had challenged her eligibility over allegations that she engaged in insurrection. But the decision will ultimately be up to Republican Secretary of State Brad Raffensperger.

State Administrative Law Judge Charles Beaudrot announced his decision after a daylong hearing in April that included arguments from lawyers for the voters and for Greene, as well as extensive questioning of Greene herself.

State law says Beaudrot must submit his findings to Raffensperger, who has to decide whether Greene should be removed from the ballot.

The challenge to Greene’s eligibility was filed by voters who allege the GOP congresswoman played a significant role in the Jan. 6, 2021, riot that disrupted Congress’ certification of Joe Biden’s presidential election victory. That puts her in violation of a seldom-invoked part of the 14th Amendment having to do with insurrection and makes her ineligible to run for reelection, they argue.

During the April 22 hearing on the challenge, Ron Fein, a lawyer for the voters who filed the challenge, noted that in a TV interview the day before the attack at the U.S. Capitol, Greene said the next day would be “our 1776 moment.” Lawyers for the voters said some supporters of then-President Donald Trump used that reference to the American Revolution as a call to violence.

“In fact, it turned out to be an 1861 moment,” Fein said, alluding to the start of the Civil War.

Greene is a conservative firebrand and Trump ally who has become one of the GOP’s biggest fundraisers in Congress by stirring controversy and pushing baseless conspiracy theories. During the recent hearing, she was defiant as she was questioned under oath by Andrew Celli, another lawyer for the voters. She repeated the unfounded claim that widespread fraud led to Trump’s loss in the 2020 election, said she didn’t recall various incendiary statements and social media posts attributed to her and denied ever supporting violence.

At times, when confronted with evidence of a particular social media post or comment that she said she didn’t remember, Greene said her staff sometimes operated her accounts or that her words were being misinterpreted or were twisted by news outlets.

Greene said she and her staff were busy preparing to object to the certification of electoral votes for Biden and while she acknowledged encouraging a rally to support Trump, she said she wasn’t aware of plans to storm the Capitol or to disrupt the electoral count using violence. Greene said she feared for her safety during the riot and used social media posts to encourage people to be safe and to remain calm.

The challenge to her eligibility is based on a section of the 14th Amendment that says no one can serve in Congress “who, having previously taken an oath, as a member of Congress ... to support the Constitution of the United States, shall have engaged in insurrection or rebellion against the same.” Ratified shortly after the Civil War, it was meant in part to keep representatives who had fought for the Confederacy from returning to Congress.

Greene “urged, encouraged and helped facilitate violent resistance to our own government, our democracy and our Constitution,” Fein said, concluding: “She engaged in insurrection.”

James Bopp, a lawyer for Greene, argued that his client engaged in protected political speech and was, herself, a victim of the attack on the Capitol, not a participant. He also argued that the administrative law proceeding was not the appropriate forum to address the weighty allegations brought by the voters.

The challenge amounts to an attempt “to deny the right to vote to the thousands of people living in the 14th District of Georgia by removing Greene from the ballot,” Bopp said.

The challenge to Greene’s eligibility to run for reelection was filed by five voters who live in her district, and the procedure for such a challenge is outlined in Georgia law. The law says any voter who’s eligible to vote for a candidate can challenge that candidate’s qualifications by filing a written complaint, triggering a hearing before an administrative law judge. Beaudrot’s decision is not binding on Raffensperger, who must determine if Green is qualified to run for reelection.

Once Raffensperger makes his decision, either side has 10 days to appeal it in Fulton County Superior Court. Raffensperger is facing a Republican primary challenge on the May 24 ballot after he refused to bend to pressure from Trump to overturn Joe Biden’s victory in Georgia. Raffensperger has decried the 2021 attack on the Capitol, writing in his book that he found it “highly objectionable” that “people are now trying to minimize what happened on January 6.”

The Georgia complaint was filed by Free Speech for People, a national election and campaign finance reform group, on behalf of five voters who live in Greene’s district. The group filed similar challenges in Arizona and North Carolina.

Greene has filed a federal lawsuit challenging the legitimacy of the law that the voters are using to try to keep her off the ballot. That suit is pending. 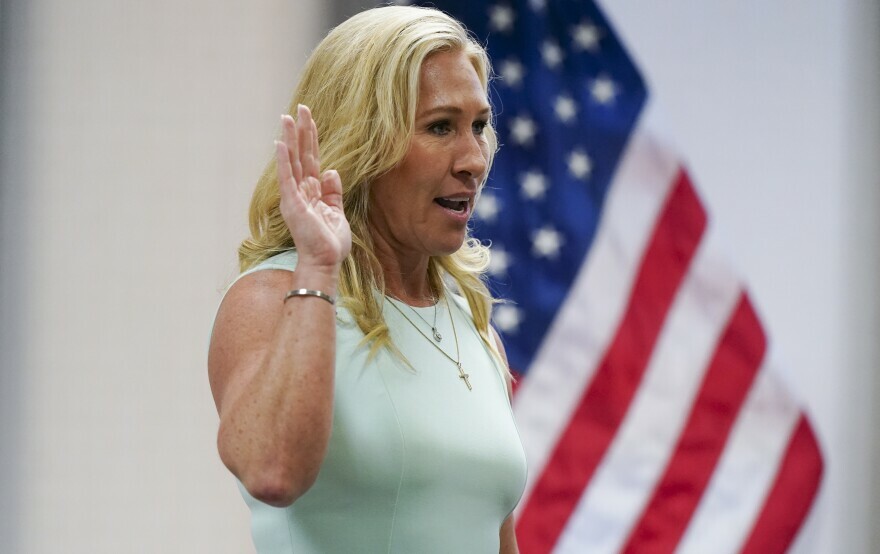