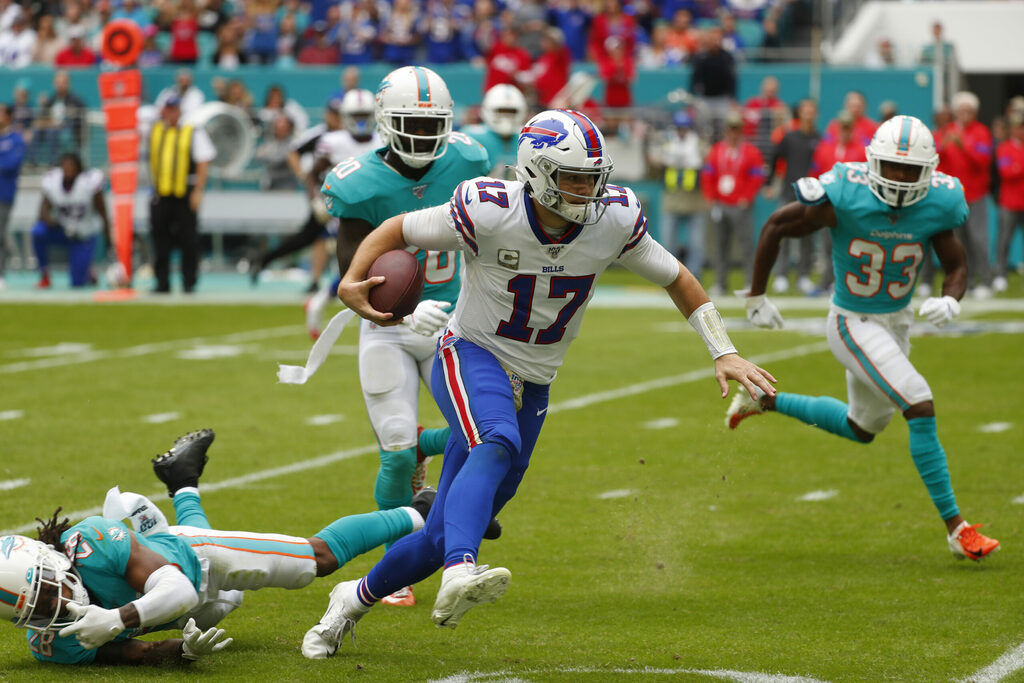 For the Miami Dolphins to push their 2021 record to 2-0 this weekend, they’re going to need to do something they haven’t had much success with in general: slow down Buffalo Bills quarterback Josh Allen. Allen has been a habitual thorn in the side of the Miami Dolphins for the last three seasons; as Miami seems to always get Allen’s best play during their bi-annual matchups.

Miami had an encouraging start to the season playing ‘bend but don’t break’ football against a rookie quarterback in Mac Jones. But now comes a completely different test: slowing down an MVP candidate.

Dolphins defensive coordinator Josh Boyer understands the challenges at play. And he believes that the key to defending all of the dynamics Allen presents on any given week is to play sound, disciplined football on defense.

“I think we’ve got to play good assignment football. Guys that are assigned to play the pass need to play the pass. The guys that are assigned to play the run or the quarterback scramble, they need to be able to play that. Obviously he does a good job when he’s running the ball and he does do a good job when he’s on the move of looking downfield and making plays there. He’s got guys that get open when he extends plays. It’s very challenging. I would say I go back to Brian Daboll and he puts them in very good schemes to make it very difficult to defend,” said Boyer on Tuesday during a meeting with the press.

“I think Josh Allen is a very good quarterback in this league. I think their offensive staff has done a great job with him. You can see his progression over the years and I would say Josh Allen plays the quarterback position as good as anybody. He does a really good job for them. He can read defenses. He makes good decisions. He’s got a strong arm. He can make all of the throws. I think what you try to do is what we try to do every week. You try to put pressure on the offensive line. You try to put pressure on the quarterback and obviously you don’t want to sit in the same thing over and over again because that will make it a little easy for him; but you also want to put your players in a good position to succeed. I think there is a variety of things that people have tried to do to him. He’s seen it all. He’s seen it all over the last handful of years and he’s obviously done a great job with that. We’ve got a big challenge in front of us this week.”

Indeed they do. And should the Dolphins find the right formula and emerge victorious on Sunday, the hype and energy surrounding this Dolphins team is going to reach an all-time high under the current administration. It’s a high-stakes affair — and Miami can change a lot of narratives about themselves as a football team by solving a very important (and yet very simple) question:

How do the Dolphins finally slow down Josh Allen?