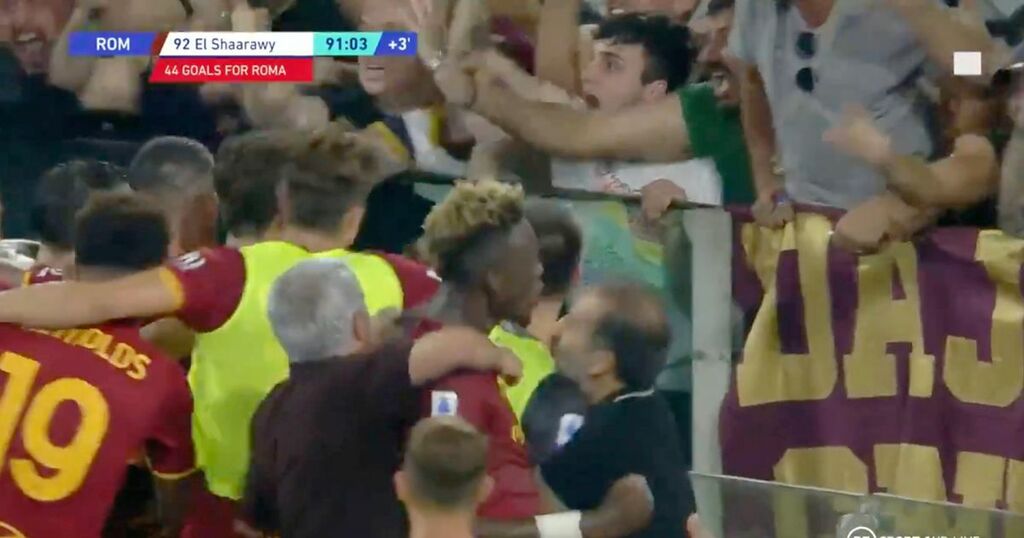 Jose Mourinho recreated his famous celebration of running down the touchline as his Roma side grabbed a dramatic last-minute winner in his 1000 th game in management.

Stephan El Shaarawy curled in a superb effort in injury time to secure a late 2-1 win for the Italian capital club against Sassuolo in the landmark match for the Portuguese boss.

The goal from the Egyptian winger sparked wild celebrations from Roma’s players and fans, with Mourinho sprinting down the touchline alongside several members of his coaching staff to join in the celebrations.

It was a moment from the boss that will draw inevitable comparisons to his celebration when his FC Porto side netted a decisive injury-time goal against Manchester United in the Champions League in 2004.

Costinha’s goal for the Portuguese champions was what brought Mourinho into the conversation in mainstream football and four months later, the boss was appointed at Chelsea having guided Porto to a stunning Champions League title.

The boss later wrote in his book, Mourinho : “Why not celebrate this way?

“This is surely an iconic picture in my career. A 50-metre sprint at Old Trafford. The next day I had two big English clubs knocking on my door. A blue and a red.

“Players, subs, manager, flag! Madness, but madness from our heart.”

As with everything Mourinho does, there was an element of premeditation and attention-seeking but there was undoubtedly some spontaneity and instinctive in Mourinho’s Old Trafford celebration, in which he joined the joyous mob of Porto’s celebrating players.

This was recreated in Sunday night’s Serie A match, with El Shaarawy’s late winner meaning Roma have now won all five matches under their new boss - including each of their three outings in the league to date.

Can Mourinho rekindle his glory days at Roma? Let us know in the comment section below

It came on a momentous occasion for Mourinho, who went on to admit that it was a special night for him and the victory was extra special.

Mourinho said after the game: “I told everyone lies! I had been saying to the team for days that this 1000th game was not important to me… but I had an incredible fear of losing!

“Luckily we won and I was running like a child today because I was feeling 12 years old, not 58.”

The 58-year-old’s extensive stint at the dugout has enjoyed plenty of highs and endured a few lows, while he has won a total of 25 trophies across his illustrious career.