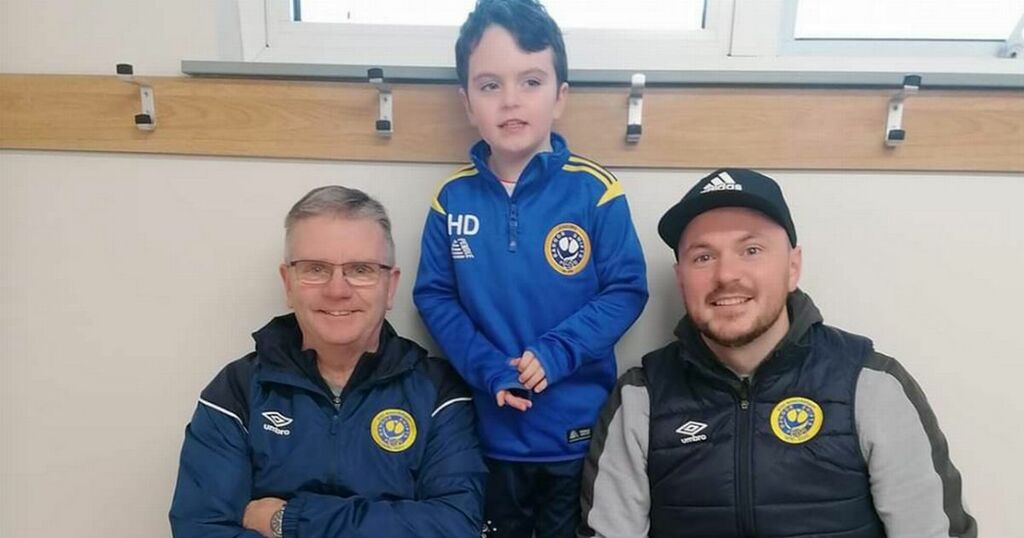 Jordan Dalzell reckons part one of his mission at Bangor Swifts has been delivered after his hat-trick in a 6-0 win at Clonard on Saturday all but guaranteed the club’s safety in 1C.

And now it’s time for part two: making the club a force again in the division.

Dalzell dropped from the Premier Division down into the Intermediate bloc’s basement tier in September, citing personal circumstances and his inability to commit to what is required in the Amateur League’s top flight as his reasons for making the move.

But he’s returning to a club he knows well, and one which is close to his heart, with his father-in-law Hugh Wilson part of the management set-up there alongside Danny Kelly, Gerard Murray and Mark Delargy.

Dalzell made his name at the St Columbanus College club, his goal record there convincing then Abbey Villa boss TJ Young that the young striker was ready for the step up to 1A.

And of course he was, with Dalzell going on to prove himself in the Premier Division, even earning a call-up to the Britton Rosebowl team.

But much has changed in the intervening eight years or so at the Swifts.

Analysing where the club is right now, Dalzell reckons boss Kelly is in the midst of a rebuilding job, but he’s confident with the low average age of the first team now, and the youngsters breaking through from the flourishing academy, that the Swifts can become properly competitive again.

“It’s a young side, and whenever we come up against the top sides in 1C, the likes of Holywood, Greenisland and Plunkett, we struggle a bit,” admitted Dalzell (32), who is now on 10 goals in his second spell at the Swifts.

“But against the teams in the lower half of the league, we always hold our own.

“Even since I’ve been back, there has only been two matches where we’ve been out of the game at half-time, for the most part we’ve been in the games.

“In this league, if you have a half-decent squad, you’ll do well. I think that top half is strong, and they would all probably do well in 1B too, Rosemount have proved that this year.

“For us, I’m hoping to get a couple of good friends of mine back for next year; with what we’ve got and what we’ve got coming through, I think with four or five additions in the summer, which I’m nearly working on already, I think we could get into the top half at least, and then it’s what’s around you after that on if you’ll get promoted or not.

“I’m not saying we’ll get promoted next season, but we want to get out of that bottom half scrap and start challenging in the top half.

“We’ll see what happens, and plus there’s not too many teams that have three teams out on the pitch every Saturday, and the youth set-up from 2016 right up to under-18s is phenomenal, so I think we’ll start to see the benefit of that, and the youth coming through, over the next few years.”