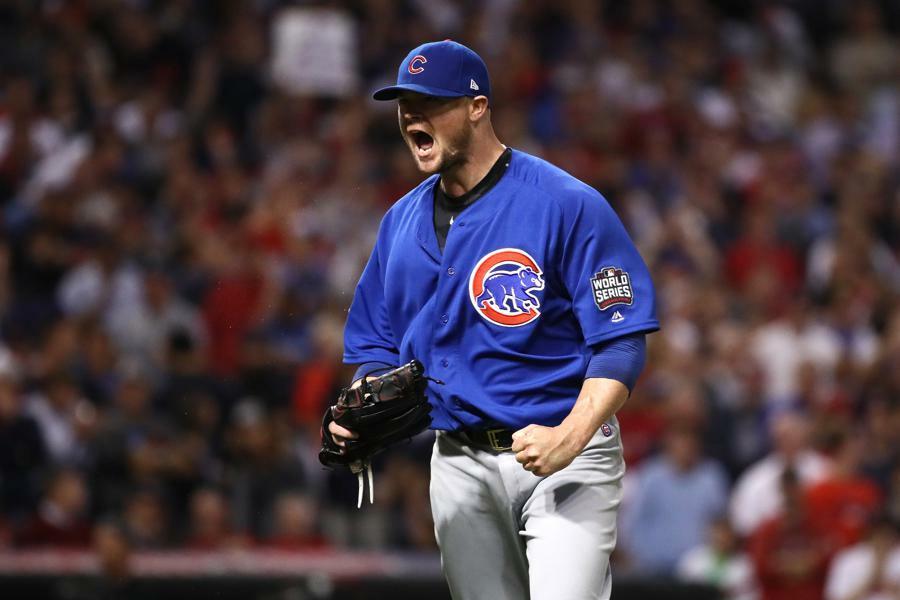 Jon Lester retired Wednesday ending a career of 200 wins, which makes you wonder how much it means for his Hall of Fame candidacy when he becomes eligible and also recall his place in the Red Sox-Yankee rivalry that saw him make 29 starts in and post a 13-6 record.

While his recent career highlights include the impressive run with the Chicago Cubs that was highlighted by the ending of the 108-year championship drought with the dramatic Game 7 win over Cleveland in the 2016 World Series, the other part of his career is his arrival on the scene of the Red Sox-Yankee rivalry.

By the time Lester made his major league debut in June 2006, the Red Sox already ended their drought in 2004. He was a second-round pick with a $1 million signing bonus so there was the expectation that one day Lester might become a significant figure in Red Sox history and in their storied rivalry with the Yankees and while he missed out on the epic comeback in 2004 due to timing of his career, the left-hander had plenty of experiences in the rivalry as the scales went in favor of the Red Sox, then to the Yankees and back to the Red Sox.

For Lester the call came on June 10, 2006, two days after the Red Sox dropped two of three at Yankee Stadium and headed into his debut with a 34-23 record. His first foray into the rivalry was Aug. 18, 2006 and it did not go well as Lester allowed seven runs in 3 2/3 innings, setting the tone for a five-game Yankee sweep that essentially secured their division title.

Lester fully emerged in the second half of 2007 after successfully treating lymphoma. While he did not face the Yankees, he went 4-0, including a win that came a day after Clay Buchholz’s no-hitter and helped erase the disappointment of getting swept by the Yankees and seeing their lead cut to five games.

It was 2008 when Lester fully emerged going 16-6 and it included three standout starts against the Yankees along with a no-hitter against the Kansas City Royals, a few weeks before he dominated in the Bronx.

The first of those 2008 starts in the rivalry was July 3 when Lester five-hit the Yankees and enraged then first-year manager Joe Girardi. The second was in a Sunday night blowout after the Yankees won the first two games and that sent the Yankees into a tailspin that ensured they would miss the playoffs for the first time since 1993. The third was a no-decision because of a Jason Giambi game-ending hit but by the end of August, it was apparent Lester on the scene and a major figure in the rivalry.

Lester’s second full year was also the only time the Yankees won a World Series since 2000. He was a 15-game winner and pitched well against the Yankees, including the night of Aug. 9, 2009 when he pitched seven innings of one-run ball only to see the Yankees get back-to-back homers in the eighth to complete the four-game sweep to essentially secure the division.

Like 2006, 2010 was a year for the Red Sox to somewhat reset things but it also featured Lester winning 19 times, including a tense pitcher’s duel with Phil Hughes that took a while but was compelling.

In 2011, Lester was a 15-game winning, giving him 65 wins over his first four full seasons. It included two early wins over the Yankees, including his role in the three-game sweep in New York in early June. It later included a disastrous 2 2/3 inning outing when the Yankees shelled Lester for eight runs on Sept. 24, 2011 as part of their epic collapse of 20 losses in 27 games that ultimately led to Terry Francona’s exit and the forgettable one-year tenure of Bobby Valentine.

After the epic collapse which featured reports of Red Sox starting pitchers eating chicken and drinking beer during games, the Red Sox stumbled to their first 90-loss season since 1966, the year before their “Impossible Dream”, Lester was 14-game loser as the Yankees won another division title before being unable to hit in a four-game sweep by the Detroit Tigers in the ALCS.

In 2013, there was something special about the Red Sox and something off about the Yankees. Ultimately the distance was 12 games, and it seemed apparent when Lester got the opening day start and pitched five innings of two-run ball in an 8-2 win. That got the Red Sox off to a 12-4 start and his second win over the Yankees occurred in mid-Sept when he combined on a three-hitter and pitched eight innings.

Lester was approaching free agency in 2014 after playing a role on the third of four Boston titles since 2004 and was an All-Star. He picked up two more wins over the Yankees, including June 28, 2014 when he outdueled Masahiro Tanaka by pitching eight innings of one-run ball in a game decided by a Mike Napoli homer in the ninth.

After four more starts, Lester was off to Oakland and never returned to the rivalry after stalled contract negotiations. He authored a sterling second chapter with the Chicago Cubs by winning 19 games in the magical 2016 when they seemed destined to finally win it all even if there were some bumps along the way, including being forced to win three elimination games ahead of a classic Game 7.

Lester’s emergence was part of a new wave of young talent for the Red Sox to follow the legendary 2004 group. It was him along with Dustin Pedroia, Jonathan Papelbon and Kevin Youkilis who augmented David Ortiz as notable figures in the rivalry.