The Johnny Depp-Amber Heard defamation trial headed toward its conclusion on Friday as the dueling parties offered closing arguments after a seven-week trial that has gripped public attention and become something of a litmus test for the state of gender relations.

Seven of 11 impaneled jurors selected for the trial when it started in April spent a couple of hours beginning to deliberate a verdict after the conclusion of those closing arguments, but they won’t return a verdict for a few days at least. They were sent home Friday afternoon until Tuesday in advance of Monday’s Memorial Day holiday.

The legal team for Heard, the defendant in the case, told jurors to “think about the message that Mr Depp and his attorneys are sending to Amber and victims of domestic abuse”.

“If you didn’t take pictures, it didn’t happen,” said Benjamin Rottenborn. “If you didn’t seek medical attention, you weren’t injured.” Depp, he said, “cannot and will not take responsibility … it’s all somebody else’s fault.”

He told jurors that “if Amber was abused by Mr Depp even one time, then she wins … and we’re not just talking about physical abuse, psychological … sexual abuse”.

He directed them to consider text messages, previously shown to the court, showing “the most vile, disgusting language that you could ever imagine”.

“These words are a window into the heart and mind of America’s favourite pirate,” he said. “This is the real Johnny Depp.”

Earlier, Depp’s attorney Camille Vasquez told jurors Heard had “ruined his life by falsely telling the world she was a survivor of domestic abuse at the hands of Mr Depp.”

For her summation, Vasquez played audio recordings in which Heard admits to hitting Depp and calling him “a baby”.

“Take a minute to really think about what you heard there,” Vasquez asked the jury. “This is the real Ms Heard, the one on the audio recordings, not the one in this courtroom.”

Vasquez later said Heard was either “a victim of truly horrific abuse or she is a woman who is willing to say absolutely anything”. There was no recording of Depp admitting to hitting Heard, she said. “It doesn’t exist. It didn’t happen.”

Vasquez said Heard’s allegations of violence were “an act of profound cruelty” to “true survivors of domestic abuse”. She referred the jury to opening statements in the case. “She came into this courtroom ready to give the performance of her lifetime … and she gave it.”

Vazquez said that Depp’s texted apologies to his former wife – “for my behaviour, I’m a fucking savage” – had never been for violence toward her.

“What we have is a mountain of unproved allegations that are wild, over the top, and implausible,” Vasquez said. “And you can’t pick and choose which of these wild allegations to believe and which ones to disregard. You either believe all of it, or none of it.”

Picking up the narrative, another lawyer for Depp, Benjamin Chew, told jurors: “You have now come to know the real Amber Heard. Scary.” Depp, he said, had struggled with drugs and alcohol – “you never heard him deny that” – and “he owns his flaws. He told you all about them. But he is not a violent abuser.

“There is a world of difference between having a substance abuse problem and being an abuser,” Chew added. Heard’s lies, he said, had grown over time.

Chew added that Depp was a supporter of the #MeToo movement. “Nobody has come out of the woodwork to say ‘me too’ [about Depp]. This is a unique and singular ‘me too’ case, where there is not a single ‘me too’”.

Summations in the case came after Judge Penney Azcarate gave lengthy instructions to the jurors, directing them – by “greater weight of evidence” – to find for defamation with “actual malice”.

Each side was given 61 hours over the seven-week trial to present their case, with dozens of witnesses and experts weighing in on Depp and Heard’s 15-month marriage. Each was allotted two hours to summarize.

Though legal experts do not expect the case to provide any landmark of jurisprudence, it has for millions become an imperfect prism on the direction of the gender equality movement, and broadly gender relations, and whether, as Depp claimed in bringing the case, it was Heard who was the abuser in their relationship, not him.

For Heard, who has had the benefit of an unrelated London libel court judgment finding that it was “substantially true” Depp is a “wife-beater”, her side of the defamation case turns on whether statements that a Depp press agent gave to the Daily Mail alleging her claims of domestic violence were “an abuse hoax” orchestrated to take advantage of the #MeToo movement were libelous and intentionally false.

In her counter-claim, Heard has asked the court to award her $100m in damages.

If Depp prevails in his claim that he was defamed by Heard in a December 2018 opinion piece she wrote in the Washington Post describing herself as “a public figure representing domestic abuse” – despite never mentioning him by name – the 58-year-old actor could be awarded his claim for $50m. 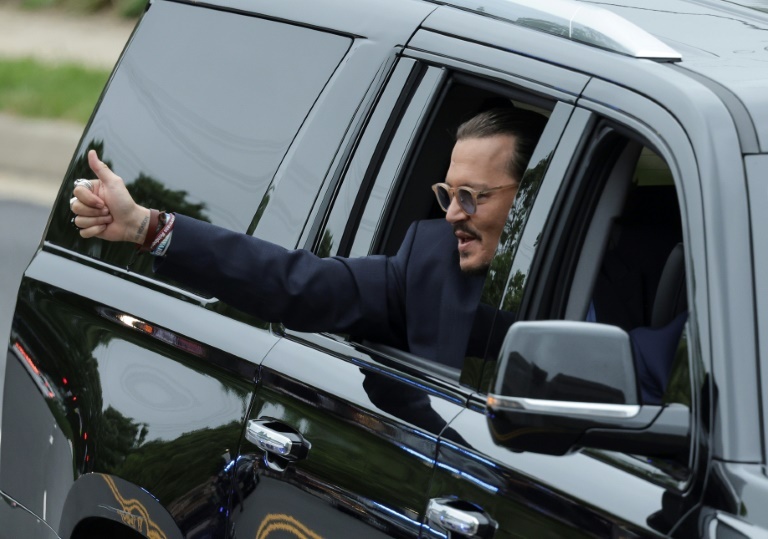 The seven-person civil jury began its deliberations at 3 p.m. Friday and finished for the day about two hours later.…

When the jury in Johnny Depp's libel suit against ex-wife Amber Heard resumes deliberations after the Memorial Day weekend, its…