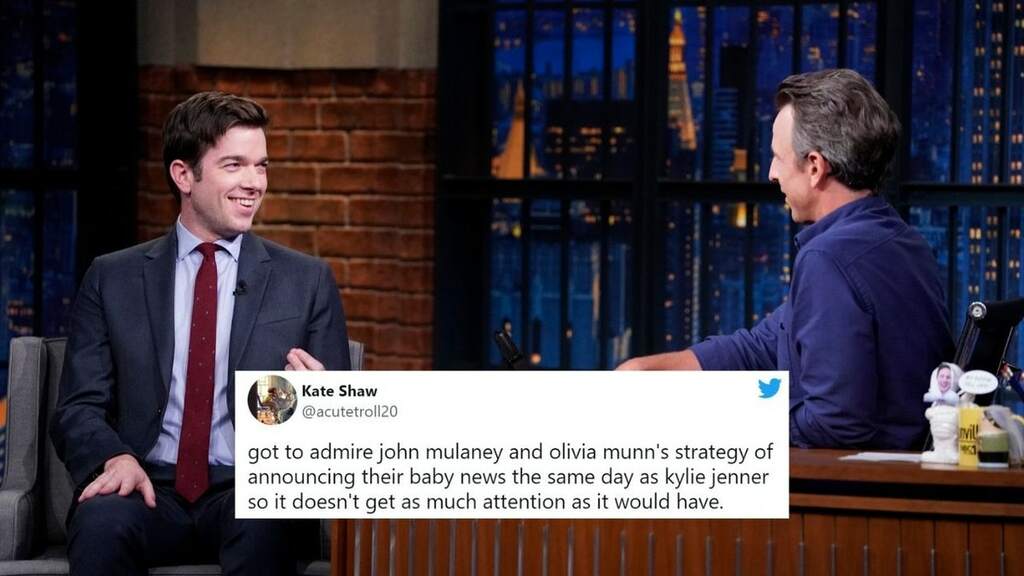 John Mulaney confirmed the rumours his girlfriend Olivia Munn is pregnant during an appearance on Late Night With Seth Meyers.

Speaking to the comedian and late-night show host about his time in rehab and his intervention, Mulaney slipped in that he’s having a baby with his new girlfriend, and went on to ask for tips on raising kids.

Towards the beginning of the interview, Mulaney spoke about how busy he’s been this year, and how excited he was to soon become a dad with his girlfriend Olivia Munn.

You can check it out right here.

“I packed a lot into this… Is it September now? I went to rehab in September, I got out in October, I moved out of my home from my ex-wife,” Mulaney said.

“Then in the spring I went to Los Angeles and met and started to date a wonderful woman named Olivia.

“I got into this relationship that’s been really beautiful with someone incredible… she’s kind of held my hand [through everything]. And we’re having a baby together. I was nervous when I was about to say the news!”

“I’m gonna be a dad… we’re both really really happy.”

got to admire john mulaney and olivia munn's strategy of announcing their baby news the same day as kylie jenner so it doesn't get as much attention as it would have.

Mulaney and his ex-wife Anna Marie Tendler confirmed that they were getting a divorce back in May, three months after Mulaney reportedly filed for separation while facing drug and alcohol problems.

Earlier this month, John Mulaney fans went into an absolute frenzy after The New York Post revealed an exclusive papped pic of Munn in baggy clothes and a possible baby bump. It’s truly the last thing anyone expected to come from this pairing, but the rumour sent the internet ablaze.

Folks were obviously ruined over the whole affair (literally), because a huge centre of Mulaney’s comedy is his relationship with his (now ex) wife, whom he seemed to love quite dearly.

Fans became unnaturally attached to their relationship via Mulaney’s comedy, and thus felt like they knew the comedian inside and out.

did it hurt? when you romanticised john mulaney based on three hours of netflix footage of him because you’re a dumbass and then he turned out to be an actual human being and you got offended? did it hurt?

Time to romanticise something else, dear friends. Maybe cleaning the house? The toxic parasocial dream we had is over.

The post John Mulaney Confirms That Olivia Munn Is Indeed Preggers So Bring On The DILF Phase appeared first on Pedestrian TV.