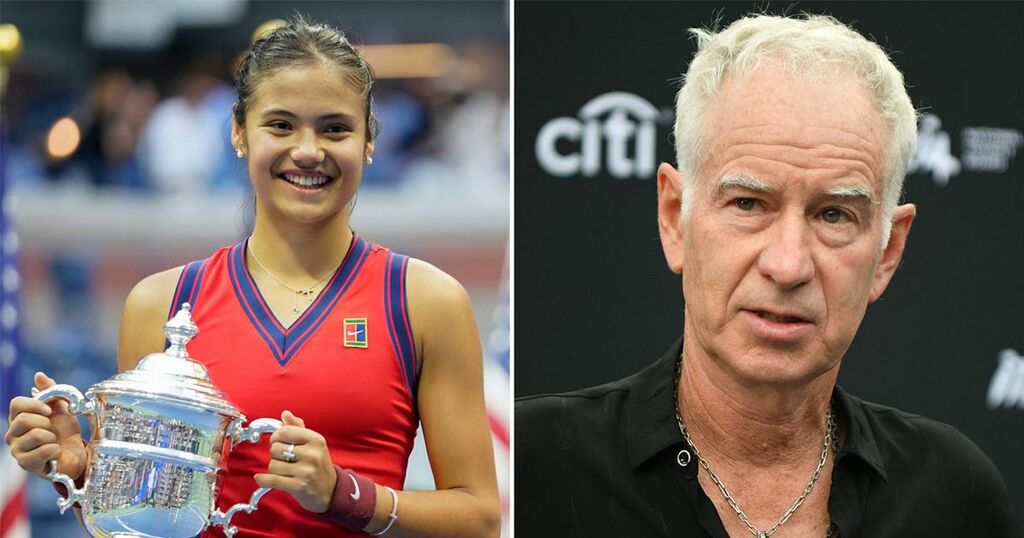 John McEnroe has stood by the comments he made about Emma Raducanu 's lack of resilience at Wimbledon this year.

The 18-year-old stunned the world last weekend when she beat Leylah Fernandez to win the US Open, becoming the first qualifier in history to capture a Grand Slam.

She did so without dropping a single set, and became the first British woman to win a Slam since Virginia Wade won Wimbledon in 1977.

READ MORE: Emma Raducanu tipped for £1bn fortune after being reunited with family

Her displays at Flushing Meadows were made even more remarkable by dint of the fact it was just her second major tournament, having reached the last 16 at SW19 this summer.

However, the wildcard entry withdrew from her match with Ajla Tomljanovic, citing dizziness and breathing problems, and was accused of not handling the pressure by BBC commentator McEnroe, 62.

"I feel bad for Emma, I mean obviously it got - it appears it got a bit too much, as is understandable, particularly what we've been talking about for the last six weeks," he said, live on air.

"How much can players handle?

HAVE YOUR SAY : What do you think about McEnroe's comments? Let us know in the comments section.

"It makes you look at the guys that have been around and the girls for so long, how well they can handle it.

"These guys that can keep their composure and the girls out there are absolutely amazing - so we have to appreciate the players that are able to do it so well and hopefully she will learn from this experience."

Learn she certainly did, and although McEnroe has doubled down on his Wimbledon comments, he also acknowledged her "incredible" US Open success.

"I meant exactly what I said. I tried to relate it in a small way to my experience when I first went to Wimbledon also at 18," he told CNN.

"I mean that was to me as vanilla as it comes. I was very supportive of her, I thought, at the time."

As for Raducanu's displays in New York, he said: "I don’t think you could possibly do it any better than she did at the US Open. Are you kidding me? That’s insane.

"And that she’s been able to do this now there’s going to be obviously a lot more focus on it. It’s incredible."

Speaking to Good Morning America on Monday, Raducanu put her Wimbledon withdrawal down to a "physical issue," not a lack of mental strength, and admitted she still had work to do to develop her endurance.