John Kerry to visit India next week for climate talks 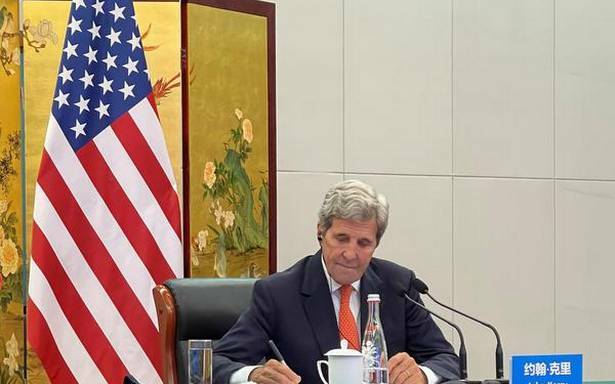 As a prelude to the 26th Conference of Parties (COP26) meeting on climate change in Glasgow in November, U.S. Special Presidential Envoy for Climate, John Kerry, will visit India next week to meet officials and private sector representatives, the State Department announced.

Countries are expected to go beyond their commitments made in Paris in 2015 and set new goals in time for the Glasgow conference. Post Paris, India committed to installing 450 GW of renewable energy capacity by 2030 and the Railways has committed to achieving net zero emissions by 2030.

Mr. Kerry will be in India September 12-14 “to engage with international counterparts on efforts to address the climate crisis” and “ to discuss efforts to raise global climate ambition and speed India’s clean energy transition,” the State Department said.

Mr. Kerry’s visit “will bolster the United States’ bilateral and multilateral climate efforts” ahead of COP26, the State Department said. On his last visit to India, in April, he had said the U.S. was interested in ‘facilitating’ India achieve its 450-GW goal.

The Biden administration brought the U.S. back into the Paris Climate Accord, which the country had exited during the Donald Trump presidency. Mr. Biden’s infrastructure proposals include allocations for increasing green technology — such as electrical vehicles, electrical power lines to facilitate renewable energy delivery and so forth.