Jim Furyk nervous, but excited, to host Furyk and Friends for the first time as a full Champions event 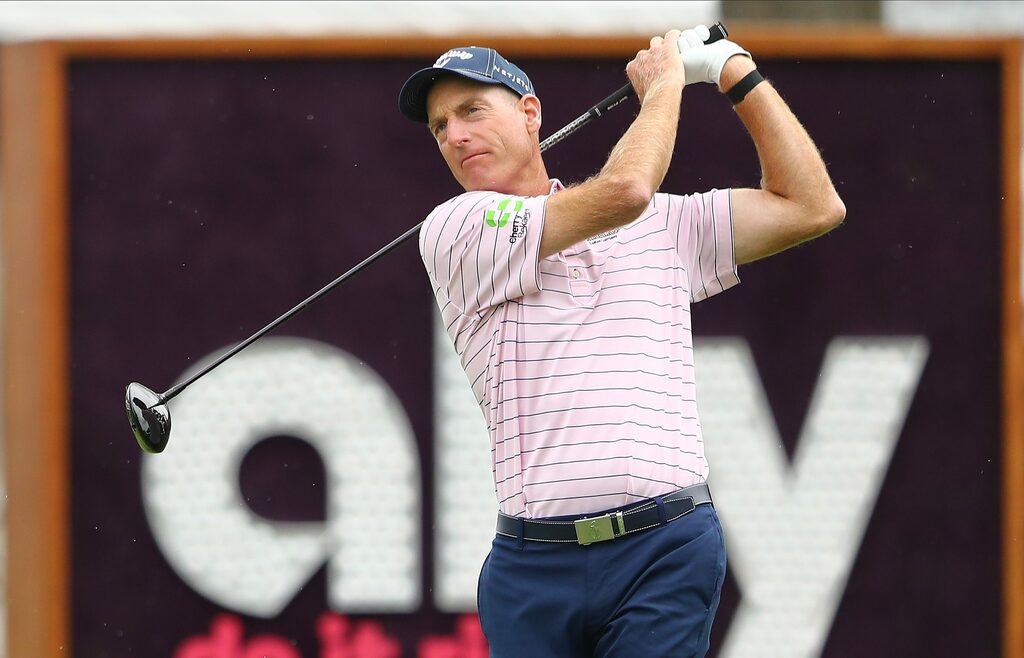 JACKSONVILLE, Fla. – When Jim Furyk was a young pup on the PGA Tour, he marveled at the likes of Jack Nicklaus, Gary Player, Lee Trevino and Chi Chi Rodriguez starring on the senior circuit. But he never envisioned that some day he’d be playing on PGA Tour Champions.

The 51-year-old has made a seamless transition to 50-and-older golf, winning in his first two starts and vying for both Rookie of the Year and the Charles Schwab Cup, the season-long competition. He hasn’t played a PGA Tour event since May, and noted that he may play a couple of old favorites over the next few years, but “95 percent of his golf will be on the Champions Tour.”

Furyk may have gotten off to a quick start in finding the winner’s circle, but he said it’s no cake walk. These guys are still good, and they still work at their game.

“There’s this idea that we’re all sitting around in the locker room and we’re having a beer and a glass of wine,” Furyk said. “I went to my first event in Flint and the range was packed on Tuesday, Wednesday and Thursday. I mean packed. Putting green, it was hard to get a spot or a hole to putt at. The chipping green, they’ve got those three little chipping greens at Warwick Hills and it was hard to find a spot to go.”

“We’re blessed, and the guys understand it,” Furyk added. “They understand that it’s a second lease on life and I’m not sure there’s any other sport, maybe bowling, we have some professional bowlers over 50 that can still compete.”

“I’ve kind of fallen in love with the tour,” Furyk said. “I didn’t know if I’d like the three-round events; it’s a little bit of a track meet. You better get out there quick and make some birdies. You have to put the pedal down. I’m getting aggressive, I’m making more birdies. Golf is more fun that way.

“I’ve enjoyed getting in the fire a little bit more and winning a few events and had some heartbreaking losses as well. Every competitor wants to wake up on Sunday with a chance and I’ve had more opportunities on the Champions Tour and really enjoyed them. Guys are just as nervous and you get that throw up on your shoes on 18.”

This week Furyk may have a queasy stomach for a different reason. His name is on the tournament marquee for the first time – the Constellation Furyk & Friends – is being played at Timuquana Country Club.

“Monday morning was like maybe a feel of a major championship where I was just so excited to get things going, but also felt nervous, right?” Furyk said.

For a decade, Furyk & Friends existed as a one-day pro-am ahead of the Players Championship, raising about $500,000 each year for charity. Darius Rucker played at the inaugural tournament party.

“We had a nice niche and we were raising some good money, but we also didn’t have a formula for growth,” Furyk said.

As he neared his 50th birthday, he started seeing friends Davis Love III (RSM Classic) and Steve Stricker (American Family Insurance Open) host tournaments in their local community. When the Korn Ferry Finals moved from Atlantic Beach, Florida to Indiana, Furyk recognized an opportunity to create a tournament that would highlight downtown Jacksonville and the St. Johns River.

With the buy-in from PGA Tour Commissioner Jay Monahan, Furyk landed his long-time sponsor Constellation Energy to underwrite the title and Circle K as a presenting sponsor. (There’s a Slushie machine in the locker room this week.)

“At the time I hadn’t played a Champions Tour event yet. We’re trying to build an event on a tour that I never played an event on,” Furyk said. “It’s been over three years in the making, so it felt like this day or this week would never get here, and then the last few months have kind of flown by.”

Turns out Furyk has a lot of friends. The field boasts the likes of Phil Mickelson, Fred Couples, winning U.S. Ryder Cup captain Steve Stricker and losing European captain Padraig Harrington, who is making his senior tour debut. Furyk, who said he didn’t need to twist any arms to get commitments, relayed a funny story of his recruitment of Stricker. Furyk was paired with the tournament host in Wisconsin and Fred Couples in the first round.

“Freddie hopped up on the first tee and said, ‘Man, I love that you two have an event. Strick, happy to be here. Jimmy, I can’t wait to come to your event.’ Then he looked at Strick and went, ‘You’re going, right?’ It was awesome. I couldn’t have said it better. I said to Strick, ‘Hunting season isn’t until Thanksgiving in Wisconsin, I checked.’ He laughed and said he’ll be here.”

Rucker was there on Tuesday night to bring everything full circle as the talent at the pro-am party along with Scotty McCreery, a former American Idol winner, and even John Daly took to the stage to sing “Knockin’ on Heaven’s Door.”