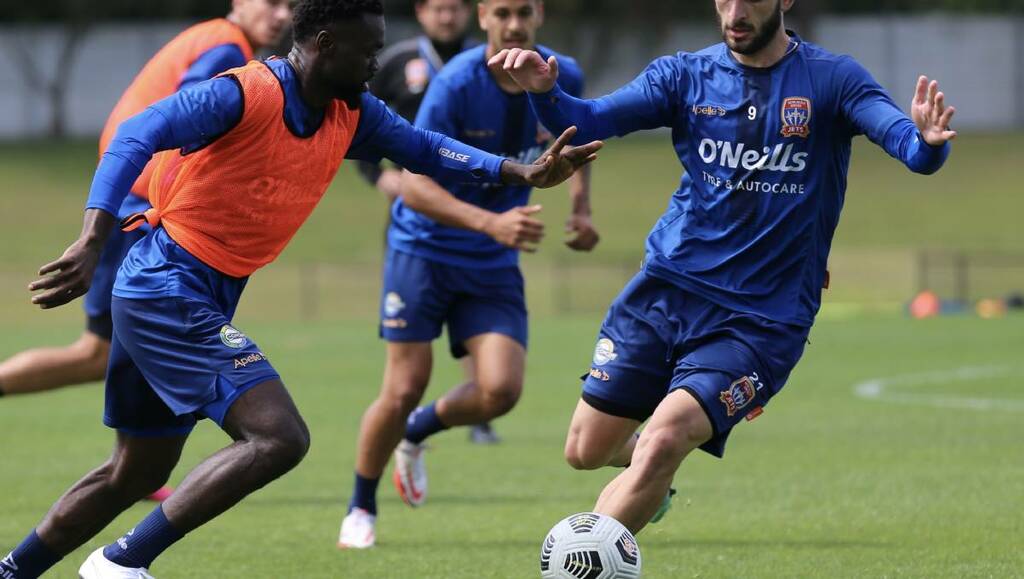 JETS coach Arthur Papas made sure Savvas Siatravanis knew exactly what he was in for when the Greek winger arrived for his first training session this week.

"We put a lot of work into them before they come out of quarantine with videos and presentations," Papas said. "Savvas had been watching all the training sessions. They have an idea before they come here of wait we are expecting. Then, of course, the main thing is getting them on the field, working with them and helping them to integrate."

It will be the same for Brazilain playmaker Daniel Penha, who completes his mandatory 14-day quarantine on Saturday.

He pored over videos, studied data, leaned on contacts for an insight on the players' characters and spoke at length to the individuals.

But until the player steps foot on the training pitch, there is an element of the unknown.

"Quite a bit of work has gone into the scouting of the players who have come in," Papas said. "They all bring something different. So far they have come in and had a positive influence on the change room.

"There is still a long way to go. They are just like everyone else. They are competing for a spot in the team."

Siatravanis will be eased through his first week.

"You cant just throw them straight in," Papas said. "You have to be careful because of how restrictive quarantine is in terms of movement. All of a sudden, if you go from not being allowed out of a room which is 10 by 10 and you start sprinting, you will put yourself in a risk category."

Boumal and Mikeltadze have been on the ground for over a fortnight.

"They have quite a few different tools," Papas said. "Beka likes to receive the ball [at feet] because technically he is competent with both feet. By the same token, he is always running off shoulders towards goal as well.

"Ollie is an explosive player and likes to take on defenders.

"They have a certain physical profile that is important with the type of tempo we want to play at. They have come here focused. They are not here for a holiday.

"Overall, they were the things we scouted for and were important for us. They have those qualities. Now it's about how consistently you are able to do them."

In the absence of friendlies due to COVID-19 restrictions, the Jets have played a series of internal games.

"Every four days we have a full-blown match against each other," the coach said. "In a 70-minute match we played, we accumulated 90-plus minute totals in terms oft the physical metrics- sprints, high intensity runs, distances."

"That means the intensity is really high. That is credit to the players. They are motivated, they are working hard, competing against each other and trying to lift the level."

Papas hopes to get the green light to play trials against A-League opposition from October 25 and has pencilled in three games before the season opener against Central Coast on November 21.

"It is important that the players play against someone other than themselves," he said. "The A-league probably has the longest pre-season in the world. Now you get a situation where you look at the same faces every day and no-one else.

"We are still possible three weeks away from playing a match. We have marked games on a calendar but it has an element of uncertainty.

"It will be governed by FFA Cup, which we still have no information about.

"I don't think we will have the amount of matches we would ideally like to play. We will just make the best of it."