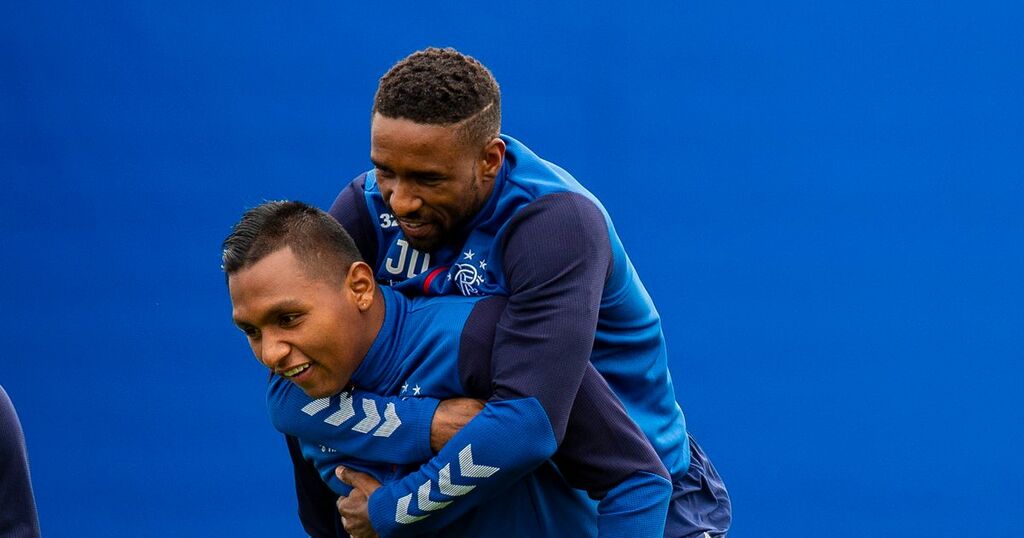 The profits from Jermain Defoe’s Scottish swan song can be counted in goals and precious silverware.

But Steve Lomas reckons the real riches from his old West Ham team-mate’s time with Rangers will only be banked once Alfredo Morelos moves on.

The veteran was brought in to provide competition for the Colombian at a time when Steven Gerrard was losing patience with his hot-head striker.

But over Defoe’s three-year stint in Glasgow, that rivalry blossomed into a close friendship as the veteran poacher grew to become a mentor that the younger firebrand frontman could trust.

And ex-St Johnstone boss Lomas reckons the good habits Morelos has picked up off his pal are once again coming to the fore.

Slimmed-down and back on form, the Ibrox ace was yesterday named December’s player of the month award after a run of six goals in his last eight run-outs.

And if that eventually leads to a fat cheque dropping into the Ibrox coffers, Lomas knows exactly who the Rangers board should be thanking.

The Northern Irishman told Record Sport : “It can only be good for a young guy like Morelos to have worked so closely with Jermain and seen how he conducts himself.

“It’s been a long time since I shared a dressing room with the wee man but I still remember just how good a trainer he was.

“That can only be invaluable.

“Morelos is 25 now and the best thing he could do to extend his career is to look at what Jermain’s doing that keeps him playing at 39.

“We’ve seen over the last few weeks that Morelos seems to have knuckled down a wee bit and got himself into better shape and maybe that’s behind his return to form.

“It’s OK him being a big fish up in Scotland but if he wants to go to the next level and reach a stage like the Premier League then he needs to keep himself in top shape and there’s no-one better to take inspiration from on that front than Jermain.

“I’m pretty sure there will be Premier League managers getting in touch with Jermain to ask about Morelos."

Gers secured the services of a proven penalty box expert when the Premier League legend followed his former England skipper Steven Gerrard to Glasgow in January 2019.

Ibrox was no retirement home, however, as the 39-year-old ex-Spurs, Portsmouth and Sunderland ace proved he’d lost none of his killer instincts by netting on average a goal every 99 minutes during his three year spell.

The move proved to be just as rewarding for Defoe, who was at last able to get his hands on the one thing missing from his glittering list of accomplishments - a winners’ medal.

A parting of the ways has been on the cards for sometime, though, with Defoe spending longer on the pundits’ sofa than he has the Ibrox bench this season.

But the part he played in last year’s title triumph will ensure he is always welcomed back at Ibrox with open arms.

“First and foremost Jermain will be remembered as a guy who joined the club at a crucial point in their rebuild and played a crucial part in stopping Celtic from reaching that magic number of 10,” said Lomas, who was still an Upton Park regular when Defore made his Hammers breakthrough aged 18.

“You only have to look at Jermain’s stats - 32 goals in 74 appearances and the vast majority of these appearances I’d imagine were off the bench.

“So there’s no denying he’s made a telling contribution.

“Stevie Gerrard used him very wisely during his time at the club and you can’t argue with that. To score almost a goal every two games is still a phenomenal strike rate.

“Getting that first ever medal was great reward for him.

“He won’t have realised the size of the Old Firm before he arrived but he’ll know now.

“He’s been hero-worshipped these past three years and his place in the club’s history is secure after stopping Celtic reaching that record.

“It was just reward for a special player that he got to finish his career off at such a fantastic club like Rangers.

“It’s been great for both parties.”

Defoe was handed a player/coaching role by Gerrard in the summer but since Gio van Bronckhorst’s appointment he’s managed just one minute of action.

Instead, his focus has shifted to his regular punditry slots with Sky but Lomas reckons he’s still got plenty to give on the pitch.

“Jermain’s always had that natural instinct as a striker and he’s never lost it.

“He always reminded me of Ian Wright. No back-lift yet he’d get a shot away so quickly. It was always a nightmare for defenders trying to get set and block.

“The only mistake I think he’s made in his career is going to America too early because he soon realised he still had plenty left in the tank to do well here in Britain.

“And you know what, it wouldn’t surprise me if he played on if he can find something that stimulates him.

“There’s no two ways about it, he will probably be frustrated that he’s only played two games this season.

“He’s got that arrogance, in a good way. He will still believe if he got the same game time as Morelos, he’d outscore him.

“The kid just loves football. The only question for his future is if he can find something that tickles his fancy.

“If you’re an English Championship club needing goals surely you’d give it a thought?

“Maybe do St Johnstone a wee favour and get the team up there out of trouble.

“Finances unfortunately might be a problem but if Callum Davidson could get someone like Jermain up to Perth, for me it would guarantee St Johnstone’s survival. I’d certainly back him to get seven or eight before the season’s out.”