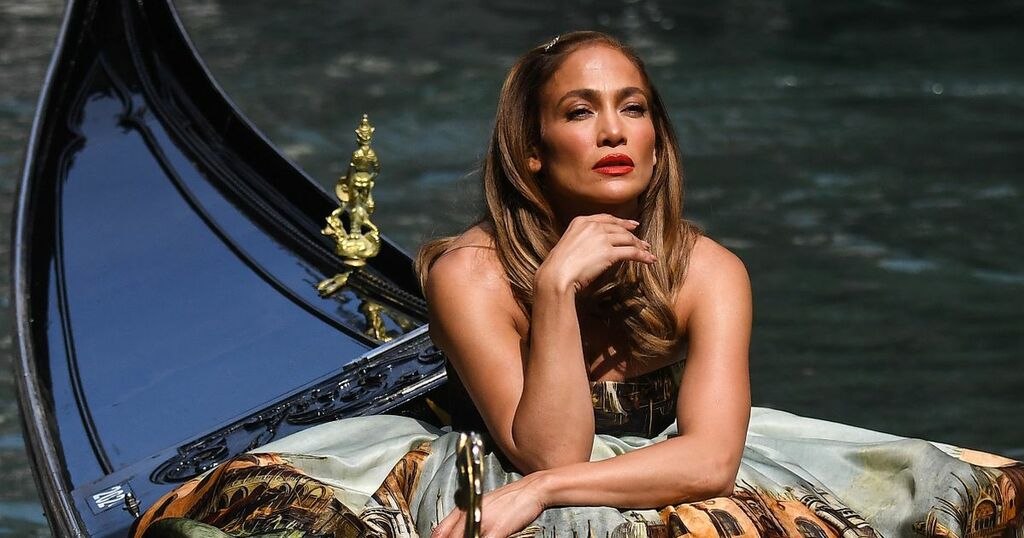 Another day, another stunning look for Jennifer Lopez, who dazzled photographers and onlookers in Venice.

She posed in a traditional gondola on the canals, wearing a printed, strapless ballgown from Italian designers Dolce & Gabbana.

The singer and actress, who looks 20 years younger than her actual age, 52, was in the city nicknamed 'La Serenissima," meaning "The Most Serene One", for its annual Film Festival.

The On The Floor star was all alone and didn't seem to mind as she was the centre of attention in the exquisite dress from the luxury fashion house.

It had a tight bodice which drew in at the waist, before billowing out into a full skirt, which was printed with what looked like a watercolour painting of Venice's canalside and buildings.

Jen's make-up and hair were also glamorous, with her long brunette hair accessorised with beaded hair pins, and a slick of red lipstick.

Yesterday she and her boyfriend Ben Affleck, 49, had drawn the crowds as they attended the red carpet premiere of the movie The Last Duel.

She wore a white floor length close-fitting dress, slashed at the cleavage with a fishtail skirt, while he playing it safe in a dark tuxedo and black tie.

The couple delighted fans by appearing very affectionate with each other, sparking speculation that once again, Ben is going to propose to the woman he was engaged to during the early 2000s.

Back then, he popped the question with a Harry Winston ring now worth around £8 million. Does this reunion 18 years after they split up, mean Bennifer – as they were nicknamed then – are back?

According to insiders, the relationship isn't a showmance and the couple are serious about each other. But they may not make it down the aisle any time soon.

A source told E! : " They are fully committed to each other. They have been meshing their lives and families and don't feel the need to get engaged yet or even tie the knot."

Referencing their previous relationships, the insider continued: "They have both been there and don't feel it's necessary.

"They are both very secure within their relationship and Ben worships her. It's truly meant to be and everyone around them thinks they are a perfect match.'

The Hollywood A listers rekindled their romance this year after she split with her boyfriend Alex Rodriquez in April. Ben has been divorced from his ex Jennifer Garner since 2015.

He has three children – Violet, 15, Seraphina, 12, and Samuel, nine, from his marriage, while she is mum to 13-year-old twins Emme and Max with her ex Marc Anthony.

The insider added: "Their friends wouldn't be surprised if they move in together and ultimately end up together. They're spending all of their free time together and making each other a priority."

And Ben's former lover, Oscar-winning actress Gywneth Paltrow, appeared to give the relationship her blessing, commenting on pictures of the couple kissing, by writing, "Okay, this is cute."

Today is the final day of the annual Film Festival and fans of Bennifer 2.0 are hoping to get a final glimpse of the couple before the event ends.