Jen Psaki: Not quite a love story

Jen Psaki spent her last Wednesday afternoon as Joe Biden's first press secretary much as she spent the last 16 months — working from the computer in her West Wing office while taking calls, handling staff and dealing with the press.

Surrounding her in the office, in most un-Psaki-like fashion, were half-filled boxes of personal belongings she's packing away as she prepares to leave the White House. It seemed a bit incongruous, the buttoned-down Psaki in an office that looked like chaos.

Of course, that's been the hallmark of her time as press secretary.

RELATED: Aloof, silent and disengaged: Why the Biden White House is in crisis

That was a lot of crazy to put to bed quickly when Biden walked into the White House for the first time. Ultimately, much of the responsibility for that definitive and much-needed change fell on Psaki's shoulders. When Biden took office he pledged to change the national tune. But he doesn't yearn for the cameras the way Trump does, so the American people have often relied on Psaki to make good on the president's promises. She has been the leading voice of the administration for 16 months.

She took the job with an apparent resolve to be polite, indulgent and professional, to speak in the president's best interest and to do it with a smile while maintaining a marriage and a family. (She has two children.) In a town of energetic professionals, she was the long-distant sprinter.

Lying? Well, you could call it that. Public relations always includes a fair amount of spin. Psaki did it well on occasion, and not so well on other occasions. Her fans are as rabid as her haters and there is no reasoning with the extremes.

For the most part, Psaki took over the briefing room and doused it with a sedative. Gone were the days of screaming at reporters, or openly fighting with them. Her staff refers to the press as "friends," and Psaki has mastered the art of handling opposition. Her briefings lack the emotion of a Trump briefing, and that's by design. Some reporters call her approach "boring" and reminiscent of the Obama years, when the press corps endured tedious briefings by Josh Earnest that lasted 90 minutes or more and featured multiple references to his favorite sports teams.

Psaki took over the briefing room and doused it with sedatives: No more screaming at reporters or openly feuding with them. For some in the press corps, that was too "boring."

Psaki has also been criticized for failing to work her way around the room to more reporters during her briefings. Her staff's ability to return emails and phone calls has been called "lackluster" or "nonexistent." But she is personally well-liked among the press corps — so much so that reporters have overlooked slights they wouldn't or didn't from previous press secretaries.

For those who have been around for a while, she has been compared to Mike McCurry, the  Clinton press secretary who is most often cited as the best of the last 40 years.

Many in the press recognize that some of the communications problems inside the White House are outside Psaki's ability to control, and give her a pass for that. But there's no question she is at least complicit in one of the administration's biggest problems: lack of access to the president.

In the early days of the administration she told me that she believed limiting Biden's access to the press was beneficial to him. "I think he interacts too often," she said.

But as I sat and spoke with her Wednesday, she praised Biden's work in front of crowds. I again told her that one of the biggest problems I had with the administration was that it hasn't put Biden in front of people more often. "He's better than you all are," I told her. She agreed.

Then she asked for a point of clarification. When I said that Biden should be in front of people, Psaki wanted to know if I meant reporters in a press conference. He's only done one of those in 16 months, and that was before a carefully curated group. So, yes: Yes, I wanted to see Biden in front of reporters, where he could take questions and answer them on the fly.

Politicians seem to believe that merely standing up for a speech or appearing at a town-hall event is good enough to count as being "in front of the people." But in reality, it is how many times a president answers questions from disinterested, third-party observers that offers the best metric to determine not just the quantity, but the quality of his (or her, someday) interaction with the public.

How often does the president face questions about his policies or other matters of public interest?

For that, you need reporters. Presidents often like to differentiate between the American public and reporters. Trump called us the "enemy of the people" — but the truth is we're just people who ask questions for a variety of reasons. Biden and Psaki are not nearly as horrific as Trump and his preschool-quality press secretaries in terms of dealing with the press — but then again, if Trump had put one of those circus bears that rides tricycles and toots a horn in the Brady Briefing Room to answer our questions, that would have been a marked improvement.

How often a president takes real questions from disinterested, third-party observers may offer the best metric of his (or, someday, her) interaction with the public.

But the Biden administration has trouble with us too — even if Psaki and others downplay it — and we've had issues with the Biden administration, albeit far more normal ones than those the press faced during the Trump years. In many ways, Psaki and Biden remind me of the Reagan administration, circa 1986 — the first one I covered. But they also remind me of the Clinton years, both Bush administrations and Obama. They remind me of every president I've covered, in fact — except the previous one. Psaki lowered the temperature and improved the atmosphere immensely in the West Wing. Anyone who would argue otherwise is either suffering from the effects of a near-fatal dose of illegal hallucinogens, needs to be escorted to a rubber room, or should sign up to run for Senate as a Republican. You're their kind of crazy. Hell, pull a hat trick and do all three.

Psaki's calming performance was seen by some in the press as refreshing, by some as condescending and by others as the act of a softer, gentler liar. She didn't lose her cool, though I know that on a few occasions she either avoided my questions or fumbled them. She was also criticized for being circumspect in her answers and for obfuscating the facts.

I have criticized this administration, and by extension Psaki, for being too slow to reopen the Brady Briefing Room, the East Room, the South Lawn and the Rose Garden for everyone in the press corps, as had been the norm prior to the pandemic. I've criticized them for too few press conferences and for other problems I've already mentioned.

COVID gave Trump cover at the end of his term.  He faced a diminishing number of reporters, as we tried to follow federal guidelines to help people stay safe from a fatal viral infection. Biden and Psaki faced that same situation in the first year of this administration — and Biden did a far better job of controlling media access than Trump ever did.

COVID gave Trump an excuse to face a diminishing number of reporters — but Biden has controlled media access far more than Trump ever did.

Of course it's true that the administration tries to control the press. All administrations do. But some of the criticism of Jen Psaki should be aimed at reporters. After the Trump fiasco, the press corps was spent. A changeover occurred and many new reporters joined the ranks, alongside a smaller number of veterans. Psaki isn't to blame for the quality of questions she has fielded, or even for taking advantage of younger reporters' naiveté or their all-consuming desire for access. She can't be criticized for trying to put the president's best foot forward. That's her job.

If you want to criticize Psaki for anything, is it for being so blatantly normal as to be boring? I heard one reporter say of her that her relentless smile was "mind-numbing. " Some call her elitist. Some say she's disingenuous.

She's earned criticism, even if some of it has been unjust. She's dealt with it. I'm not fond of some of the answers I've been given, but I'm a big boy. I got notice just this week that the suit I filed against Donald Trump to keep my press pass was turned into a permanent injunction, thus solidifying and enhancing a reporter's First Amendment right to cover the president. It's up to us to take advantage of that. No press secretary can help us if we don't help ourselves.

As for Jen Psaki, here's what she cannot be criticized for: How she has conducted herself. It has been, for the lack of a better term, "adult-like." She's been the best since McCurry — but not as good as him. For those of us who survived four years of death threats, belittlement, anger, resentment, lies, damn lies and stupid statistics, this has been a walk in a D.C. park — with only occasional poodle bombs to dodge.

But the thing is, that wasn't quite enough.

Read more from Brian Karem on the struggles of the Biden White House: 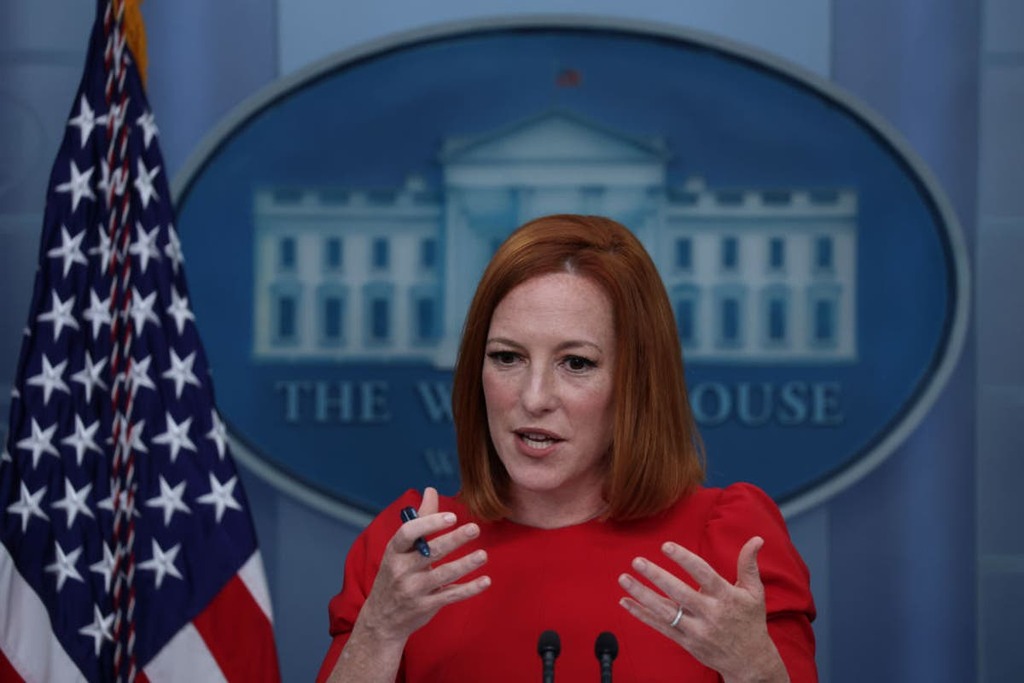