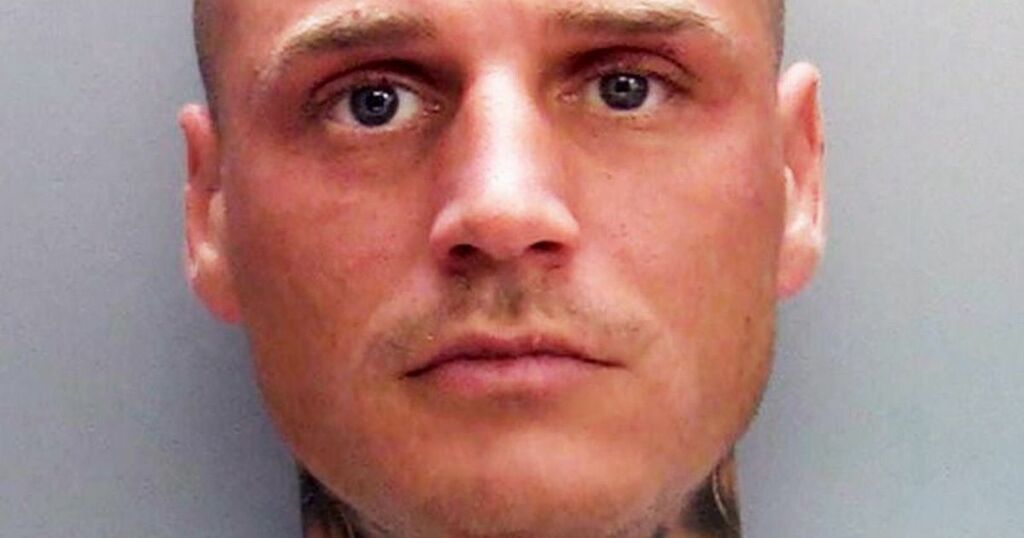 A woman was terrified after her jealous partner hit and tried to strangle her as part of a drug-fuelled attack.

Joe Parkinson, formerly known as Joe Dryden, admitted to a series of offences during a horrifying campaign of stalking and threats.

He pleaded guilty to battery and damaging a mobile phone, as well as killing a koi fish that was in the victim's garden pond using bleach, as reported by Leicestershire Live.

Parkinson, aged 30, also admitted to a theft of the victim's £300 hot tub, that was later returned, and stalking her between April and June 2020.

Prosecutor, Lynsey Knott, told Leicester Crown Court that the couple's 10-month relationship started to go downhill by April 1 last year, when he returned to the victim's home in Rothley, where he was then staying, at 11.30pm.

Parkinson was behaving "differently" and the complainant suspected he had been taking drugs.

At 2am she was awoken by a blow to the head and the defendant yelling, accusing her of texting her ex-boyfriend.

He then threw her phone out of the bedroom window.

The prosecutor said: "He pushed her onto the sofa and threatened to punch her before strangling her with both hands for 10 to 15 seconds, until she struggled to breathe, before releasing his grip and pushing her to the floor."

He ran out of the house, taking her handbag - which he emptied in the street - before driving off.

She suffered a bruised knee, but no other injuries, although she was shaken up.

When he saw her the next day, as she visited his sister who lived nearby, he demanded the victim should apologise to him.

When she refused, he threw her mobile phone over a garden fence, causing £200 damage to the handset.

As she went to retrieve her phone he stole her hot tub from her garden shed, that was later returned via a third party.

That evening, he rang her threatening to smash his car into her house and kill her and claimed he had "nothing to lose," resulting in her calling the police.

Parkinson, of no fixed address, was arrested and released on police bail, on April 4, with conditions not to contact the victim or go within 100 metres of her home - which he ignored from the outset, the court heard.

Miss Knott said: "He began stalking her by emailing, phoning, driving past her home and phoning her workplace."

He put personal photographs of her on social media and sent her a photo of her ex-boyfriend's home, "indicating an intention to assault him".

He sent 100 emails, over several weeks, trying to persuade her to resume the relationship and made calls asking her to drop the complaint against him.

On June 3, the defendant made three bank transfer sums of paltry amounts, totalling 39 pence, with accompanying messages of "Why you do this," "My head is gone" and "Am dead now."

He also told her, in conversation, that "A man with nothing to lose is a dangerous man" and made a reference to "Going out with a bang."

On June 7 she fled home to stay with a friend and he informed her that he knew she was not at home.

Parkinson was arrested two days later and remanded into custody.

In a personal impact statement, the victim referred to Parkinson as Joe Dryden, describing him as "controlling and overbearing."

She said the offending caused her "fear and distress" but there was a "huge improvement" in her wellbeing since his remand into custody - and she wants no further contact.

Sentencing, Recorder Steven Gastowicz QC said: "You got yourself more and more wound up in jealousy.

"This was a serious course of stalking and harassment.

"It included putting bleach into her pond, killing her koi carp, which was discovered by her 12-year-old daughter.

"Your conduct was intended to maximise fear and distress and the poisoning of the fish is an example of that."

The recorder said he took into account the defendant's mental health problems and the fact he had sought help.

Jonathan Dee, mitigating, said: "It's not all one-sided and there was a degree of mutual contact after his release on police bail.

"The emails included offers to pay for the damaged phone."

Mr Dee said Parkinson's mental health worsened following the loss of his job because of the pandemic and during lockdown.

He now had the offer of new employment and planned to start afresh, by relocating to Derby on his release.

Parkinson was jailed for two years and seven months.

He was placed on a six year restraining order, banning any contact with the victim, including not visiting the road where she lives for three years.