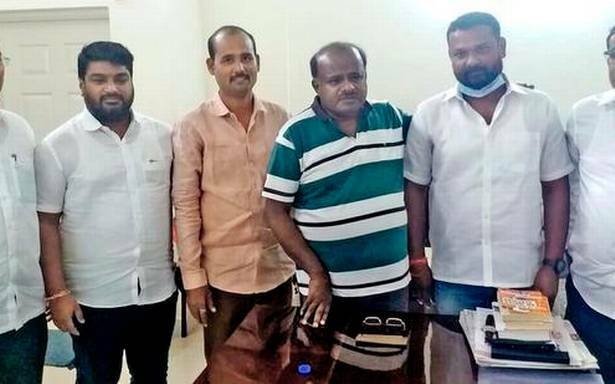 The Janata Dal (Secular) continued to keep the Bharatiya Janata Party (BJP) and the Congress guessing on which side it would lean in the Kalaburagi City Corporation (KCC), with a final decision likely to emerge on Monday evening after the JD(S) legislature party meeting.

Both the Congress and the BJP need the support of the JD(S), which has won only four seats in the 55-member corporation council, to capture power.

“Mr. Kumaraswamy said he was open to an alliance, but a final decision will be conveyed to the Chief Minister on Monday or Tuesday following JD(S)LP meeting on Monday evening,” Mr. Ashok said, after the meeting at Mr. Kumaraswamy’s farm house. He added that he was very hopeful of an alliance. In a series of tweets, Mr. Kumaraswamy confirmed the meetings he had held with Mr. Ashok, along with MLA Sa.Ra. Mahesh. Sources claimed that alliance of the JD(S) with the saffron party was “almost final”.

However, speaking in Mangaluru, Mr. Kharge exuded confidence in getting the support of four JD(S) councillors and one Independent councillor. “I have met Mr. Deve Gowda in this regard and I am confident of the rule by secular parties,” he added.

KPCC president D.K. Shivakumar in Bengaluru also said the Congress had intentions to go with the JD(S) in the corporation, which has thrown up a fractured mandate in the recently held elections.

After a meeting with Congress MLA Priyank Kharge, Mr. Shivakumar said the Congress was keen to get the support of the JD(S) to keep the BJP out of power in the corporation.

Mr. Priyank Kharge alleged that the government had been delaying the notification to hold elections to the posts of Mayor and Deputy Mayor in Kalaburagi, with an intention to secure power from the backdoor.