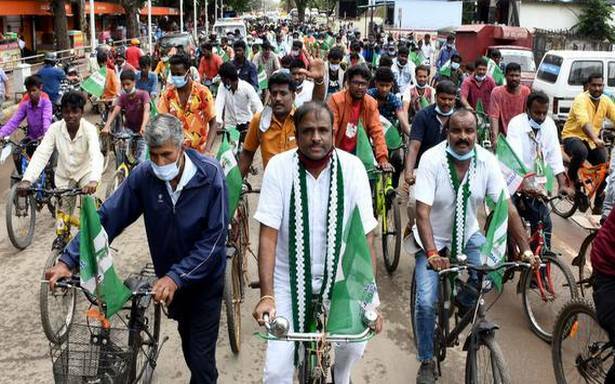 The Hassan taluk unit of Janata Dal (Secular) staged a protest condemning the rise in prices of essential commodities, including petrol and diesel, in Hassan on Wednesday. Hundreds of party workers rode bicycles on the main roads as part of the protest.

The cycle jatha began at APMC Yard on B.M.Road and concluded at the Deputy Commissioner’s office, where they raised slogans against the BJP government at the Centre and the State. The protesters said that common people had been suffering because of the steep increase in the price of petrol, diesel, LPG and other commodities. “The Narendra Modi-led government had failed to bring down prices. The LPG prices had been going up regularly. The people had been forced to pay higher taxes, though the price of fuel had been low in the international market. The fuel prices had impacted the price of other essential commodities as well. Both the salaried class and those in the unorganised sector had been hit hard,” the protesters said.

They submitted a memorandum at the Deputy Commissioner’s office. Party’s Hassan taluk president S. Dyave Gowda, Agile Yogish and others led the protest.