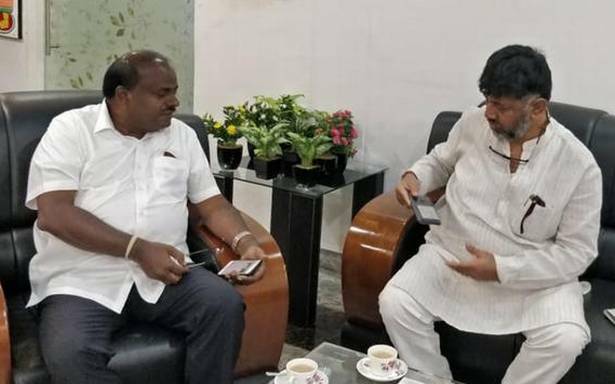 By demanding the coveted post of Mayor despite winning only four seats in the 55-member Kalaburagi City Corporation council, the Janata Dal (Secular) appears to be resorting to an all-too-familiar strategy it has mastered: of milking the most of limited political presence amid the rivalry between the two national parties — the Congress and the BJP.

Till late on Thursday, the JD(S) had kept both the parties guessing on whose side it would lean in Kalaburagi, while the BJP expressed confidence that the it would get the mayoral post with help from the regional party.

The JD(S), which has aligned with the Congress and the BJP alternatively, both at the State level and in many local bodies across Karnataka that have thrown up a fractured mandate, is bracing itself to go with either of the two national parties that come up with the “best offer”.

Earlier, after sharing power with the BJP in the Mysuru City Corporation during its previous term that ended in 2018, the JD(S) had no qualms tying up with the Congress during the ensuing term to share the posts of Mayor, Deputy Mayor, and chairperson of different standing committees, till the alliance collapsed last month.

The subsequent election of a Mayor from the BJP, which was the single-largest party in the council, led Congress leaders to accuse the JD(S) of shifting loyalties and indirectly supporting the saffron party. The JD(S) has had alliance with both the BJP and the Congress in the present term of the Mysuru Zilla Panchayat too.

In 2015, the JD(S) won a mere 14 seats in the 198-member Bruhat Bengaluru Mahanagara Palike (BBMP) council, but as neither of the two national parties secured a clear majority, it played the familiar “kingmaker” role. It helped the Congress, then in power in the State, to hold power for four years — 2015–2019.

Every year the JD(S) had a refrain now being heard in Kalaburagi: that they will support any party that gives the mayoral post. Though the JD(S) never got the Bengaluru Mayor’s post, it cornered the posts of Deputy Mayor and chairmanship of key standing committees, including Taxation and Finance, as part of the bargain.

In 2018, however, the equations changed again with the JD(S) and the Congress joining hands to form a coalition government headed by Mr. Kumaraswamy, who appears to have perfected the art of realpolitik to not only protect the identity of his regional outfit in a largely bipolar polity dominated by the two national parties, but also to remain in the reckoning by controlling the levers of power.

The “secular” Congress–JD(S) coalition collapsed after 14 months, after the BJP wooed 16 Congress and JD(S) MLAs in ‘Operation Kamala’. There has been a constant and bitter war of words between the JD(S) and the Congress since, with the latter constantly accusing the former of warming up to the BJP ahead of the next Assembly elections.

(With inputs from K.V. Aditya Bharadwaj)