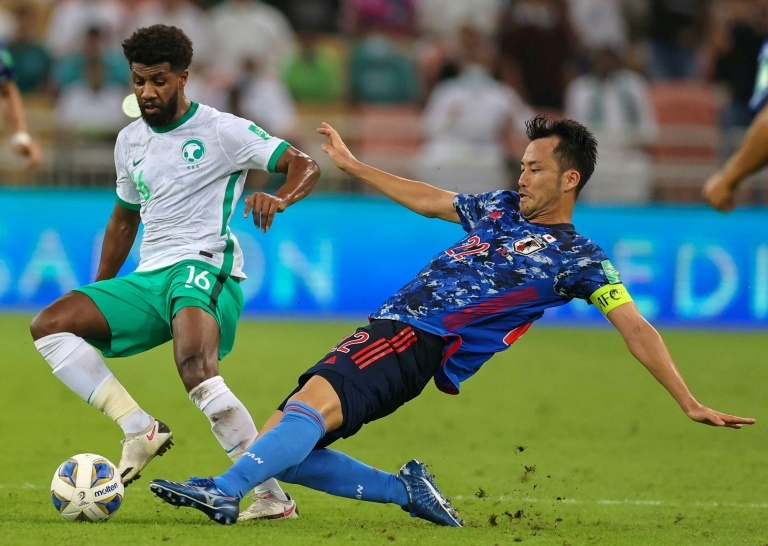 Tokyo (AFP) - Maya Yoshida confronted Saudi Arabia fans and later accused them of making "discriminatory gestures" after defeat left Japan in danger of missing the World Cup for the first time since 1994.

Japan's captain had angry words with a section of the home fans following the qualifying defeat in Jeddah on Thursday, after they were seen taunting him during a post-match interview.

Mobile phone footage showed the Sampdoria defender marching towards the fence separating the supporters from the pitch, jabbing his finger and remonstrating with them.

He then strode off after being restrained by Japanese officials, but later returned to explain his reaction to reporters.

"There were discriminatory gestures," the 33-year-old was quoted as saying by Japanese media, without expanding on what the gestures were.

"It's difficult to accept.It happened in the last qualifiers as well.It's very disappointing."

The result left Japan with just three points from three games in Group B, having started the campaign with a shock home loss to Oman and a narrow away win over China.

"The incident is purely individual and does not represent the Saudi fans," a Saudi source said.

"The match referee did not record the incident and the player did not file a complaint," he added.

Four-time Asian champions Japan, who have appeared at the past six World Cups, now face a must-win home clash with high-flying Australia on Tuesday.

Fans took to social media to call for manager Hajime Moriyasu to be fired, and newspaper columnists were also scathing in their verdict, with Japan's hopes of reaching the Qatar 2022 World Cup in peril.

"Before the match, Moriyasu said it was an away game and he also mentioned the climate and the jetlag," commentator Sergio Echigo wrote in the Nikkan Sports daily.

"I can only think that he was getting his excuses in early for losing."

Echigo pointed out that Japan had only scored one goal in three games, and fans on social media were also unimpressed.

One demanded "give me my sleep back" after getting up at 2:00 am to watch the game.

Another wrote: "I used to look forward to watching Japan games, but if it's going to be like this every time, I'm losing the desire to watch them.It's boring."

Nikkan Sports reported that the nationality of midfielder Gaku Shibasaki, whose errant backpass let in Saudi Arabia for the winning goal, was briefly changed from Japanese to Saudi on his Wikipedia page.