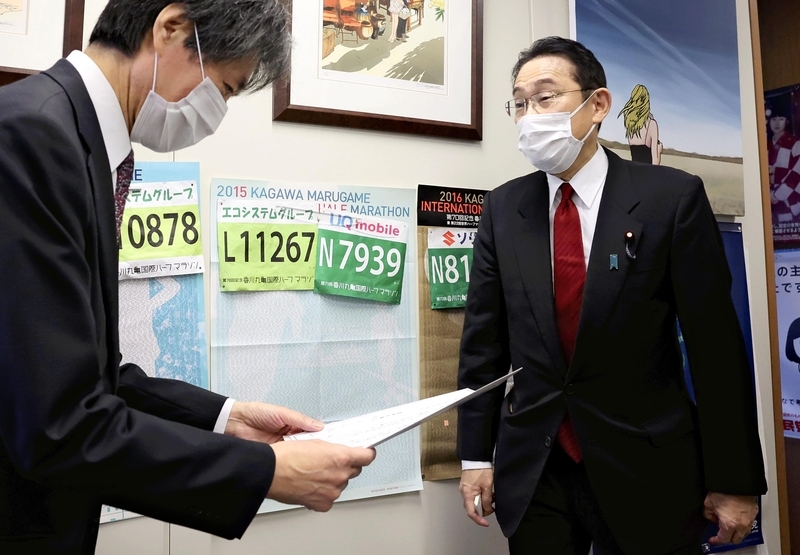 In the run-up to the Liberal Democratic Party presidential election on Sept. 29, much attention is being focused on how the 108 votes of LDP members of the House of Councillors will be cast.

While House of Representatives members prepping for the upcoming lower house election will put more stock in the popularity and name recognition of the new LDP president, many upper house members are more concerned with stability in anticipation of next summer's upper house election.

The votes of the upper house members will likely have a significant impact on the presidential election.

Former LDP Policy Research Council Chairperson Fumio Kishida, who has announced his candidacy for the LDP's top post, met on Friday for about 10 minutes in the Diet with the LDP secretary general in the upper house, Hiroshige Seko, requesting the support from the man who also chairs the 36-member Hosoda faction in the upper house.

The same day, Taro Kono, minister in charge of administrative and regulatory reform, made a courtesy phone call to senior officials of the upper house's 20-member Takeshita faction prior to a press conference to announce his candidacy.

Cohesiveness within the LDP factions is said to be stronger among upper house members, who serve longer terms, than lower house members, and it is believed both Kishida and Kono are aiming to gain the collective support.

Within the party, junior and middle-ranking lower house members who are most at risk of losing their seats have a strong desire to garner public attention during the presidential election so that they can ride the momentum of the new administration to their own reelection. In this respect, Kono's national popularity makes him an attractive choice.

However, there is a distinct mood floating in the upper house.

Unlike the lower house, the upper house election is expected next summer, so there will be long time to address challenges, such as handling the novel coronavirus and debate in the Diet, after the new party president will be decided.

"If they rely on the popularity [of the new LDP president], they will lose momentum ahead of the upper house election," a veteran lawmaker said. "Stability is vital, and Mr. Kishida's down-to-earth stance is desirable."

At a general meeting of the Hosoda faction on Aug. 9, upper house member Shoji Nishida said regarding the party leadership race, "We should consider whether [candidates for LDP president] can make a solid argument in the ordinary Diet session before the upper house election next year, not just thinking about the lower house election."

For LDP upper house members, the bitter memory remains of Prime Minister Shinzo Abe's first administration, when the party was dealt a major defeat in the 2007 upper house election due to chaos in the government stemming from pension system problems and ill-advised comments made by Cabinet members.

This led to a divided Diet in which the ruling parties held a majority in the lower house and the opposition parties took control of the upper. That eventually produced the first postwar change in government, with the then Democratic Party of Japan replacing the LDP as the ruling party.

Should the new prime minister stumble in managing his administration this time as well, there is a risk that it could fire up inter-party politics again before the upper house election. The upper house factions are ready to take a close look at the ability of each candidate to take the reins of power.