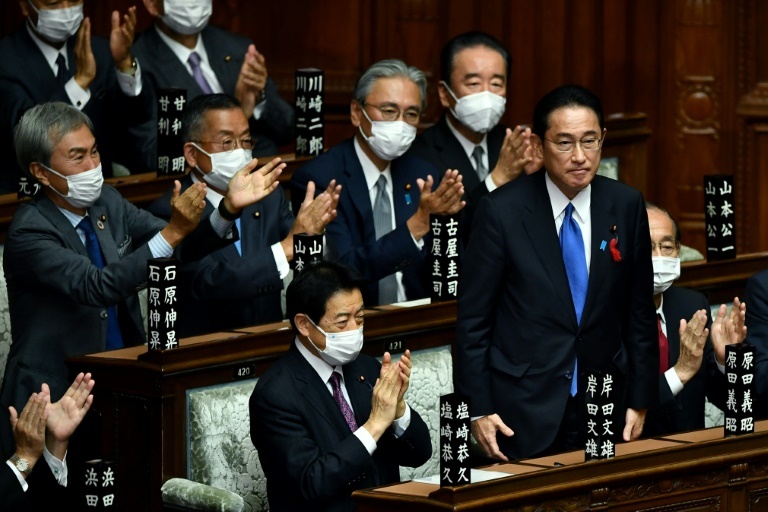 Tokyo (AFP) - Japan's ruling conservatives unveiled their campaign platform Tuesday, saying they would aim to boost defence spending, possibly even doubling it, to counter threats from China and North Korea.

The long-ruling Liberal Democratic Party, led by new Prime Minister Fumio Kishida, is campaigning to maintain its majority in parliament in October 31 elections.

It announced pledges on Tuesday including tackling the pandemic and working to boost the middle class.

And it laid out longer-term policy goals including expanding Japan's defence budget beyond two percent of GDP, a ratio that would put it on par with members of the North Atlantic Treaty Organisation (NATO), the party said.

That would mark a departure from Japan's political tradition of capping defence spending below one percent of its GDP, which stands around $5 trillion.

The Japanese defence ministry is currently asking for around $50 billion for the coming fiscal year from April.

"We will offer policies that will result in firm diplomacy and stronger defence capacity," added Takaichi, a staunch nationalist.

The party said it would continue to press Pyongyang to give up its nuclear weapons, adding that Japan should, in the long term, boost deterrence including the ability to disable missiles from hostile nations.

The status of Japan's military is a sensitive issue as the post-war constitution limits it to a defensive role.

The LDP said it would continue efforts to revise the pacifist document to clarify the status of the military, though the party has struggled to win support for such a move.

Japan's military budget has been rising steadily but gradually for about a decade, and the defence ministry's latest request warns that "the security environment surrounding our country is increasingly severe".

The soft-spoken politician is seen as a dovish centrist and served as foreign minister from 2012 to 2017, with a brief stint as the defence minister also in 2017.

The LDP is expected to retain a majority in parliament, with the opposition still weak and fragmented.