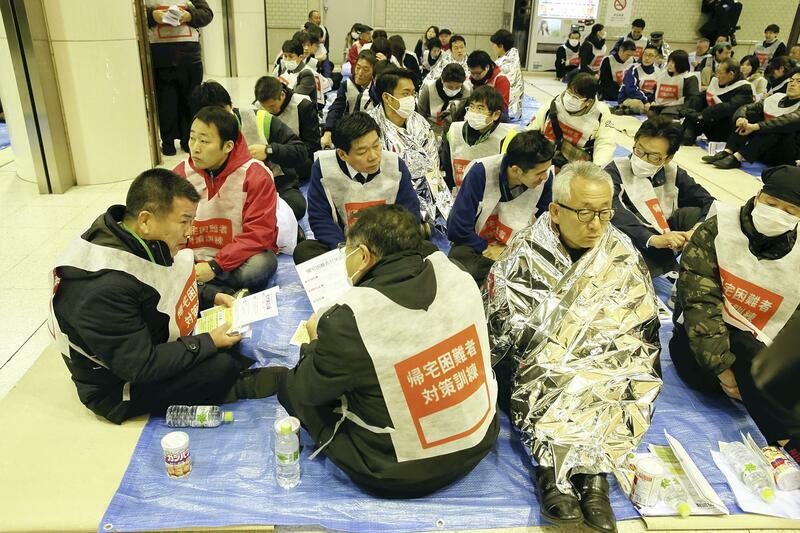 The government plans to review a policy regarding what people should do in the event of a major earthquake in the Tokyo metropolitan area, The Yomiuri Shimbun has learned.

According to sources, a three-stage plan is being considered to determine the course of action people should take if they are not at home when disaster strikes, regarding how, when and whether to return home. The current policy calls for people to remain in situ for three days if a disaster occurs when they are at such locations as their workplace or school.

The government plans to devise as early as this summer more flexible measures that will utilize big data and other tools and incorporate them into its guidelines.

According to an estimate by the Cabinet Office, in the event of an earthquake measuring 7 on the Japanese seismic intensity scale -- the highest level -- about 6.95 million people in Tokyo and its four neighboring prefectures would be unable to return home, about 4.15 million of whom would be stranded in the capital.

After the Great East Japan Earthquake on March 11, 2011, about 5.15 million people in the Tokyo metropolitan area were unable to return home.

Under the current policy, people would be urged not to return home for 72 hours after a major disaster to prioritize rescue efforts during a period regarded as a critical window, after which the survival rate falls sharply.

There would be mass congestion if people tried to return home on foot, by taxi or other means, which would likely interfere with emergency activities and possibly trigger secondary disasters such as stampedes.

Guidelines devised in 2015 called for administrative bodies to "focus their efforts on helping people return home on the fourth day of a disaster or later."

The Tokyo metropolitan government has also encouraged people to "remain at their workplaces, schools or other safe places for three days without moving around unnecessarily."

Improvements to earthquake resistance of station buildings and railway lines in recent years have meant that public transportation systems have been able to resume operations within three days following a disaster in some cases.

As disaster damage varies from region to region, the government has concluded that it is not realistic to uniformly request people to remain in situ, according to a Cabinet Office official.

In light of this, the guidelines will be revised to allow people to return home depending on the disaster situation, to the extent that it does not interfere with emergency activities, according to the sources.

The Cabinet Office plans to collect opinions based on the findings of a panel tasked with discussing measures for people who would have difficulty returning home in the event of a major earthquake in the Tokyo metropolitan area.

Under the envisaged three-stage system, depending on the disaster situation, people would be notified via mobile phone or other means, informing them to (1) remain in situ (2) return home on foot, or (3) return home via public transportation.

The government is also considering providing information on temporary shelters and safe routes to return home.