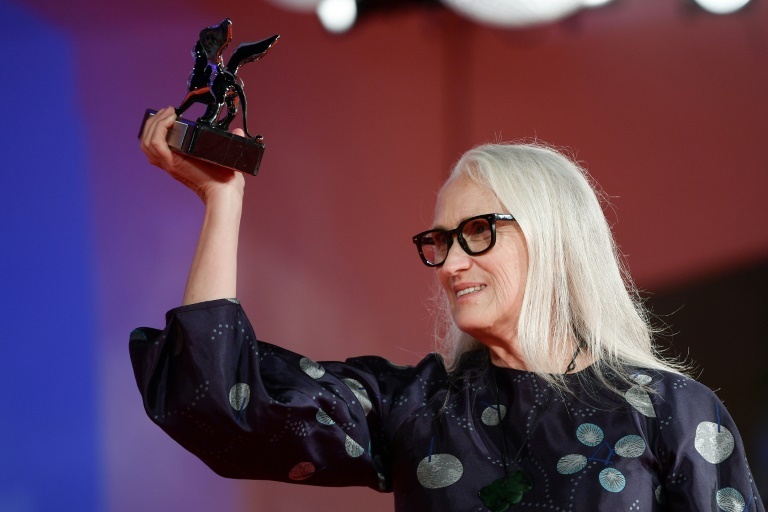 Venice (AFP) - New Zealand's Jane Campion underlined her status as one of the leading film-makers of her generation, taking home the best director trophy at the Venice Film Festival on Saturday.

"The Power of the Dog", an emotionally complex tale about feuding brothers on a 1920s Montana ranch, was Campion's first film in more than a decade and won immediate acclaim from critics.

Campion was already a major figure in the history of cinema as the first woman to win a Palme d'Or at the Cannes Film Festival, for "The Piano", and only the second ever nominated for a directing Oscar.

Benedict Cumberbatch, who stars in her new film, told reporters she was a "key icon" of the women's movement.

"She's a great filmmaker and a very powerful woman in our industry.She handles it all so adeptly, and she's so ridiculously humble about it," he said in Venice.

Campion returned the compliment as she accepted the award on Saturday, saying of Cumberbatch: "He really did go around the world and back again to find this character, to strip himself bare."

Campion was a little-known arthouse filmmaker when she brought "The Piano" to the Cannes Film Festival in 1993.

The New Zealand-set movie about a mute pianist and her daughter starring Holly Hunter, Harvey Keitel, Sam Neill and Anna Paquin, went on to pick up three Oscars and was a huge critical and commercial hit.

"'The Piano' was a massive film for me growing up -- seminal -- all of her work is," said Cumberbatch.

She followed that film with a run of complex films featuring strong-willed women that have established her as one of the foremost auteurs of her generation.

Born in Wellington on April 30, 1954, the second of three children, Campion grew up in a theatrical family.

But despite this early exposure –- her mother was a writer and actress, her father a theatre director and producer –- Campion did not set out to become a filmmaker.

Instead, she studied for a degree in anthropology in New Zealand before concentrating on art in London and Sydney.

Only later did Campion find her calling at the Australian Film Television and Radio School between 1981 and 1984.

Many of Campion's films revolve around gender issues, and she has been praised for the innovation, imagination and intelligence of her work.

"The Portrait of a Lady" (1996) was an adaptation of the Henry James novel, starring Nicole Kidman, while "Holy Smoke" (1999) cast Kate Winslet as a woman experiencing a spiritual awakening on a trip to India.

Campion also cast Meg Ryan in "In The Cut" (2003) as a New York writing professor who has an affair with a detective investigating a local murder.

She first came to Cannes in 1986 when she won best short film with "Peel".

In 1989, her first feature film "Sweetie" -- the story of a young woman's difficult relationship with her unstable sister -- was selected to compete for the Palme d'Or and she returned with "An Angel at my Table" (1990), based on the autobiographies of New Zealand author Janet Frame.

As well as features, Campion has branched out into documentaries such as "Abduction: The Megumi Yokota Story" (2006) about a Japanese student kidnapped by a North Korean agent in 1977.

Her television mini-series "Top of the Lake", with Elizabeth Moss as a detective returning to her home town to investigate a child abuse case, was a hit with audiences and won a string of awards.

In 2014, she served as head of the jury at Cannes, and described the festival as a "mythical and exciting" place where "amazing things can happen".

"I know this because that is what happened to me," she added.