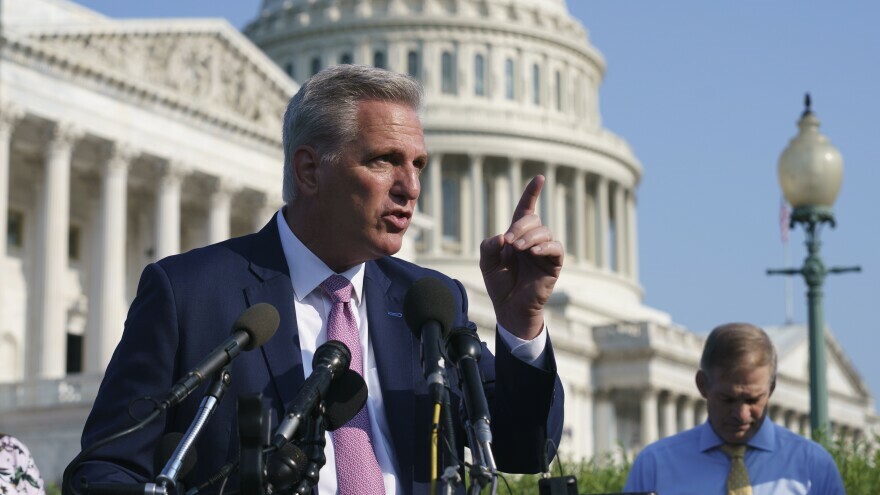 In unprecedented move, Jan. 6 panel subpoenas McCarthy and other Republicans
There is little history of a congressional committee issuing subpoenas for members of Congress. The move now escalates the war…

Axios
One subscription that gives you access to news from hundreds of sites
Jan. 6 panel subpoenas Kevin McCarthy, 4 other GOP House members
WASHINGTON — The House Committee scrutinizing the Jan. 6, 2021, attack on the U.S. Capitol has subpoenaed House Minority Leader…

‘We urge our colleagues to comply with the law, do their patriotic duty, and cooperate with our investigation as hundreds…

The Conversation
Read news from The Economist, FT, Bloomberg and more, with one subscription
Learn More
Who is Peter Dutton? The ex-cop tipped to be the next leader of the Liberal Party

The Conversation
Eden-Monaro and Gippsland are next-door neighbours: why is one seat safe and the other marginal?

The recent federal election saw some close calls but few surprises in the regions, where wild electoral swings are rare.

The Conversation
From analysis to good news, read the world’s best news in one place
‘Landmark’ Amazon shareholder push for greater tax transparency

InnovationAus
Clive Palmer and One Nation flopped at the election. What happened?

By Kyle Cheney and Nicholas Wu

The subpoenas target some of Donald Trump’s closest allies in the House, several of whom were engaged in numerous meetings and planning sessions amid the former president's attempt to overturn the 2020 election results. The move represents a sharp escalation in the select committee’s tactics after months of weighing how aggressively to pursue testimony from their own colleagues.

In addition to McCarthy and Rep. Jim Jordan (R-Ohio), a founding member of the pro-Trump House Freedom Caucus who's close to the GOP leader, the panel sent summons to Reps. Scott Perry (R-Pa.), Andy Biggs (R-Ariz.) and Mo Brooks (R-Ala.). All five lawmakers have rejected investigators' previous requests that they voluntarily testify.

The Republican leader indicated he might not comply with the subpoena.

“My view on the committee has not changed,” said McCarthy, who added he had not yet seen the subpoena. “They're not conducting a legitimate investigation. It seems as though they just want to go after their political opponents.”

The select committee demanded testimony from the five lawmakers in the final week of May.

Members of the select panel have wrestled for months with the question of how to handle their GOP colleagues. The Capitol riot committee's chair, Rep. Bennie Thompson (D-Miss.), had previously doubted the wisdom of that subpoenaing lawmakers, as that would likely trigger a lengthy court fight unlikely to be resolved before in the current Congress.

But the select panel’s thinking appears to have changed, as every avenue of the probe led investigators toward fellow House members.

Some of the subpoena targets — and several other GOP lawmakers — were regularly in contact with Trump and the White House in the weeks leading up to Jan. 6. They helped amplify false claims about the integrity of the 2020 election and were among the earliest to call on colleagues to challenge the results.

But members were mindful that demanding testimony from lawmakers would potentially set a precedent. While House and Senate ethics committees have subpoenaed members and staff before, there’s little precedent for an investigative committee — particularly one mainly guided by the majority party — turning its subpoena powers on fellow members of the House.

Some senior Democrats were unfazed by the potential new precedent.

“I have no problem being subpoenaed, personally," said House Majority Leader Steny Hoyer (D-Md.). "I'll tell the truth. If I have information they need, that's fine.“

The lawmakers receiving subpoenas are expected to cite the protections of the Constitution’s “speech or debate” clause, which prohibits members of Congress from being sued for their official government business. Doing that could trigger a complex and prolonged legal battle, and it’s unclear whether the select committee would pursue expedited consideration from the courts, which could still take months.

The committee is preparing to hold a series of public hearings to lay out its findings next month, and the panel will almost certainly be disbanded next year if Republicans take the House majority.

The panel is particularly interested in McCarthy’s account of a phone call with Trump as rioters descended on the Capitol on Jan. 6. McCarthy, according to accounts provided by another GOP lawmaker, grew heated as Trump attempted to pin blame for the violence on antifa. When McCarthy said the riot was made up of Trump supporters, Trump purportedly replied, “Well, Kevin, I guess these people are more upset about the election than you are.”

The subpoena also comes after leaked audio, obtained by The New York Times, showed McCarthy was sharply critical of Trump in the days immediately following the Jan. 6 attack on the Capitol, even suggesting to colleagues he wanted Trump to resign. But McCarthy abruptly changed course in the following weeks, meeting with Trump in Mar-a-Lago and embracing Trump’s continued hold over the GOP.

Jordan, a close Trump ally, had drawn the attention of investigators over his calls and communications with Trump on and before Jan. 6. Cassidy Hutchinson, a close aide to then-White House chief of staff Mark Meadows, told the select committee that Jordan was regularly in contact with the White House amid strategizing efforts centered on keeping Trump in office. He was present in meetings, Hutchinson said, when the White House counsel pushed back on certain proposed tactics. Jordan declined to comment on the subpoena Thursday afternoon.

Perry, who is now the chair of the pro-Trump House Freedom Caucus, had played a role in attempting to install Trump ally Jeffrey Clark as the acting Attorney General. Investigators obtained texts between Meadows and Perry about Clark, who declined to provide substantive testimony to the panel. Clark had pushed for DOJ to cast a cloud over the election results and encourage state legislatures to reconvene and throw out election results that supported Biden — an important element of Trump’s last-ditch attempt to prevent the transfer of power. Perry told reporters the subpoena was a "charade" but declined to say whether he would comply.

Trump recently turned on Brooks, who was one of his earliest and closest allies in the effort to prevent Joe Biden from taking office. Trump dropped his endorsement of Brooks in Alabama’s contested Senate GOP primary after Brooks began flagging in polls. Shortly after their falling out, Brooks alleged that Trump had pressured him — in recent months — to attempt to “rescind” the 2020 election and reinstate Trump as president.

Brooks said in a lengthy statement that he had not yet seen the subpoena and would weigh in later on whether he planned to comply, adding “if the partisan Witch Hunt Committee wants my observations of events, all it has to do is read or listen to my numerous prior statements."

And Biggs has faced scrutiny from the select committee for alleged contacts with organizers of Jan. 6 rallies that preceded the attack on the Capitol. Plus, the panel has said there’s evidence he was involved in discussions about pardons for people connected to Trump’s effort to subvert the election. Biggs, in a series of tweets, also called the panel's investigation a "witch hunt" but declined to say whether he would comply with the subpoena.

Nancy Vu and Olivia Beavers contributed to this report.

Donald TrumpKevin McCarthyJim Jordan
Sign up to read this article

In unprecedented move, Jan. 6 panel subpoenas McCarthy and other Republicans
There is little history of a congressional committee issuing subpoenas for members of Congress. The move now escalates the war…

Axios
One subscription that gives you access to news from hundreds of sites
Jan. 6 panel subpoenas Kevin McCarthy, 4 other GOP House members
WASHINGTON — The House Committee scrutinizing the Jan. 6, 2021, attack on the U.S. Capitol has subpoenaed House Minority Leader…

‘We urge our colleagues to comply with the law, do their patriotic duty, and cooperate with our investigation as hundreds…