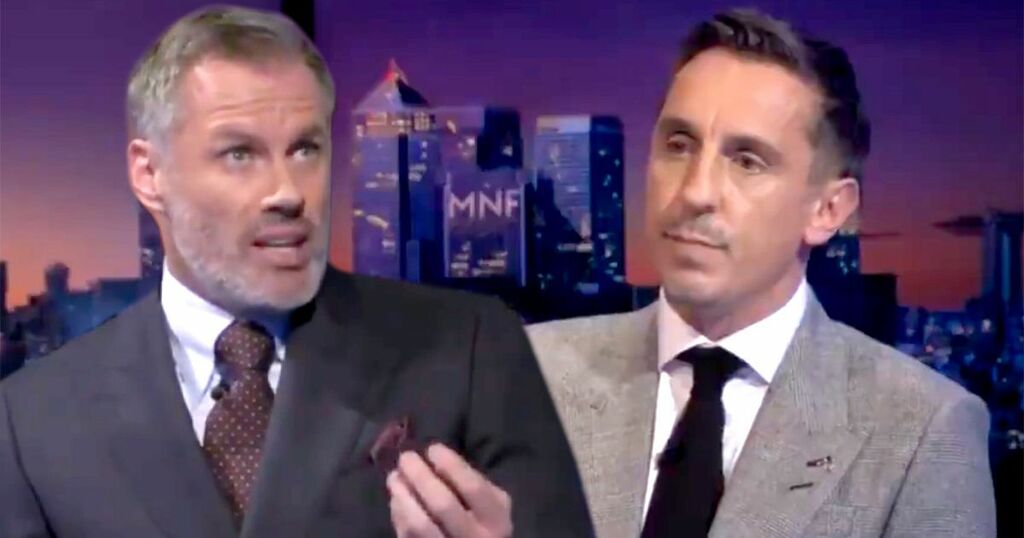 Jamie Carragher was left shaking his head at Gary Neville after labelling his comments on Lionel Messi "ridiculous".

Former Manchester United captain Neville spoke passionately about Ronaldo for some time on Monday Night Football where he explained why he'd rather bring the 36-year-old off the bench to win a game than Lionel Messi.

He explained his point in great detail, with Carragher allowing his Sky Sports co-pundit to talk at length.

"I think he makes them more likely to win the title than I thought a few weeks ago," said Neville of Ronaldo.

"Something inside me tells me I don't quite think he'll quite be the player to make them win the title this season. It's Chelsea and City in terms of teams.

"The question I was asked this morning was about a guy driving me in, I've always ignored the Ronaldo vs Messi argument because I see it as being a fantasy.

"I looked at his goal breakdown, he can score with his left foot, his wrong foot, he can score from distance, he's probably the best poacher in all of football.

"He can score penalties, and if you hang it up there in the box he can score a header. He might even score a free-kick.

"If you think about the impact from a player and what is the greatest of all time, I've never really answered it, but you look at the stats. It's a phenomenal amount of goals with his wrong foot, it's an outrageous amount of headers.

"So many goals inside the box, a lot outside the box. Penalties, a massive amount. 125.

Ronaldo... or Messi? Have your say in the GOAT debate in the comments section.

"Hat-tricks and free-kicks. It actually took me to a point of how we're going to discuss Ronaldo tonight. I do think he's the player I'd bring off the bench if I had to win a football match.

"That's not bias, that's me looking at answering that question of who I would trust to bring off the bench the most in the most different ways. Who is the most complete player.

"Messi's goals and Ronaldo's goals, there's no doubt Messi has scored an obscene amount of goals, he's a ridiculous player. It's a hypothetical question.

"But for me, apart from the wrong-footed goals, the headers, Ronaldo's scored 30-40 per cent more with his wrong foot, and he's scored more penalties. It took me to a point where he's more complete.

"The Ballon d'Ors are similar, Messi's won more league titles with that Barcelona team. The Champions Leagues along with the variety of goals he's scored leads me to think he's the best player of all time."

Eventually, Carragher stepped in to share his thoughts on the debate, and while he agreed Ronaldo is a class act, the former Liverpool defender claimed Neville's comment on Ronaldo being the better impact player was "ridiculous".

"Nobody's not a fan of Ronaldo," Carragher said. "Ronaldo is not the greatest player of all time. His mate here is. [Messi]. You talk about who you'd want coming off the bench, Messi has scored twice as many goals from the bench as Ronaldo has ever scored.

"That's ridiculous what you say about him coming off the bench because he can score different types of goals. It doesn't matter. Even if Messi scores more with his left foot, and the stats prove he scores more goals than Ronaldo.

"Two wonderful players, but what Ronaldo does and all the attributes in terms of heading, free-kicks, I completely agree. In terms of the complete player and doing things Messi couldn't in terms of weak foot and in the air.

"Messi takes you to a place where you can't believe what you're seeing. Ronaldo does things other players can do.

"You've seen someone score a great header before, free-kicks, all those things. Messi can do things we've never seen before, and yes it's close. But in terms of goalscoring, that's not right.

"I think there's been a lot of fanfare in terms of United and best players, and I think you [Neville] got a bit carried away."