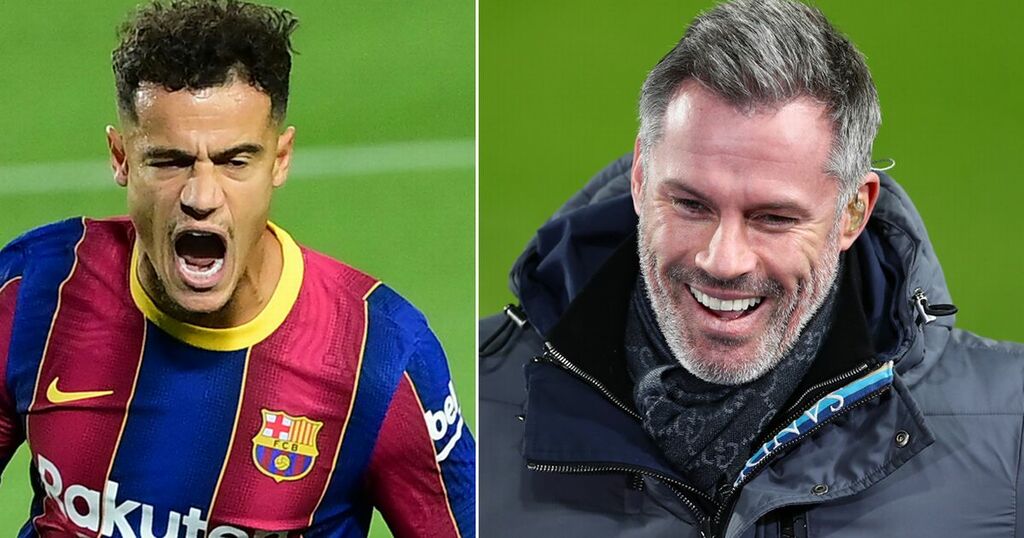 Jamie Carragher has insisted his former side Liverpool made the right decision to opt against re-signing Philippe Coutinho four years after he first left Anfield.

The Brazilian has instead penned a loan deal with fellow Premier League outfit Aston Villa who are now managed by Liverpool icon and a former teammate of Coutinho's in Steven Gerrard.

Coutinho's time at FC Barcelona failed to live up to the expectation many of the Camp Nou faithful had for him upon his arrival in the winter window of 2018.

The 29-year-old has long been linked with a move back to the Premier League as it became clearer with each passing match-week his days in Catalonia were numbered.

HAVE YOUR SAY! Should Liverpool have tried to re-sign Coutinho? Comment below

Having been told by newly-appointed Barcelona boss Xavi that he was surplus to requirements, Coutinho was enticed back to England by the prospect of playing under his old Liverpool captain for the remainder of this season.

There were lingering rumours suggesting Reds boss Jurgen Klopp may have been tempted to bolster his attacking midfield options by overseeing a return to Anfield for Coutinho.

Liverpool legend Carragher is seemingly thankful that the deal did not go ahead according to his twitter profile.

The player-turned-pundit was conducting a question and answer session with his 1.8m followers when he was asked "Should Liverpool have re-signed Coutinho?".

Carragher was particularly blunt in his response as he simply wrote: "No!".

Though Carragher clearly doesn't think Coutinho is up to the task of plying his trade for Liverpool once again, Gerrard has waxed lyrical over the Brazilian after he committed his short-term future to Villa.

"Sixty three caps for Brazil, a serial winner, played for Barcelona, was incredible at Liverpool," the Villa boss explained.

"I can understand why a lot of supporters up and down the country are speaking about him.

"I don’t think you get a nickname as a Magician if you’re not a special footballer. He’s someone I’ve got an incredible amount of respect for.

"He won two league titles for Barcelona, he won two Copa del Reys. If you go and have a look at his Wiki page, you’ll see a serial winner wherever he’s been."

As things stand, Villa's deal for Coutinho is just a loan stint with the club until the conclusion of the Premier League season.

However, if the 29-year-old manages to recapture the kind of form that prompted Barcelona to pay Liverpool £140m for his signature in 2018 Villa have the option to purchase Coutinho on a permanent basis for £33m.