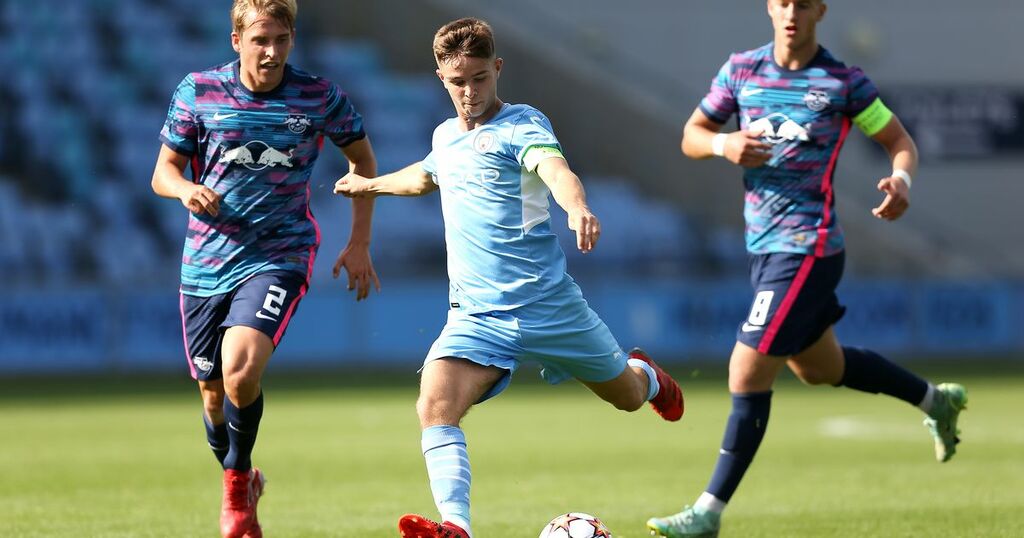 James McAtee continued his strong start to the season by helping Manchester City Under-19s to a 5-1 victory in the UEFA Youth League.

The Blues hosted RB Leipzig at the Academy Stadium on Wednesday afternoon ahead of the Champions League match. McAtee, Luke Mbete and Sam Edozie were all named in a strong starting XI from Brian Barry-Murphy, although Cole Palmer, Romeo Lavia and Liam Delap were all absent from the squad.

City got off to a dreadful start as they backed off to a man in the third minute when the visitors carried the ball from the centre-circle into the penalty area. With centre-back Finley Burns among the Blues offering too much space, the ball was played back for Sidney Raebiger to fire past Mikki van Sas before the goalkeeper had even sighted it.

With McAtee on the pitch though, it did not take long for the home side to turn the match in their favour. Luke Mbete rolled the ball forward into the playmaker's feet in the 12th minute and he did the rest, wriggling away from the Leipzig defenders before smashing the ball into the far corner before the goalkeeper had set himself.

Josh Wilson-Esbrand had a deflected effort tipped over the bar as the home side continued to push, and they were rewarded for their ambition when Darko Gyabi was brought down in the box after more good work from Oscar Bobb and the nimble winger stepped up to put City ahead.

McAtee continued to shine and it was his inviting ball just before the hour mark that swung across the Leipzig backline and gave Tai Sodje an easy finish into an empty net. Edozie completed a comprehensive win when he stroked home substitute Micah Hamilton's low cross into the box, evaporating the last bit of fight from their beaten opponents.

With City attacking at will, Hamilton burst through some tired challenges to tee up McAtee in the box for his second of the afternoon and tenth of the season on just his sixth start. With two assists as well, a player that has already impressed Pep Guardiola has done his chances of a first-team debut in the Carabao Cup next week no harm at all.