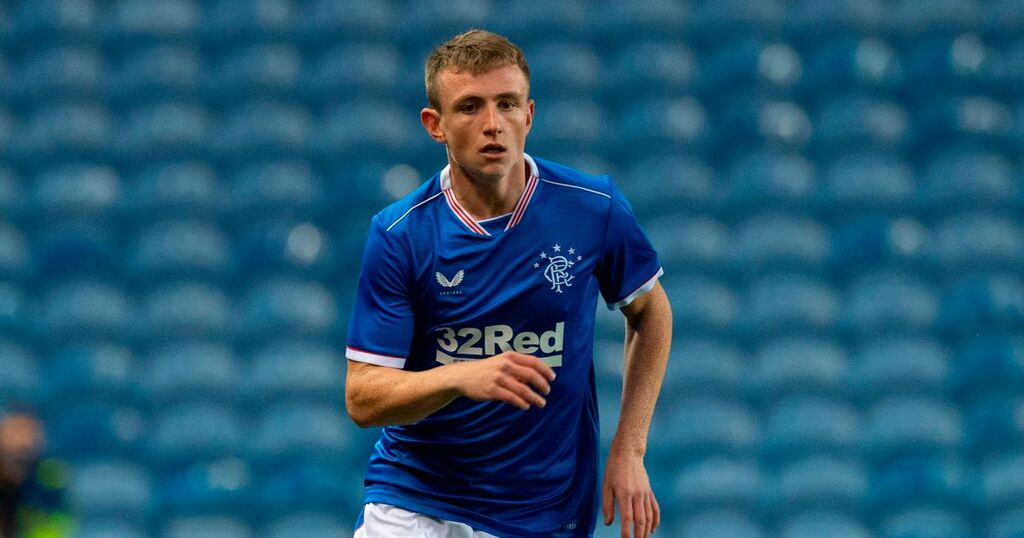 They were tipped as the two young guns who would eventually take over from Rangers’ flying full-backs.

Nathan Patterson and James Maxwell were hailed as the long-term replacements for James Tavernier and Borna Barisic.

But Patterson was sold for a club record £16million fee to Everton last week, having failed to permanently dislodge the Gers captain.

And now Maxwell looks set to leave Govan without getting a serious crack at trying to oust the Croatian left-back.

That might dishearten most youngsters – but not the 20-year-old.

He has been outstanding in two loan spells away from Ibrox, at Queen of the South and Ayr United. Either in defence or midfield, he’s been a stand-out at Somerset Park and Maxwell scored in Sunday’s clash with Arbroath in the Championship.

But with Barisic and Calvin Bassey ahead of him in the queue at Rangers, he’s accepted that he’ll have to move on to further his career.

His contract is up this summer and so far Gers have opted not to offer a new deal.

Premier League outfit Leeds United are keen on him as well as Scottish sides Partick Thistle and Dunfermline.

He was delighted to see pal Patterson get his big-money move to England.

But Maxwell says it just goes to show how difficult it is for any young player to break into Giovanni van Bronckhorst’s first team.

He said: “I’ve accepted the fact that I’ll probably need to leave Rangers. At a big club, it’s always hard to break through. I knew my chances would be limited.

“There’s so much pressure, especially last season when they had to stop 10 in a Row.

“Borna has been on fire for the last year-and-a-half and now Calvin is doing really well too.

“I’ve just had to focus on my loans, making sure that I get game time and play well.

“I’ve always had it in the back of my head that if it didn’t happen for me, I needed to have a career regardless. If it’s not at Ibrox, I’d go somewhere else.

“I feel I’ve done what Rangers wanted me to do when they sent me on loan. So there’s a wee bit of frustration but I’m not angry. It isn’t keeping me up at night, thinking: ‘What else can I do?’.

“I’ve given myself the best opportunity and it looks like it won’t be enough for Rangers. That’s fair enough.

“Rangers need me to be at the level of Borna and Calvin now, so it’s difficult.

“When it comes to a match day, these boys take their levels up a few gears.

“It’s hard to say whether I could play in Rangers’ first team or not. I believe I can but need to prove I’m better than Croatia’s left-back, so it’s not easy.

“Look at Nathan, he did everything he could yet Tav is still first choice.

“Nathan has been exceptional. He has literally done everything that was asked of him.

“He played and scored for Scotland, he played in Europe and Old Firm games.

“But he had the best full-back in the league in front of him.

“Nathan is a top talent and deserved his big move.

“He didn’t play as much as he’d have liked at Rangers which goes to show how tough it is to break in – even when you’re first-choice right-back for your country.”

Maxwell trained regularly with Rangers’ first-team squad under previous gaffer Steven Gerrard between his loan stints at Palmerston and Somerset.

And during a winter training camp in Dubai, Barisic took him under his wing.

He said: “My style at left-back is probably the opposite to Borna’s. He’s about taking one or two touches, hitting the line and getting crosses in.

“I see myself as someone who links with my wide players a bit more, playing one-twos.

“So there’s definitely stuff I can learn and add to my game just by watching Borna.

“When I went to Dubai with the first team, he was great.

“He took me aside, telling me what I was good at and what I had to work on.

“But it was more about watching him close up. That’s when you see his real quality.

“I’m a better player now because of the two loans.

“I’ve felt comfortable and at ease with Ayr because I know I can play at this level.

“That has given me freedom. Playing in midfield has also helped, taking the ball in and being confident in possession.

“I’ve come on leaps and bounds. You go from Rangers, where you’re used to playing nice football and expecting to win, to having to fight and scrap for points.

“You have to bring your own quality to the game. I feel I’ve done that.”

If his future lies away from Ibrox, Maxwell wants to find a permanent home to show how good he is. He said: “Rangers haven’t
committed to saying there’s a new deal on the table for me.

“So with a bit of interest in me, it looks like I’ll be moving on.

“I want to kick on in my career now that I’ve had a taste of it.

“There’s nothing to fear. When I first joined Rangers from Falkirk I said that if the first team was out of sight, I’d go elsewhere.

“I knew what I was getting into, in terms of the amount of youngsters who make the first team at Rangers.

“I’ve learnt a lot in the four years I’ve been here but I can’t stagnate.

“And I’d never write off coming back to Rangers one day.”