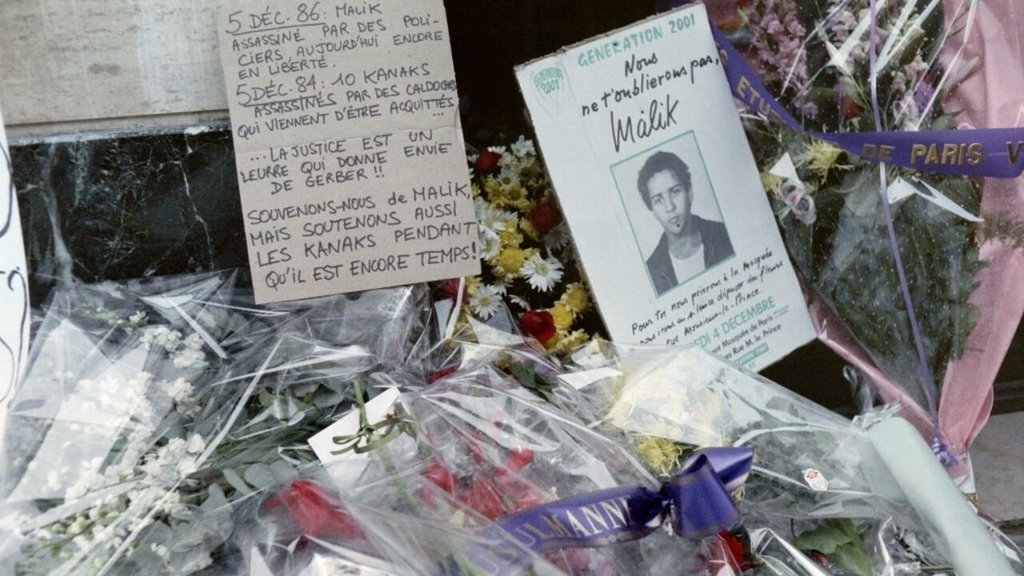 Police killing of French-Algerian student Oussekine remembered on screen, at last
Thirty five years after Malik Oussekine was beaten to death by police during a student demonstration, his story is finally…

F1 22 wants us to live the life of a superstar, on and off the track.

USA Today Sports Media Group
‘It was as if he set out to destroy my sanity’: how the spy cops lied their way into women’s hearts – and beds

For years, undercover officers from the Metropolitan police deceived and manipulated female activists such as McDonald’s campaigner Helen Steel. Her…

The Guardian - UK
One subscription that gives you access to news from hundreds of sites
Tracy Flick vs. Toxic Masculinity

The Atlantic
Has Tucker Carlson created the most racist show in the history of cable news?
The NY Times did an exhaustive survey of the Fox News host's broadcasts. Reporter Nicholas Confessore says Carlson's show is…

While you watch the new police drama, Jerusalem, on Hot 3 which begins May 12 at 8:15 p.m. (and is also available on Hot VOD and Next TV), it is understandable if you feel at times as if you are watching the news. The series tells the story of police officers who investigate any trouble linked to digging in the Old City and it opens a few days before a confluence of holidays of different religions, which, as we have just seen, tends to lead to trouble.

It tells a complicated story of dirty cops, honest police, true believers, drug dealers, opportunists, Waqf representatives, fanatics, corrupt engineers, antiquities scholars, scheming Christian clerics challenging their rivals and teens influenced by their parents who get caught in the crossfire. By the end of the first episode, naturally, there is also a murder.

The series features a mini Fauda reunion as Amir (Doron Ben David, who also just starred in the Kan series, The Lesson) plays a seasoned detective who knows his way around the tunnels but is ethically challenged. Hisham Suleiman is Riad, a local Muslim leader, who is capable of stirring up trouble or calming the waters as it suits him. Other Fauda alums include Alaa Dakka as one of Riad’s trusted associates. Rotem Sela of The Beauty and the Baker, tries to look unglamorous with brown hair and a scar as Shira, the straight-arrow detective coming back to work after an injury who is assigned to work with Amir.

As they investigate, the Waqf tries to stop a yeshiva from digging underneath the streets, while Christian clerics call in representatives from the Vatican. Amir tries to raise money for his son’s bar mitzvah any way he can and tries to win back his estranged wife, who works at a nearby museum.

About eight years ago, there was a big-budget English-language series called Dig, starring Jason Isaacs, that tried to cover some of the same ground, but it didn’t last long, partly because it didn’t present real insider knowledge of Jerusalem’s Old City, as this series does. The fact that once the Gaza War started in 2014, Dig moved to Croatia and shot the rest of the season there didn’t help, of course. Jerusalem has clearly been carefully researched and mixes Amir’s cynicism with genuine fascination with the inner workings of the Old City and a desire to tell its stories. An awful lot of characters and plotlines are introduced in the first episode, but as Amir and Shira start to focus on the murder, the storylines come together and the suspense builds.

A very different city and a very different police force are the subject of the new HBO series, We Own This City, by David Simon and George Pelecanos, the creators of The Wire. If you feel out of the loop on US racial politics or just want to see a suspenseful drama about police corruption, you will want to tune into this miniseries, which is now running on Hot HBO, Hot VOD, Next TV and on Yes VOD and Sting TV. It is a fact-based story about an investigation into a police officer, Wayne Jenkins (Jon Bernthal of The Walking Dead), once considered one of the stars of the Baltimore Police Department, who was accused of misusing his power while he was heading up a firearms unit.

We have all read about police brutality and misconduct during the past two years or more, but to see in detail what that actually meant in Baltimore is eye opening. Bernthal is good as the cocky officer you will love to hate at first but whom you will likely become appalled by, as is the cast-against-type Josh Charles, best known as Will on The Good Wife, as the even more violent Daniel Hersl.

Bernthal is the standout and Jamie Hector is very likable as a cop who tries to be what they call good police in Baltimore. There are a number of alumni from The Wire, including Delaney Williams as the superficially helpful but ineffectual police commissioner and Domenick Lombadozzi as the head of the police union. But, this is not The Wire 2.0. It’s a different story, one that is focused on a particular scandal and not epic in scope. If you miss The Wire, watch it again, but don’t come to this expecting the emotional rollercoaster of that series.

Some of the characters are a bit one-note, but the corruption portrayed here is so egregious there is no way to make everything multilayered. Simon, who has a blog called The Audacity of Despair (a play on former president Barack Obama’s phrase, “The Audacity of Hope”) is the perfect person to tell this story, not only about what the cops got away with but how the rest of the city government looked the other way for years.

Two long-running, popular Netflix series recently came to an end, Grace and Frankie and Ozark. The songs played over their final credits are similar, but have a very different effect: “You’re All I Need to Get By” by Aretha Franklin in the former and “Love and Happiness” by Al Green in the latter. In Grace and Frankie, it’s an upbeat message that underscores the message of friendship at the core of the series, while in Ozark, it couldn’t be more ironic.

In each series, the final half of the last season had some suspense. Grace and Frankie is a series about two very different women: Grace, a perfectionistic, chilly woman who started a cosmetics brand, played by Jane Fonda, and a sometimes outlandish hippie, portrayed by Lily Tomlin. The two are forced into a fast friendship when it turns out that their husbands (Martin Sheen and Sam Waterston) who run a law firm together, have been in love for years and have decided to marry.

Abandoned and anguished, Grace and Frankie find they have a deeper bond with each other than they have ever had with anyone else. They also realize that their friendship is likely to end abruptly, with one of their deaths, as both are beset by various health woes, like their former husbands. Frankie tells Grace she would be “open” to “doing a Thelma and Louise” kind of ending-it-all stunt, to which Grace replies, “Pass.”

I’m not going to give away the ending to Grace and Frankie, but I will reveal a very charming and well-placed celebrity cameo in the finale, Dolly Parton, who costarred with Fonda and Tomlin in the iconic comedy of office sexism, 9 to 5, and it is great to see them reunited, even if for a single scene. When the Aretha Franklin anthem plays at the end, those who have enjoyed their story for seven seasons will likely not be able to stop from tearing up.

But, “Love and Happiness” at the end of Ozark is heavily ironic, of course, since the show is about a middle-class couple that gets involved in laundering money for a drug cartel and find they get into it more than they would like to admit. Wendy and Marty Byrde (Laura Linney and Jason Bateman) may be the greediest, most self centered and evil characters that this Golden Age of Television has come up with and that’s saying something.

Their story is littered with bodies and betrayals and I often found myself asking why I was sticking with the show, but there was always just enough suspense to keep me hooked. The real revelation about the final episodes of Ozark is Julia Garner as their local protégé, Ruth. I have praised her before, but she has such a dramatic arc towards the end and brings her character to life in such a gripping way, that surely she will add a third Emmy for this series to her accomplishments. She also starred in and was utterly different but equally credible in Inventing Anna.

The second season of Hacks, the smart, funny show about an older Las Vegas standup comic and the young woman who comes to write for her, for which Jean Smart won a well-deserved Emmy, is coming up on Yes VOD and Hot VOD on May 13.

Police killing of French-Algerian student Oussekine remembered on screen, at last
Thirty five years after Malik Oussekine was beaten to death by police during a student demonstration, his story is finally…

F1 22 wants us to live the life of a superstar, on and off the track.

USA Today Sports Media Group
‘It was as if he set out to destroy my sanity’: how the spy cops lied their way into women’s hearts – and beds

For years, undercover officers from the Metropolitan police deceived and manipulated female activists such as McDonald’s campaigner Helen Steel. Her…

The Guardian - UK
One subscription that gives you access to news from hundreds of sites
Tracy Flick vs. Toxic Masculinity

The Atlantic
Has Tucker Carlson created the most racist show in the history of cable news?
The NY Times did an exhaustive survey of the Fox News host's broadcasts. Reporter Nicholas Confessore says Carlson's show is…