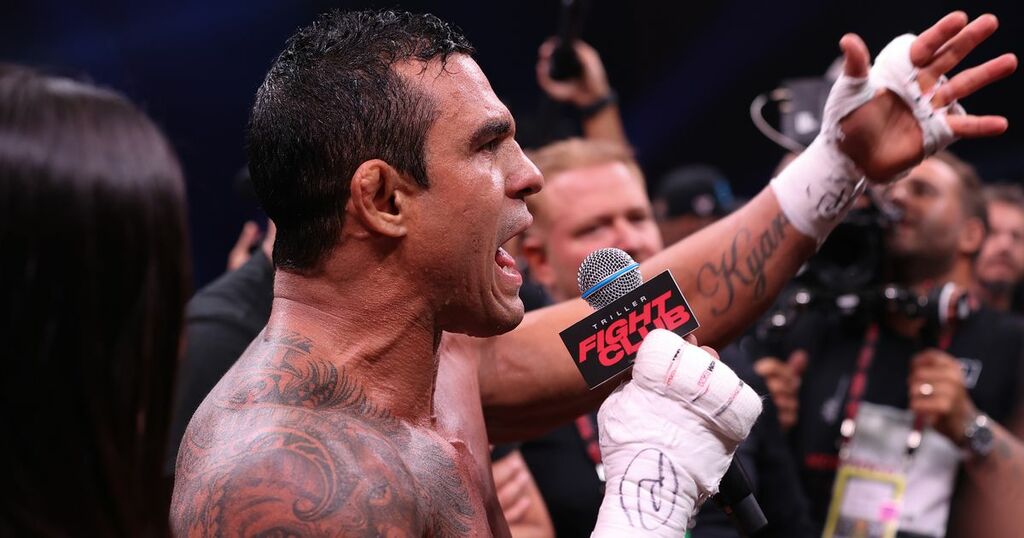 Jake Paul claims Vitor Belfort's "obsession" with fighting him began before the YouTuber had even laced up a pair of gloves.

Belfort offered Paul $30million to fight him after knocking out Evander Holyfield in the first round of their exhibition on Saturday night.

Paul has rejected the former UFC star's advances and does not believe his promoters Triller Fight Club have the money they claim.

And he revealed he has met Belfort before, saying the ex-UFC champion has been calling him out for the last few years, since before his white-collar debut against Deji Olatunji in 2018.

“It just seems a little bit desperate with them getting Vitor to call me out," Paul said during an interview on the MMA Hour.

"It’s like clout-chasing, this guy has been in my DMs since 2017, you know, begging for a fight."

Paul was first called out for a boxing match by fellow YouTuber KSI in February 2018, and started training when a fight date against his brother Deji was confirmed for August of that year.

This means that Belfort would have been one of the first notable stars to call Paul out for a fight in his life, at the peak of his YouTube fame.

And Paul says that the rivalry came to life more recently at a college football game, with Belfort calling him out in person during an Ohio State championship game.

"And then, I’m sitting at Ohio State NCAA championship football game," Paul continued. "And he’s like, in the stands; comes running up to me with his son.

"His son asks for a picture and he’s like, sitting there and looking at me, like, kind of mad, and I’m like, ‘What’s going on, sir? Is everything okay?’

“And he wouldn’t leave and he said, ‘Do you recognize me?’

"So just out of respect I said, ‘You look kind of familiar'. and he’s like, ‘I’m Vitor Belfort. You know, I’ve been thinking about it…’

Who would you like to see Jake Paul fight next? Let us know in the comments section!

"And he starts to go on this five-minute pitch about why we should fight - I’m like, ‘Dude, like, I’m watching a football game. Like, please leave me alone, old man’.

"Since that day, he’s been obsessed with this idea of fighting me.”

Paul is, however, more likely to face Tommy Fury in his next bout - and is also more interested in a fight with Jorge Masvidal.

The YouTuber has publicly turned up the heat on former UFC welterweight title contender Masvidal while behind the scenes his team are continuing to confer with Frank Warren about a December fight.

And during the appearance on The MMA Hour, Paul also alluded to potential bouts with the likes of Nate Diaz or Anderson Silva down the line, further hurting Belfort's chances of the big money fight.