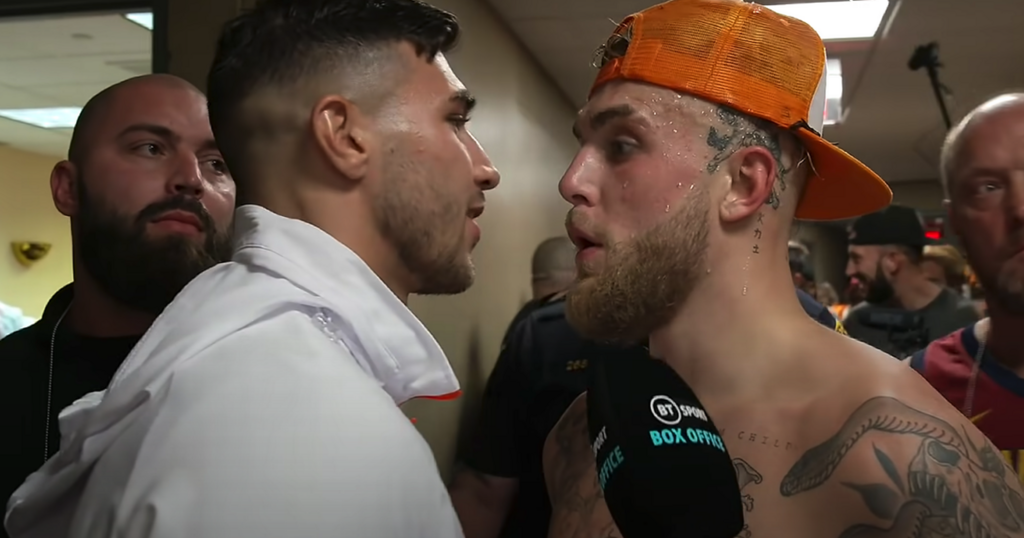 Paul outpointed Woodley after eight rounds in Cleveland in August to extend his unbeaten record to 4-0.

The win seemingly set up a fight with Fury, who defeated Paul's sparring partner Anthony Taylor on the undercard of the event.

Fury - who is the half-brother of WBC heavyweight champion Tyson Fury - is undefeated as a professional and picked up his seventh win against Taylor.

And despite verbally agreeing to a rematch with Woodley after their fight, Paul says he wants Fury next.

He told the 'Full Send' podcast: “I think Tommy Fury is at the top of that list. He’s skilled, he’s undefeated, and he’s a real boxer.

“He has like 4 million followers on Instagram which is good engagement. He has the fans from his relationship show [ Love Island ].

“It all starts with the numbers, like would the fight sell a lot? Would people actually care? I could go and fight the infamous jiujitsu guy who doesn’t shut the f*** up on social media, but it’s a hard sell.

"This guy just beat a UFC hall of fame legendary striker, we’re not going to put him up against a jiujitsu guy in a boxing match.

“So after each fight, we go back to the drawing board and we’re like ‘who makes the most sense’ ⁠— can they actually sell pay-per-views? Can we sell this fight as like ‘this is a tough fight for Jake.'

Paul revealed a "hit list" before his fight with Woodley that included names such as pound-for-pound No.1 Canelo Alvarez and UFC stars such as Kamaru Usman.

But it seems that a showdown with Fury - who was also on that list - is edging closer as Paul's trainer told Mirror Fighting talks are underway for a December fight date between both teams.

The 24-year-old isn't keen on rematching Woodley or taking fights with celebrities. After being the favourite for most of his professional fights, Paul admitted he wants to be the underdog for his next fight.

He continued: “I’ve been the favourite, so now I almost want to go into a fight where it’s like ‘there’s no way he’s going to do this.’

“I just want to keep proving people wrong because I could take a social media influencer and fight them right now and make a decent bag. It’s just a tough sell because I did all of that.

“As long as I’m having fun with it, trolling and making myself laugh and it’s authentic to what I want to say and believe. I’m not going to do something that gets myself killed, but also I’ll toe that line and mess with these guys.”