Jaishankar stresses on connectivity, proposes that Chabahar Port be included in the North-South Transport Corridor 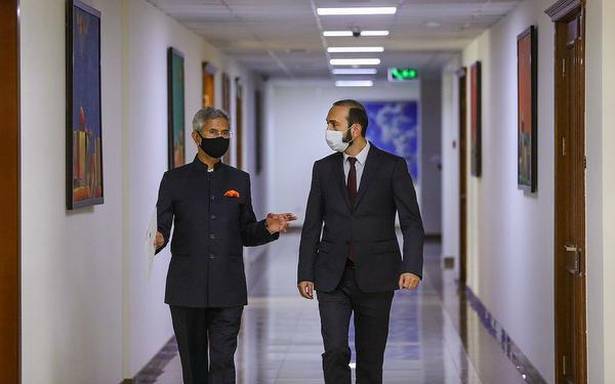 Stressing on the need for enhanced connectivity, External Affairs Minister S. Jaishankar on Wednesday proposed that the strategic Chabahar Port in Iran be included in the North-South Transport Corridor, as he agreed on a roadmap for future course of cooperation at meetings with Armenia’s top leadership.

Mr. Jaishankar, who arrived here on Tuesday on the last leg of his three-nation tour to Central Asia with an aim to further expand bilateral ties and discuss key regional issues including the developments in Afghanistan, is the first External Affairs Minister from India to visit Armenia.

“Thank PM @NikolPashinyan of Armenia for receiving me today. Conveyed greetings of PM @narendramodi. Meeting brought out the many convergences and shared outlook of our two countries. We agreed to develop a broad agenda of practical cooperation that is to our mutual benefit,” Mr. Jaishankar tweeted.

Earlier, the External Affairs Minister held bilateral talks with his Armenian counterpart Ararat Mirzoyan and addressed a joint press meet with him.

“Both India and Armenia are members of the International North-South Transport Corridor (INSTC), which has the potential to bridge the connectivity barrier. So Minister Mirzoyan and I discussed the interest which Armenia has shown in the utilisation of the Chabahar Port in Iran and being developed by India,” Mr. Jaishankar said in his remarks.

“We also proposed that the Chabahar Port be included in the International North-South Transport Corridor; we welcome the use of the Chabahar Port and any other initiative that will encourage regional connectivity,” he said.

The Chabahar port in the Sistan-Balochistan province in the energy-rich nation’s southern coast is easily accessible from India’s western coast and is increasingly seen as a counter to Pakistan’s Gwadar Port located at a distance of around 80 km from Chabahar.

The first phase of the Chabahar port was inaugurated in December 2017 by then Iranian President Hassan Rouhani, opening a new strategic route connecting Iran, India and Afghanistan bypassing Pakistan.

The Chabahar port is being considered as a gateway to golden opportunities for trade by India, Iran and Afghanistan with Central Asian countries, besides ramping up trade among the three countries in the wake of Pakistan denying transit access to New Delhi.

Asked about India’s interest in developing the Chabahar Port, Mr. Jaishankar said, “We are interested because if we develop more ports in Iran and then connectivity from those ports to northwards of Iran, it opens up more trade routes which are land-based, which are more efficient than these sea-based routes.

“So the key today to economic progress is to be more competitive in terms of movement of goods and that is why this is important and, at least, I mentioned Chabahar to the Minister because it is a port in Iran which India is developing and for us it opens up a pathway at least one side to the Caucasus (intersection of Europe and Asia), opens up a different pathway to Central Asia and it is an initiative on which we are working with the Russians very closely.”

Mr. Jaishankar said that India’s position has been consistent on the regional security situation in light of the developments in the Caucasus regions since last year.

“Since the beginning of the hostilities, we have been calling for a peaceful resolution of the conflict by diplomatic means. We have supported the bilateral ceasefire of November 9-10, 2020. India has always been in favour of peace and stability in this region,” he said.

He said that connectivity is a very important subject of international collaboration.

“Now, we saw just a little while ago what happened at the Suez Canal and how much it disrupted trade between Europe and Asia. So for us, the International North–South Transport Corridor is a very, very important initiative. We have invested a lot of energy, given it a lot of priority and we, I think, all our participation (member countries) will add more options and more possibilities to an initiative which has been under discussion,” he said.

Mr. Jaishankar said that the two Ministers also did a comprehensive review of the bilateral relations. “We discussed regional and multilateral issues and most importantly agreed on a roadmap for future course of cooperation and exchanges,” he said.

Noting that bilateral relations have expanded in political and cultural fields, Mr. Jaishankar said that there is clearly scope for further strengthening of economic and commercial cooperation and tourism, hospitality, infrastructure and investment.

He said that one important bridge between India and Armenia is the presence of a large number of Indian students.

“There are almost, I think, 3,000 of them who are pursuing medical education in Armenia. We very greatly appreciate the efforts of the government of Armenia and people for the welfare of the Indian community, in particular the students during the pandemic,” he said.

He said that India and Armenia’s progression in the United Nations and multilateral forums has been exclusive.

He said that Armenian heritage in India has been preserved with great care and respect of all traditions and the Armenian community’s contributions to India’s progress has been noteworthy.

“We recognise that Armenia has gone through a very difficult phase last year, so let me take the opportunity to convey my sincere condolences on behalf of the government and the people of India to the Armenian people, especially those who lost their near and dear ones,” he said.

Mr. Jaishankar also expressed his pleasure on his meeting with President of the National Assembly of Armenia Alen Simonyan.

“Discussed the importance of nurturing the bonds between our two parliamentary democracies. Spoke about bringing our people closer together through greater cooperation in different domains,” Mr. Jaishakar tweeted.

Nr, Jaishankar, accompanied by Mr. Mirozyan, also paid homage to Mahatma Gandhi at his statue in Yerevan. “Together, we planted a tree of friendship,” he said. He also met Indian students and Armenian friends of India in Yerevan and appreciated the efforts made by the Armenian government for the welfare of the students.

Mr. Jaishankar also visited the Matenadaran library, where a copy of the Mahabharata in Sanskrit is kept.

“The Armenia-India connect so visible in the Matenadaran library in Yerevan. First Armenian newspaper and constitution that were published in Madras (Chennai),” he tweeted.

Mr. Jaishankar began his day by paying homage at the Tsitsernakaberd Memorial Complex.

“This year will be an important year for the calendar of both our countries. For Armenia, celebrating the 30th anniversary of its Independence and we are celebrating 75 years of our Independence. Next year, which will be another milestone that will mark the 30th anniversary of the establishment of our diplomatic relations,” he said in the joint press meet.