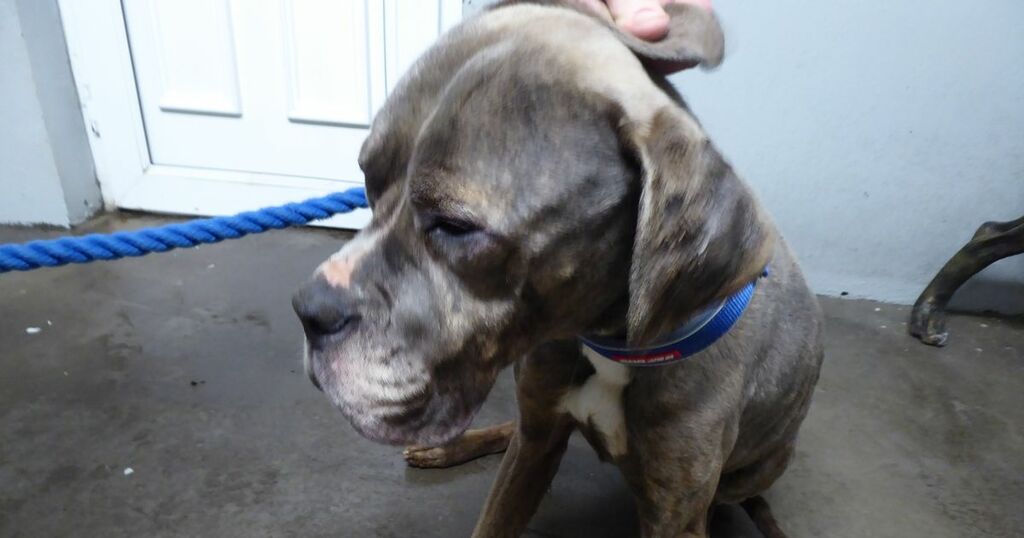 A man has been jailed after his "severely malnourished' dogs were found in a room smeared in blood and faeces – with maggots under a food bowl.

Images were released of the set-up discovered by Antrim and Newtownabbey Borough Council's animal welfare officer after visiting the Newtownabbey home of the dog's owner David Blair, 44.

When the officer entered Blair's home in Ballycraigy Park he found what Antrim and Newtownabbey Borough Council termed "two severely malnourished dogs" - one a Pug type dog and the other a Mastiff type dog.

During the visit in January 2020, the welfare officer discovered the dogs "living in a room with faeces and blood on the floor" and maggots under one of the dog's dishes.

The rear garden was covered in dog faeces.

The weight of one of the dogs had plummeted to less than 6kg and council chiefs said had the animal welfare officer not intervened "there was a great chance these dogs could have died".

Blair appeared via videolink and was sentenced at Laganside Magistrates’ Court on Friday, October 8 after previously pleading guilty to causing unnecessary suffering to a Pug type dog and a Mastiff type dog and failing to ensure the welfare of these dogs.

The charges were brought against the man by Antrim and Newtownabbey Borough Council under the Welfare of Animals Act.

Judge Conner branded it an "appalling case" and sentenced Blair to seven months for causing unnecessary suffering and handed Blair a four month custodial sentence for failing to ensure the welfare of the dogs - to be served concurrently.

Blair was also ordered to pay £100 towards Council’s costs, £100 in legal costs. Mr Blair was also disqualified from keeping animals for 10 years.

An Antrim and Newtownabbey Borough Council spokesperson said: "Proceedings followed an investigation by the Council’s Animal Welfare Officer who visited the property in January 2020.

"On inspection of the dog’s food dish, the officer observed maggots under it.

"The rear garden was covered in dog faeces. The dogs were taken into possession by the Council and transported to the Council vet for examination."

The spokesperson added: "“Toto” was examined and body scored 1/5 and weighed only 5.7kg and the second dog “Skye” a female Mastiff type was body scored 0/5 weighing only 26kg.

"In addition to their poor body conditions, both dogs were living in unacceptable conditions and were certified as suffering.

"The dog named Skye increased in body weight to 34.7kg and the pug “Toto” increased to 8.1kg. Had Animal Welfare not intervened there was a great chance these dogs could have died."

After the case the council said it operated a rigorous enforcement policy when it came to animal welfare.

A spokesperson for Antrim and Newtownabbey Borough Council said: “Council gives a high priority to the welfare of domestic pets and horses and operates a rigorous enforcement policy to ensure full compliance of regulatory requirements.

“Complaints are investigated thoroughly and where necessary formal action is taken, which may include the service of Improvement Notices, or in extreme cases, seizure of animals.

"The Council may also prosecute for offences such as in this case which I hope serves as a warning to anyone who does not take appropriate care of animals”.

If you have concerns about the welfare of an animal, you contact the Northern Region Animal Welfare Team on 028 2563 3134 or email animal.welfare@midandeastantrim.gov.uk