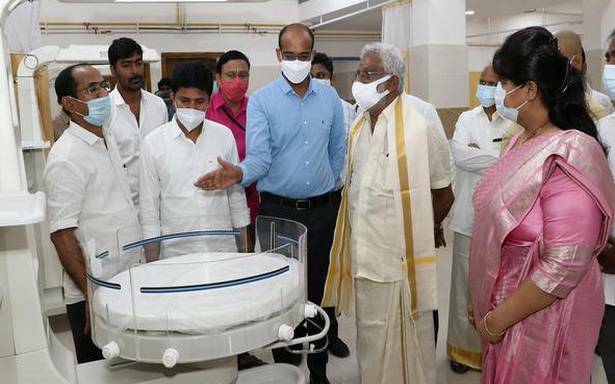 Chief Minister Y.S. Jagan Mohan Reddy is all set to inaugurate the renovated trekking route, ‘Go Mandiram’ at Alipiri, and the paediatric cardiac hospital on BIRRD Hospital premises during his visit to the city on Monday.

He also inspected the roof slab works on the Alipiri footpath being undertaken up by the Reliance company on donation basis.

Additional Executive Officer A.V. Dharma Reddy explained to him the significance of the footpath with the help of a video presentation.

The ‘Go Mandiram’ has ‘Saptha Gopradakshinasala’ and ‘Go Tulabharam’ donated by Chennai-based A.J. Sekar Reddy, where devotees can pray to seven cows ahead of trekking up the hill.

At the paediatric hospital, he inspected the ICU, operation theatres and the reception area.

Mr. Subba Reddy later told the media that the Chief Minister, ahead of offering the ‘silk vastrams’ on ‘Garuda Seva’ day during the ongoing Brahmotsavams, would declare open the temporary building coming up with ₹25 crore to house the paediatric hospital, the Alipiri footpath roof slab work completed with ₹25 crore, and the ‘Go Mandiram’ built with ₹15 crore.

At Tirumala, Mr. Jagan Mohan Reddy would inaugurate the second ‘Boondi Potu’ constructed with the funds donated by N. Srinivasan of India Cements and also inaugurate the Kannada and Hindi channels of the SVBC along with Karnataka Chief Minister Basavaraj Bommai.