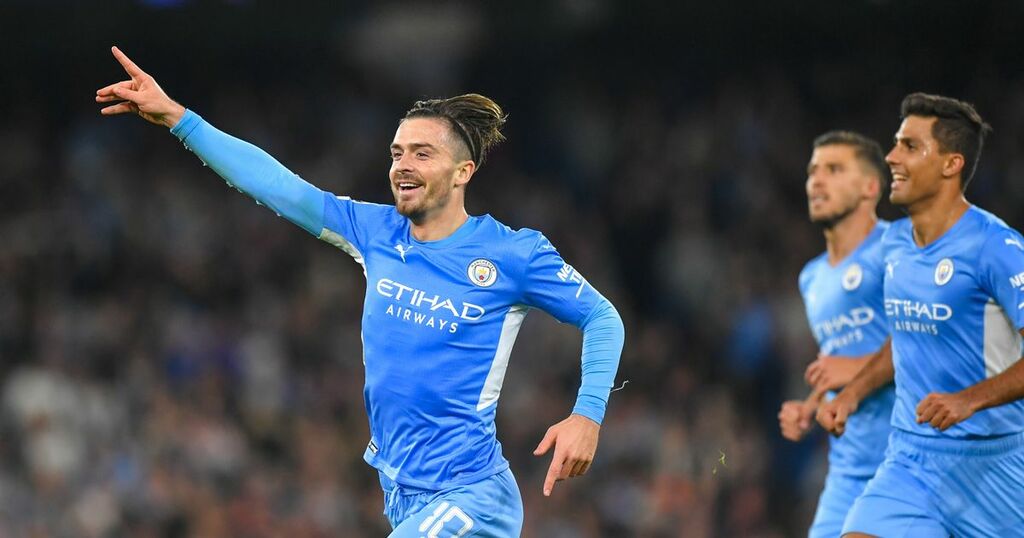 The £100million man said in the summer that Kevin De Bruyne was his favourite player, and made no bones about the fact that playing in this competition was a major factor in his desire to move to Manchester City.

Grealish got to make his European debut as the Blues saw off a persistent RB Leipzig side 6-3, and the new boy scored a fine goal along the way.

He also got to see, up close, the enduring quality of De Bruyne, which was another big factor in him coming to Manchester.

De Bruyne, making his first start of the season, was instantly back into the groove, spraying passes around and curving delectable crosses into the box - if Harry Kane was watching, at home, his heart must have sunk at what might have been.

The last time City played in this competition, there were tears on the pitch in Porto ,followed by what Rodri this week called “three s**t days” before the players were forced to lift their morale for for Euro 2020.

That night was especially traumatic for De Bruyne, who was forced off the field by a dreadful assault from Toni Rudiger which went unnoticed by the referee and the VAR.

It resulted in a fractured eye socket, and reduced City’s chances of salvaging anything from a game in which they were always second-best.

De Bruyne was a sobbing, distraught figure as the dream slipped away, and his summer went from disaster to calamity as another nasty unpunished challenge, this one from behind by Portugal’s Joao Palhinha, saw him tear ankle ligaments as Belgium reached the semi-final.

He risked everything by playing in the semi-finals as Belgium lost to Italy, and has been paying for it since.

The last 10 minutes of the opening-day defeat at Spurs was his only other time in a City shirt this season, until this game.

But what a return.

The only downer for City in an exciting game was that they conceded three goals - it took them ten games to let that many in last season, and Pep Guardiola will be holding some defensive inquests in the coming days. But it was great fun for the fans as City fought off a brave attempt by ambitious opponents.

Guardiola had a problem before the game with Aymeric Laporte and John Stones both injured - the manager suggested they were both suffering from international duty last week, which was odd as Laporte played 90 minutes for the Blues at Leicester.

But at least it gave Ake the chance to partner Ruben Dias rather than Eric Garcia, and with Aleks Zinchenko outside him rather than the vulnerable Benjamin Mendy.

And while it was his defending which was under scrutiny, he made his biggest impact at the other end, powering in the opening goal with a fine header from Jack Grealish’s corner.

Keeper Peter Gulacsi got to the attempt but was beaten by the strength of the header and could only turn it onto the underside of the bar and over the line o nudge the Blues ahead on 16 minutes.

The Dutchman’s only previous City goal was a consolation in the harrowing 5-2 home defeat by Leicester last season, so at least he could fully enjoy this one!

With De Bruyne in imperious mood, it was a matter of time before City built on the lead, and - of course - the second was all about De Bruyne.

He had already curved a couple of teasing, tantalising crosses into the box and when he produced the best of the lot on 28 minutes, and with Grealish lurking beyond the far stick, the bamboozled defender Nordi Mukiele got himself in a twist and headed beyond Gulacsi.

With United slipping up in Switzerland 24 hours earlier, and Liverpool finding AC Milan hard work at Anfield, it seemed it was down to last year’s finalists to plant the English flag in this year’s competition.

The Blues showed an uncharacteristic lack of determination to allow Leipzig a sniff of a comeback, with three players losing 50-50 duels as the visitors pressed - and when Emil Forsberg’s cross was headed back into the danger area by Mukiele, Christopher Nkunku planted the ball beyond Ederson.

But the element of doubt did not last long, as City forged forward again - and when Ferran Torres tried to hook the ball goalwards, it struck Lukas Klostermann’s out-stretched arm.

The VAR invited ref Serdar Gozubuyuk to take a look on the monitor, and he pointed to the spot as the game moved into first half added time.

Now came the hard part, for City. Mahrez took it upon himself and planted the ball beyond any hope of the goalkeeper reaching it.

With the two-goal cushion restored, City again looked set fair for a comfortable evening, but Leipzig would not lie down.

And when Dani Olmo streamed forward, helped by De Bruyne worryingly appearing to twist his ankle as he sought to chase, Nkunku was again on hand to head home from the former Barcelona academy player’s cross.

Then came the moment for which Grealish has waited half his life. Lurking out on the left touchline, he exploited the space left by Leipzig’s unflagging ambition, carved inside onto his right foot and creamed it perfectly into the far corner.

Everyone knows he is looking to cut inside, but few can do anything about it.

But Leipzig refused to give it up, and when Nkunku found space between Ake and Zinchenko and thrashed a shot past Ederson for his hat-trick, the gap was back down to one.

Cancelo took matters into his own hands, crashing a shot into the far corner from 25 yards to make it 5-3.

Still Leipzig raced forward, but their resistance was virtually over when former City man Angelino picked up a second yellow for a scything challenge on Cancelo, walking off to generous applause from the home fans - which he duly returned.

City still had one last goal in them, and as players queued up to claim it, the ball fell nicely for sub Jesus to turn it in at the far post.