Jack Grealish jinks through to seal England’s stroll past Andorra

By David Hytner at the Estadi Nacional 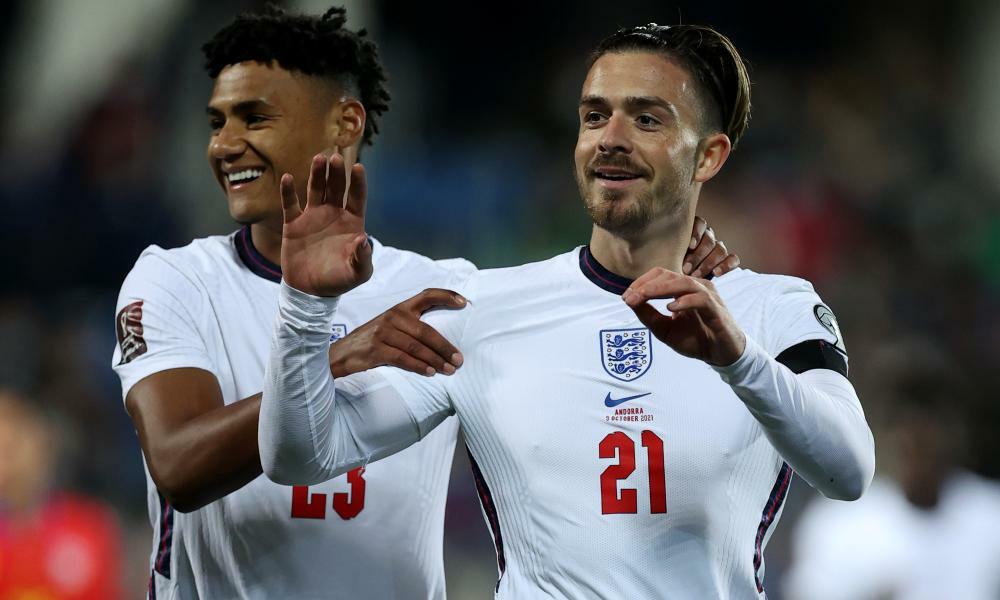 Perhaps the fire that laid waste to the TV gantry on Friday at this quirky stadium was a portent. When the action started, it was Phil Foden who channelled its fury, producing a scorching performance that was simply too much for Andorra.

The England midfielder called the tune from start to finish, driving the team with his easy balance and range of passing, with the scoop for the second goal, lashed home by Bukayo Saka, one of his many highlights.

It was only Andorra, the team ranked 156th in the world, but it was impossible not to get excited about Foden in this kind of mood, when he shows such control.

He seemed to enjoy himself more and more as the tie wore on, demanding the ball, running with it, slipping effortlessly past those in Andorran red and always making the right choices.

It was a good night all round for England on the much-discussed synthetic carpet here, with Jadon Sancho impressing, particularly in the first half, when he set up Ben Chilwell’s first international goal. He later served up another assist for Tammy Abraham to make it 3-0.

Gareth Southgate’s demand for slickness and bravery was heeded as England added a late gloss to the scoreline which better reflected the gulf between the teams. It was attack versus defence throughout; men against boys.

Jack Grealish, who entered as a substitute, won a penalty that James Ward-Prowse converted at the second attempt – his initial kick having been beaten out by Josep Gómes. And it was Grealish who ran on to a long ball from the goalkeeper, Sam Johnstone, towards the end, showing his strength to hold off his defender, before arrowing a low shot into the corner. Job done. And with a flourish.

It had felt like a minor miracle that the TV gantry had been rebuilt – who would have known? And the England fans who made themselves heard in the 2,285 crowd were left to drink in the other details of this most unusual of grounds.

One side of it was overlooked entirely by blocks of apartments – whose balconies offered a kind of executive box experience – and, if one looked hard enough into the night behind them, it was just about possible to make out the silhouette of the Pyrenees.

Southgate had talked beforehand of needing his No 10s – in other words, his more technical forwards – rather than his No 8s to get in between the lines, to make things happen, and so in from the start were Foden, Jesse Lingard, Saka and Sancho.

Foden to Sancho with the fizzed diagonal to the left was a feature of the opening exchanges, as Andorra drew the lines for the siege, and it was this combination that created the breakthrough. This time Sancho had darted into the area for the ball and it was a lovely piece of control and awareness from him. He checked back to tee up Chilwell, who lashed home from close to the penalty spot.

The goal was initially ruled out for offside but VAR stepped in to advise Kateryna Monzul – who became the first woman to referee a senior men’s England game – to overrule. After a lengthy wait she did so and Chilwell could celebrate.

It was a case of third time lucky for Chilwell, who had twice gone close previously following Foden passes; he might have done better with the second chance. And it was a goal that was loaded with personal significance, given how Chilwell had barely featured at Euro 2020 and has struggled for minutes at Chelsea in the early season. The left-back was a late call-up by Southgate, having been omitted in September.

The overall vibe was afterwork-on-the-astro; one team palpably better, the other looking forward to the beer afterwards. England’s dominance of possession was absolute – a whooping 86% – and it was difficult to recall Andorra stringing three passes together. The only question concerned what England could create.

Abraham worked the keeper Gómes in the first half while John Stones headed high after a Ward-Prowse free-kick when he should have scored. Foden’s assist for Saka was lovely, with the winger’s touch equally eye-catching before the finish, and the biggest threat to England appeared to be Andorra’s desire to push the limits of what was acceptable in tackles.

There was an undercurrent of needle, which kept Monzul busy, and nobody in England colours was happy when Jesús Rubio left something on Sancho, needlessly, in first-half stoppage time. Southgate looked incensed and Sancho had to be held back as he departed for the interval, gesturing to Rubio as if to indicate he would like to continue the argument in the tunnel.

Midway through the second half Marc Rebés cleaned out Conor Coady with an elbow, which might have been a red card but was surely a second yellow. Monzul let the midfielder off.

Sancho was a prominent subplot in his first action since the Euro 2020 final, when he was one of the England players to miss his kick in the penalty shootout defeat by Italy. It felt like a warning when Southgate said he had not deserved to be picked on his Manchester United form; he needed to perform. And he did.

It was his cross from which Abraham flicked wide on 57 minutes and, when he picked him out again moments later, the centre-forward made no mistake. England were on the way to lengthening their stride.