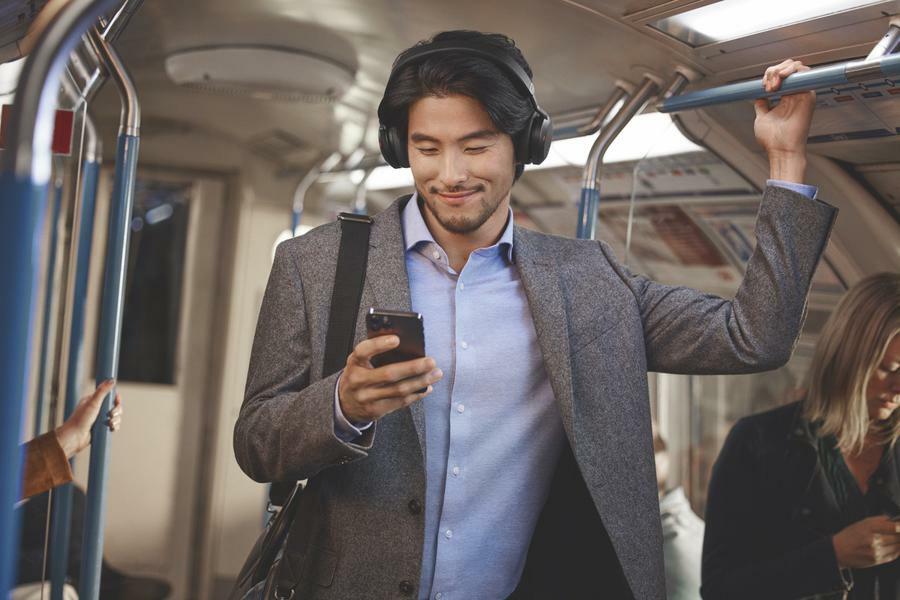 Jabra is well-known for making some great headsets that are used in call centers all over the world. However, now that so many of us are working from home, Jabra decided that it needed to converge some of the technologies found in its consumer and enterprise headsets to create a new model that would offer the best of both worlds so that people working from home can have the best tool to do their job.

Today Jabra is unveiling the latest addition to its Evolve range of enterprise headsets. The Evolve2 75 is a bit special and has been designed with homeworkers in mind. The new headset introduces some new features designed to make flexible working simpler and more productive.

Comfort is very important when wearing a headset for an entire working day. To improve comfort, Jabra has engineered the headset with a superior ergonomic fit that has on-ear cushions made using two types of foam. One type of foam is designed to keep out as much sound as possible, while the second type is there for a more comfortable fit. The new ear cushion design improves ventilation while reducing ear pressure at the same time. The curvature and padding used in the Jabra Evolve2 75’s headband keep the headset in place and improves the overall active-noise cancellation performance of the headset.

The Evolve2 75 is Jabra’s first headset to have fully adjustable Jabra Advanced Active Noise Cancellation (ANC). The wearer can select from five levels of active noise cancelation to block out as much of the surrounding noise so they can hear properly. In a busy office, the user might select an ANC setting of 4 or 5, while a homeworker might only need to have level 1 or 2.

The headset also has an adjustable ‘HearThrough’ feature that enables the user to quickly switch to hearing the sounds around them. This is a handy feature for anyone looking out for a travel announcement at a railway station or the sound of the courier knocking on the front door.

The Evolve2 75 also has a function called MySound using Jabra’s Sound+ mobile app that can survey the wearer’s hearing and then customizing it to match their hearing profile. This means no two pairs of Jabra Evolve2 75 will sound the same as they are tailored to the user’s hearing ability. This feature is particularly handy when using the Evolve2 75 to listen to music.

Thanks to 40mm custom drivers, the headset is as good for listening to a favorite album as it is for taking calls. There’s support for SBC and AAC audio codecs and dual-link technology enables two devices to be connected at the same time. The two devices could be a computer for taking part in video calls, plus a smartphone for taking personal calls. Switching between the two is seamless and Jabra even has an app that makes the whole setup automatic.

One of the most noticeable new features of the Jabra Evolve2 75 is the new auto-answer-enabled microphone boom arm. This new microphone arm is 33% shorter than the previous Evolve 75 design, giving the users greater flexibility and better audio thanks to beamforming microphones. The boom arm meets Microsoft’s stringent Open Office requirements and, when flipped down in Performance mode, it can effectively cut the ambient sounds from an open-plan office or any loud and busy areas.

The boom arm has a discreet mode whereby it can be folded away into the right-hand earcup for when the user wants to make a call without dropping the boom arm down. The headset has no fewer than eight microphones that work with a dedicated triple chipset-powered algorithm that can tell the difference between the user’s voice and other voices in the room. The result is fewer noisy calls and the ability to filter out other voices in the room.

The Evolve2 75 includes a red ‘Busylight’ that can be seen from 360°, so colleagues can easily see when not to interrupt the user. Jabra has also optimized the Evolve2 75 for all the leading Unified Communications platforms and even has a dedicated button for use with Microsoft Teams.

Jabra Xpress software makes it easy for IT departments to deploy headsets to home workers and it can be used centrally to update firmware and manage the headset settings remotely. The working range of the headset is up to 30 meters with a robust signal and dual connectivity. The built-in batteries of the Evolve2 75’s have up to 24 hours of talk time and a very useful 36 hours of playtime when listening to music. Recharging the headset is swift when used with the fast-charging capabilities of the charging dock that’s supplied with the headset.

This newest headset from Jabra has a lot of consumer features that homeworkers will welcome. From the specifications that I’ve seen quoted, the Jabra Evolve2 75 is the company’s best model yet and will be a welcome development for homeworkers who make phone calls and take part in video conferences about the day. I’ll have a full review for you as soon as I can.