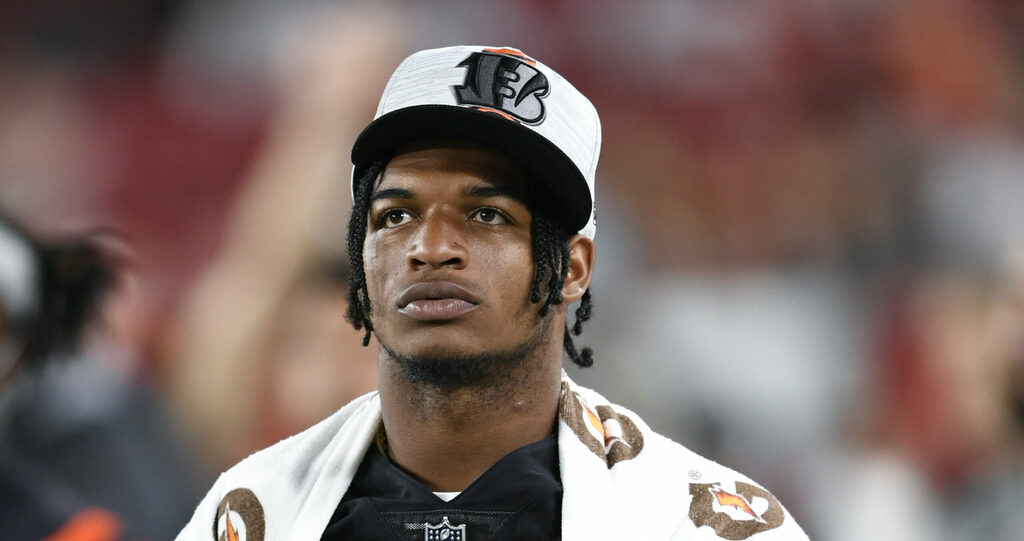 Ja’Marr Chase was an absolute stud at LSU. He caught 20 touchdowns his sophomore season with Joe Burrow under center and helped lead the Tigers to a national championship.

He sat out the next season with his draft stock pretty much solidified as a top-10 pick and a pandemic raging on, which still feels like the correct decision.

But now, it seems, the magic he had in college with Joe Burrow just hasn’t really translated at all to Cincinnatti. At least not so far.

Chase struggled mightily this preseason with holding on to the ball. His drops have been a huge issue.

He was asked about the issue by Bengals.com and his response was, well, it was very concerning.

“The ball is different because it is bigger. It doesn’t have the white stripes on the side so you can’t see the ball coming from the tip point so you actually have to look for the strings on the ball at the top, which is hard to see because the whole ball is brown and you have six strings that are white. But for the most part, just have to get used to it and find out what I am comfortable catching.”

None of that sounded good. Absolutely none of it. Chase is actually telling us he struggles to catch NFL balls because he’s not seeing them. And you never want to hear that from the number 5 overall draft pick.

Of course, not all is lost. He just struggled in the preseason. It happens. We’ve seen his talent and, while this is concerning, it doesn’t wipe any of that away.

He continued to say “There’s a bigger ball adjustment, so I don’t want to make excuses but I’ve just got to be a pro and make the catch.” So it’s clear he knows what he needs to do.

Let’s just hope he does it.