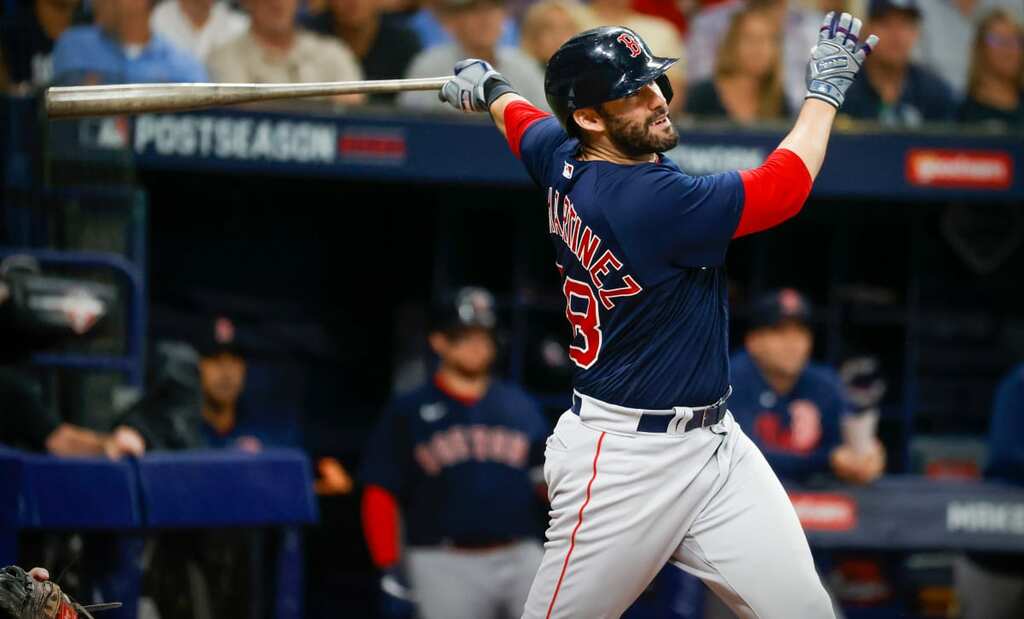 ST. PETERSBURG, Fla. — The Red Sox were slow to release their lineup on Friday. The team took the field for batting practice. It hit for an hour. Both the Dodgers and Giants—whose game was scheduled to start two hours after this one—released their lineups out on the West Coast. And still there was no sign of a starting nine for Boston.

There was no attempt at gamesmanship or secrecy here. (Skipper Alex Cora freely rattled off the first four hitters when asked before the game; it was the rest, he said, of which he was still unsure.) There was simply a genuine question: Would J.D. Martinez be healthy enough to play? With the Red Sox down 1–0 to the Rays in the ALDS, any extra offense seemed crucial, and as time pressed on without confirmation on the slugger, it felt like the fate of the team was stuck in abeyance. Martinez had missed the first two games of the team’s playoff run thanks to a freak injury sustained on the last day of the regular season—spraining his ankle when stepping on second base while on his way out to right field. It was still unclear if he’d be able to contribute five days later.

The team’s doctors told Martinez that if the injury had happened during the summer, it would have been “for sure” a trip to the 10-day IL. In October? “It’s the playoffs, you know?” Martinez said. “You only get one chance at this.”

So he took batting practice on Friday after what he described as a collaborative effort from the team staff: athletic trainers, strength coaches, massage therapists and hitting coaches. After one round of BP, Martinez told Cora that he thought he was ready to go, able to follow through his swing and land on his front foot in a way that had not been true even 24 hours before.

The lineup finally came a little more than an hour before first pitch, and his name was written in the sixth spot, the designated hitter. And if there were any lingering doubts about his status, he soon put them to rest. In the fifth inning, Martinez saw a hanging slider, and he sent it to centerfield for a go-ahead, three-run home run.

“Just having his presence there in the lineup… Not enough can be said about what J.D. did tonight,” said centerfielder Kiké Hernández. “For him to come through like that and help the team in that big of a way—it was huge.”

Martinez ultimately went 4-for-5 with a double in addition to that home run. It was just one piece of a monster offensive night for the Red Sox. In what became a 14–6 win, the team homered five times, a playoff record for the franchise. Hernández, Xander Bogaerts, Alex Verdugo and Rafael Devers also went yard. A night after much of Boston’s hard contact had been thwarted by Tampa Bay’s well-positioned defense, the Red Sox found success with a different recipe—simply hitting the ball out of the park as often as possible.

“You just make a mistake in the playoffs, and a lot of them you get away with,” said Rays reliever Collin McHugh, who allowed the home runs to Hernández and Verdugo. “We didn’t get away with a lot of them today, and that’s hats off to them.”

Sign up to get the Five-Tool Newsletter in your inbox every day during the MLB playoffs.

It was an uncharacteristically sloppy night for the Rays’ bullpen—which is typically one of the team’s greatest assets. But after a shaky outing from rookie starter Shane Baz, who was pulled in the third inning after allowing three runs, the ‘pen unraveled entirely. McHugh had given up only three home runs all year before allowing two on Friday. Matt Wisler gave up the shot to Martinez, and the situation went all the way off the rails in a few innings of work from Michael Wacha, who allowed six runs on nine hits. Rays relievers repeatedly left pitches over the plate that they shouldn’t have, and Red Sox hitters repeatedly made them pay.

In all, Boston racked up 20 hits, more than Tampa Bay had allowed in a game all season. Rookie pitcher Tanner Houck provided five sharp innings of work that gave the Rays little opportunity to mount a comeback. It was the kind of dressing down that is unfamiliar to Tampa Bay, who frequently dismantled opponents with damning, near-surgical precision to achieve their record as the best team in the American League. And for the Red Sox, who recorded neither a walk nor a home run in a frustrating loss in Game 1, it was a statement win for Game 2—with one of their best hitters back in the lineup, even if it took almost until game-time to get him there.

“There’s a lot of things that kind of didn’t go our way yesterday,” Martinez. “I felt like today—the guys just carried into today.”