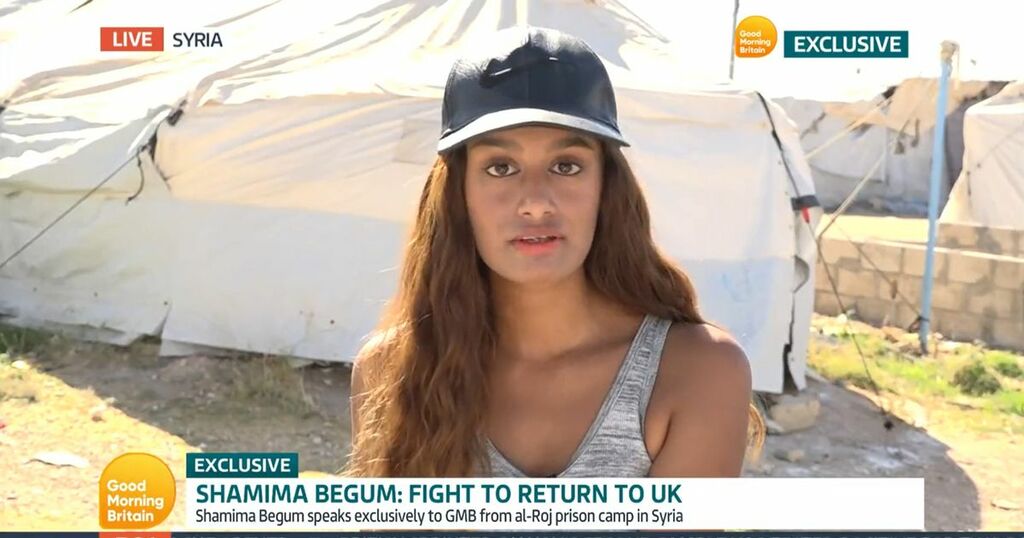 The 22-year-old ran away from Bethnal Green around six years ago to join ISIS as a bride and has been the point of controversy ever since over her citizenship and who should deal with her.

Speaking on ITV's Good Morning Britain, she said she understood it was hard for the British people to forgive her but she has lived in fear of ISIS as they have, BirminghamLive reports.

Speaking from Syria and wearing a Nike baseball cap and grey vest, Begum said she came to Syria expecting simply to get married, have children and "live a pure, Islamic life".

"The reason I came to Syria was not for violent reasons."

She added: "At the time I did not know it (so-called Islamic State) was a death cult, I thought it was an Islamic community I was joining.

"I was being fed a lot of information on the internet by people."

She told Good Morning Britain: "I am willing to go to court and face the people who made these claims and refute these claims, because I know I did nothing in IS but be a mother and a wife.

"These claims are being made to make me look worse because the Government do not have anything on me.

"There is no evidence because nothing ever happened."

She added: "I would rather die than go back to IS."

Begum said she regretted her actions and apologised for the comments she previously made about the Manchester Arena bombing.

She said she thought she was "groomed and taken advantage of and manipulated into" travelling to Syria.

When asked why she cannot go to Bangladesh as a citizen through descent, Shamima Begum told Good Morning Britain that she would face the death penalty there.

She said: "I've never been to Bangladesh, I do not have claim of Bangladeshi citizenship.

"Bangladesh has already said that they will never let me back in and they said If I do ever come back in, it will be the death penalty for me."

Begum added: "How can a country like the UK, who does not believe in the death penalty, how can they expect me to go to a country where I will be killed."

She told Good Morning Britain said: "I know there are some people no matter what I say or what I do, they will not believe that I have changed, believe that I want to help.

"But for those who have even a drop of mercy and compassion and empathy in their hearts, I tell you from the bottom of my heart that I regret every, every decision I've made since I stepped into Syria and I will live with it for the rest of my life.

"No one can hate me more than I hate myself for what I've done and all I can say is I'm sorry and just give me a second chance."